Wedding guest, 60, develops ‘broken heart syndrome’ after eating a teaspoon of WASABI that she mistook for avocado

A woman developed ‘broken heart syndrome’ after eating too much wasabi, a case report has revealed.

The unnamed 60-year-old claims she ate a teaspoon of Japanese horseradish after mistaking it for avocado at a wedding.

She originally had chest pain which subsided on its own. The next day, she went to hospital complaining that she felt weak.

Doctors in Israel then diagnosed her with takotsubo cardiomyopathy, also known as broken heart syndrome.

The condition occurs when the left ventricle expands and changes shape, causing the heart to become weaker.

Medics claim it is the first reported case of food triggering the condition, aside from anaphylaxis. She had a full recovery within a month. 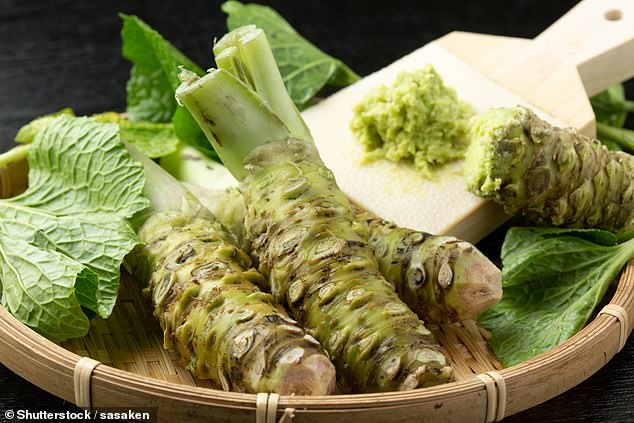 The woman, whose tale was in the BMJ Case Reports, was treated at the Soroka University Medical Center in Beer Sheva.

Takotsubo cardiomyopathy occurs when the heart is unable to pump blood around the body as efficiently as it should, according to the British Heart Foundation.

Its cause is unclear, however, takotsubo cardiomyopathy is usually brought on by stress during times of bereavement, domestic abuse or financial worries.

‘The only reports of this syndrome triggered by food described anaphylaxis as the mechanism causing takotsubo,’ wrote the authors, led by Dr Alona Finkel-Oron.

However, the medical team added that anaphylaxis – which can be life-threatening – ‘was not present in our case’.

‘To the best of our knowledge, this is the first report of takotsubo cardiomyopathy triggered by wasabi consumption,’ they said.

Within minutes of the woman eating the wasabi, she felt a pressure in her chest that spread to her arms, where it stayed for several hours.

She decided to stay at the wedding, with the pain gradually subsiding. The next day, the woman went to hospital after feeling weak and having ‘general discomfort’.

The woman’s heart rate and blood oxygen level were also normal, and she showed no signs of having a fever.

The woman then had an electrocardiogram (ECG), which checks the heart’s rhythm and electrical activity.

The test, conducted in the emergency department, came back normal. However, it also showed ‘ST segment elevation’.

This is a sign part of the heart tissue has died after being obstructed during a heart attack.

A second ECG was carried out 12 hours later, which showed irregularities between her heart beats.

Tests then revealed her troponin levels were abnormally high at 424ng/L.

Troponin is a protein, with high levels suggesting damage to the heart. The normal range is between zero and 14ng/L.

WHAT IS BROKEN HEART SYNDROME?

Broken heart syndrome, known medically as stress-induced cardiomyopathy or takotsubo syndrome, happens when the heart fails because of extreme stress.

It is usually triggered by an emotional event such as the death of a loved one.

The condition affects around 3,000 people a year in the UK, and is more common among women than men.

It causes part of the heart to become temporarily enlarged, preventing the organ from pumping blood properly. It can cause it to stop altogether.

Although broken heart syndrome is not triggered by disease – it isn’t linked to blocked arteries or high blood pressure – it is believed to be able to cause long-lasting damage by weakening the heart and affecting its pumping motion.

‘Fortunately, in the vast majority of cases the heart muscle function recovers within a few weeks. It is a rare condition overall. Most frequently it affects people in their 50s or 60s, although it has been seen in other age groups.’

The woman was treated with a nitroglycerin spray beneath the tongue. Nitroglycerin relaxes and widens blood vessels, easing chest pain.

This is defined as a plaque that is not expected to be severe enough to obstruct blood flow or cause chest pain.

Further examinations showed the woman had ‘reduced function’ in her left ventricle, alongside decreased movement in her heart muscles.

Together, all of the woman’s symptoms were ‘consistent with a non-classic takotsubo cardiomyopathy’, the authors wrote.

Two days after she was admitted to hospital, a test showed she had ‘moderate to severe left ventricular dysfunction’.

Her left ventricular ejection fraction – the total amount of blood pumped from the left ventricle per heart beat – was 35 per cent. Between 55 and 75 per cent is normal, according to the Cleveland Clinic.

The woman was treated with ACE inhibitors, beta blockers and the diuretic aldosterone antagonists. She was then referred to a cardiac rehabilitation centre.

A follow-up appointment a month later showed she had normal left ventricular function, with an estimated ejection fraction of 60 per cent.

The wasabi is thought to have triggered an excess of catecholamines, a class of hormones that are released during stress. The ingredient may also have led to ‘hyperactivity of the nervous system’.

The woman is thought to have been more at risk due to her non-obstructive coronary artery disease.

Studies have shown wasabi to have ‘neuroprotective, anticancer and antioxidant activity’, the authors wrote. However, these trials typically only tested ‘low doses of the ingredient’, they added.

The doctors believe the woman consumed around a teaspoon of wasabi, which is ‘unusually large’.