Woman, 25, could barely walk due to vagina injury after being tossed off her jet ski and landing on the handlebars – leaving a swelling blood clot that needed to be surgically drained

In a case report, published in the British Medical Journal Case Reports, the 25-year-old arrived at Professional Brooklyn Gynecological Services in New York three days after the incident.

She told the doctor that, in July 2018, she had been tossed into the air off her jet ski and landed directly on her handlebars.

The accident had left her with a hematoma, a collection of clotted blood vessels, on her vulva that measured about 12 centimeters and she was in so much pain that she couldn’t walk.

Her gynecologist told her that the hematoma needed to be drained but the woman was worried about scarring, so the procedure was done intravaginally instead of externally. 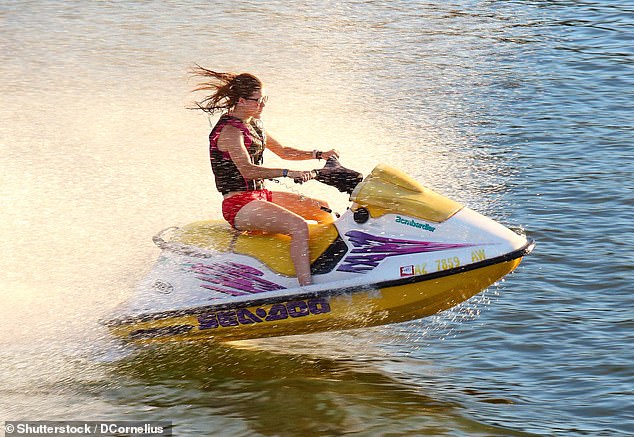 A 25-year-old woman from New York was left with a vulvar hematoma, a collection of clotted blood vessels in the vulva, after she landed on the handlebars of her jet ski during an accident (file image)

A vulvar hematoma is a collection of clotted blood vessels that pools in the vulva, which is the external part of the vagina.

It occurs when blood vessels rupture, usually from an injury, and blood collects in the nearby tissues. Patients usually experience pain, swelling, discoloration of the skin and difficulty urinating.

Vulvar hematomas not related to childbirth are very rare. They have an incidence rate of about 3.7 percent and make up less than one percent of all gynecologic admissions to a hospital.

‘Usually if someone doesn’t have an expanding hematoma, if it’s not actively bleeding, there’s no need for immediate [surgical evacuation],’ co-author Dr Ghanshyam Yadav, an obstetrician/gynecologist at Baylor College of Medicine in Houston, Texas, told DailyMail.com.

‘That can lead to more bleeding. You don’t want to cut into a part of the body you don’t have to, so you first want to try conservative management.’

This means patients are given pain medication, anti-inflammatory drugs and ice packs in an attempt to reduce the pain and swelling.

Dr Yadav said that immediately after the accident, the woman had gone to her local emergency room in New York and was treated with these methods.

But, by the time she arrived at Dr Amir Marashi’s office in Brooklyn, New York, three days later, she was in so much pain that she couldn’t walk.

Dr Marashi – the so-called Vagina Whisper – examined the woman and determined that her vitals were stable and that she hadn’t fractured her pelvis during the accident, which would have required immediate surgery.

However, because of how large the hematoma was – it was covering her left labia, or vaginal lip – it would need to be surgically drained.

‘It was like almost having a grapefruit in between her legs,’ he told DailyMail.com. ‘It was a pretty large hematoma, really deep, and she couldn’t walk around.’

The patient, however, was skeptical because she was worried about having scarring on her vulva.

‘Scar [on the genitalia] can be devastating to a patient, to their self-confidence,’ said Dr Yadav.

‘At the end of the day, the way that male and female psychology works is you have to be sexually comfortable with yourself.’

So Dr Marashi decided to drain the hematoma intravaginally instead of externally, and made an incision in the left vaginal sidewall, which allowed for minimal suturing and scarring.

‘They teach us [in residency] to make an incision from the outside,’ said Dr Marashi.

‘I don’t know any reports from any textbooks that show how to drain from the inside and I told her: “If it doesn’t work, we’ll have to do this from the outside.”

‘It’s more challenging and difficult because you don’t have direct access but we were able to empty the entire hematoma through this incision.’

According to the case report, after the procedure, the patient said her discomfort was immediately resolved.

‘Once you’ve drained the clot and evacuated the cavity, there is no more swelling so the pressure is relived,’ said Dr Yadav.

Because there is no consensus on practice guidelines, Dr Marashi says surgeons should take into account methods that will minimize scarring.

‘We have to try more and more as physicians to do everything that is more cosmetically pleasing,’ he said.

‘Some people may think it’s vanity but, at the end of the day, if you can do it in a way where things look better, why wouldn’t you?’