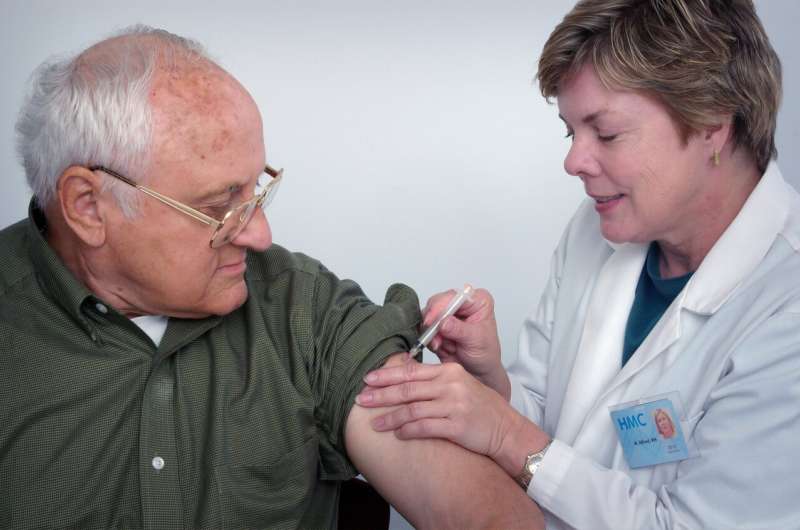 In search of a COVID-19 vaccine for her dad, Amber Dow was hitting one dead end after another.

Retail pharmacy websites declared “appointments unavailable.” Slots at local medical centers kept disappearing before she could type in any information.

Then she received a private Facebook message from a stranger: Go to the Jewel-Osco website right now. Enter your ZIP code. It’s in Palatine.

She immediately followed the instructions and snagged one of the grocery store’s last few open spots that day. Her father, 80-year-old Duane Dow, got his first shot on Wednesday.

The tip came from the Facebook site Chicago Vaccine Hunters, a group of more than 10,000 members who collect and share information on where to get vaccinated in real time, as new locations and time slots emerge.

“I was stunned,” said Amber Dow, 44, of the West Lakeview neighborhood. “I was encouraged by the display of common humanity and compassion and desire to be of service, without any expectation of anything in return. It was just purely to give.”

With COVID-19 vaccine in short supply, more locals are turning to social media for help as they scour the internet for available immunizations.

On Reddit, hundreds of posts offer tips and instructions for signing up for the shot in the Chicago area, from step-by-step guides for enrolling at different pharmacies to clues on best times to check various websites. Another Facebook group, Midwest Vaccine Hunters, has more than 1,700 members from across the region.

Similar sites are sprouting up in Minneapolis, Baltimore, Colorado and other parts of the country. The website www.vaccinehunter.org also offers advice from across the nation.

As for Chicago Vaccine Hunters, the Facebook page began earlier this month with general tips and advice, but evolved into individuals helping one another directly, in many cases even booking appointments for those who can’t do so on their own.

“Everyone’s helping each other out in different ways,” said Chicago resident Roger Naglewski, who created the site earlier this month.

A group of about four dozen volunteers began working directly with other members to track down open slots for them. Naglewski estimated these helpers—dubbed “vaccine angels”—have hunted down more than 200 vaccine appointments for other members, mostly for seniors with limited technology or difficulty traversing the online maze of pharmacies, government agencies and health care providers.

When Amber Dow joined the Facebook site, she was expecting general information or to be steered in the right direction.

She was stunned when Gladys Rosas, another member she had never met in person, reached out and sent specific open appointments tailored to her location and availability. Rosas had also combed the internet to help several relatives get vaccinated and wanted to share her expertise.

It was an unexpected human connection amid an otherwise confounding and impersonal process.

Over a series of private messages, Dow shared with Rosas that her father, who had some heart problems, was being discharged from the hospital shortly and she wanted him inoculated as soon as possible. She was worried about his health already, and the thought of him catching COVID-19 was terrifying.

“I’m in health care so I know how important it to help folks like your dad get this vaccine,” responded Rosas, a physical therapist who lives in north suburban Morton Grove.

The next day, Dow sent a photo of her dad at the grocery store post-vaccination, reiterating their thanks. Duane Dow, a longtime Chicago-area sportscaster, said he feels “terrific” knowing he has greater protecttion against the virus.

“I didn’t expect anyone to individually help me at all,” his daughter said. “I was just so taken aback by how big her heart was.”

Rosas said she’s continuing to help others get vaccinated.

“I know how scary it can be when you have family members that are in the high-risk group and you want to do what you can to protect them,” she said. “I’ve still been checking the site to do the same for others.”

Requests for help or new tips are posted periodically on Chicago Vaccine Hunters, as members figure out a best time for fresh appointments or a new location offering doses.

I have gotten lucky with Walgreens around 1:30 in the afternoon. Try and have several ZIP codes to try between.

I just got (an) appointment at Loyola for March 5 online. Thanks to the beautiful person who put the info on here.

It’s a late notice but I have to cancel my father’s (appointment) at Jewel-Osco today at 10 a.m. He had a stroke yesterday and is in the hospital. Want someone to take his spot. Will be canceling in few min if anyone wants it. Thanks!

Naglewski organized the site in early February, initially thinking it might attract a couple hundred members. In less than two weeks, membership grew exponentially; some posts talked about starting similar sites in other cities across the country.

“It’s really exploded more than I ever thought,” he said.

While the process of tracking down doses can be maddening, Naglewski believes seeing posts about others finding appointments or getting their first shot offers some encouragement to those still searching.

“People get frustrated,” he said. “It’s like grabbing concert tickets—you can’t click the button fast enough. When I see people get discouraged, I think it’s important to give people some hope.”

He added that he doesn’t blame government agencies or the retailers providing immunizations for the convoluted process.

“This is really unprecedented times,” he said. “I don’t think there was a playbook for how to manage this virus. So I think they’re doing the best they can under some really tough circumstances.”

This includes a team of members who banded together to find appointments for seniors, sometimes booking them directly for those who need help, sometimes tracking down appointments and then walking the fellow member through the process.

Many of those helped by the Facebook site lack smartphones or have spotty internet, tools critical to accessing vaccine. Some struggle to stay awake until midnight or early hours of the morning, when some retailers offer new appointments.

“If we didn’t have those angels out there helping senior citizens, there might be hundreds without appointments,” Naglewski said.

One member recently posted concerns about the potential for scammers to target the site, cautioning membership to be wary and never give out sensitive information like a Social Security number.

“I think it’s important for people to be very careful and cautious,” Naglewski said, adding that members seeking help don’t have to give any personal information to get assistance, if they’re uncomfortable doing so.

In general, the Illinois attorney general’s office advises the public to ignore unsolicited online, phone and text offers for the COVID-19 vaccine.

“Hang up on any calls, including robocalls, which direct you to take immediate action or provide personally-identifiable information, such as your Social Security number or bank account number,” the agency said. “Do not buy any kind of COVID-19 vaccine or treatment on the internet or from an online pharmacy. You should not have to pay any amount of money out of pocket in order to receive the vaccine. Everyone eventually will be able to receive the vaccine, even if they do not have health insurance.”

“I was elated,” said Ash, 35, of the Old Town neighborhood. “I was just so grateful to give them some autonomy back in their life, to give my mother something that gave her peace of mind.”

Soon she began hunting for appointments for other seniors, joining the “vaccine angel” team through the Facebook site.

“Because not everyone has a daughter,” she said. “To see senior citizens scrambling for vaccine shots has been very humbling.”

After receiving the first shot, one woman publicly thanked Ash for her assistance on the Facebook page.

“This group has done so much for so many, and my only payback is to try and help others in any way I can,” she posted on the site. “My wish is for everyone on this page to have their own success story to post!”

On Friday, Illinois surpassed 2 million COVID-19 vaccinations administered statewide, according to public health officials. About half a million people have received both doses, not quite 4% of the population.

To Ash, each person who gets immunized is one more step toward herd immunity and a potential end to the pandemic. She longs to safely get together with family and friends, and attend large public events and community gatherings once again.