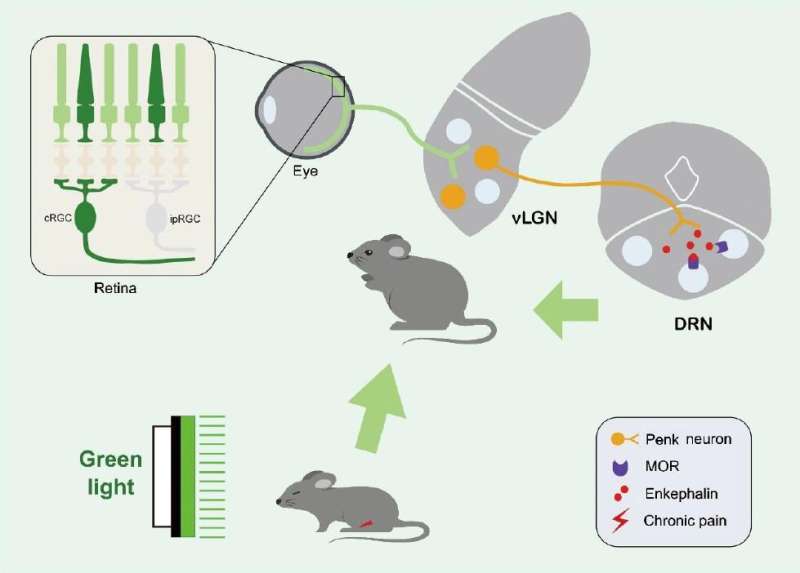 A team of researchers at Fudan University’s, State Key Laboratory of Medical Neurobiology and MOE Frontiers Center for Brain Science, Institutes of Brain Science, in China, has traced neural activity from the eyes to the brain in mice to find out why green light helps to reduce pain. In their paper published in the journal Science Translational Medicine, the group describes studying each part of the visual neural system in mice, from the back of the eyes to the brain, to learn more about how light can impact sensations in the brain.

Prior research and anecdotal evidence have suggested that green light, particularly green light generated by LEDs, can reduce pain levels in people with conditions such as arthritis, migraines and fibromyalgia—but the reasons have remained a mystery. In this new effort, the researchers sought to find the answer.

The researchers studied all of the parts of the visual processing system in mice that are involved in receiving and processing light. They began with the rods and cones photoreceptors on the outer part of the retina and retinal ganglion cells (ipRGC) in the inner part of the retina. By disabling each at different times and then testing how they led to changes in pain experience, the researchers found that the neural pathway to pain relief began with the photoreceptors.

The team then moved on to retinal ganglion cells, which receive signals from the photoreceptors. They used genetic silencing to learn more about which of the cells was responsible for communicating with the ventral lateral geniculate nucleus in the thalamus.

Next, the team monitored such signaling as different colors of light were directed into the eyes of the mice and found that green light resulted in more GABA signaling, which resulted in more expression by the Penk gene which encodes for a protein called PENK. And PENK is a precursor for a molecule called ENK, which activates opioid receptors in the brain. And that leads to the dulling of pain.

The researchers next plan to look into the question of why the brain has evolved in a way that allows green light to reduce the sensation of pain.