As the highly contagious delta variant of the coronavirus gained traction around the world, the World Health Organization urged vaccinated people to continue to wear masks and social distance, according to reports.

“Vaccine alone won’t stop community transmission,” Dr. Mariangela Simao, WHO’s assistant director-general for access to medicines and health products, said during a briefing in Geneva, according to CNBC. “People need to continue to use masks consistently, be in ventilated spaces, hand hygiene … the physical distance, avoid crowding. This still continues to be extremely important, even if you’re vaccinated when you have a community transmission ongoing.”

Director-General Tedros Adhanom Ghebreyesus on Friday called the delta variant “the most transmissible of the variants identified so far … and is spreading rapidly among unvaccinated populations,” the Voice of America reported.

The recommendation comes weeks after the U.S. Centers for Disease Control and Prevention said vaccinated people can go most places without masks. However, federal mandates remain on airplanes, for example.

The U.S. has a higher vaccination rate than many countries struggling with the variant, and daily infection rates have fallen sharply in the U.S. in the last few months as more Americans have gotten the vaccine.

At least 53.9% of the U.S. population has received at least one dose of the vaccine, 63% of Americans over 12 as of Saturday, according to the CDC. Children under 12 are not yet eligible for the vaccine. 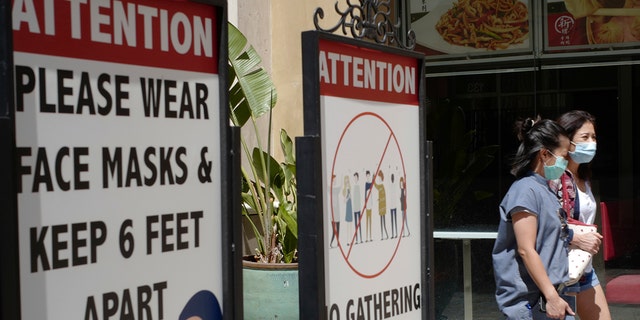 The Delta variant has primarily taken hold in countries that haven’t been able to beef up their vaccine numbers but it has spread to the U.S.

In the United Kingdom, the variant is now responsible for 90% of all new infections. In the U.S., it represents 20% of infections, and health officials say it could become the country’s dominant type as well.

The vaccines are considered “highly effective” against the delta variant, according to a recent study by the British government, although slightly less than the original strain.

But the WHO urged those vaccinated to “play it safe” and wear a mask because so many remain unvaccinated globally and the variant has become the main spreader in several countries, CNBC reported.

Australia, New Zealand, Bangladesh, Portugal and Israel have all been forced to return to some form of lockdown because of the variant, which originated in India, according to Voice of America.

It’s not clear yet whether the variant makes people sicker since more data needs to be collected, said Dr. Jacob John, who studies viruses at the Christian Medical College at Vellore in southern India.