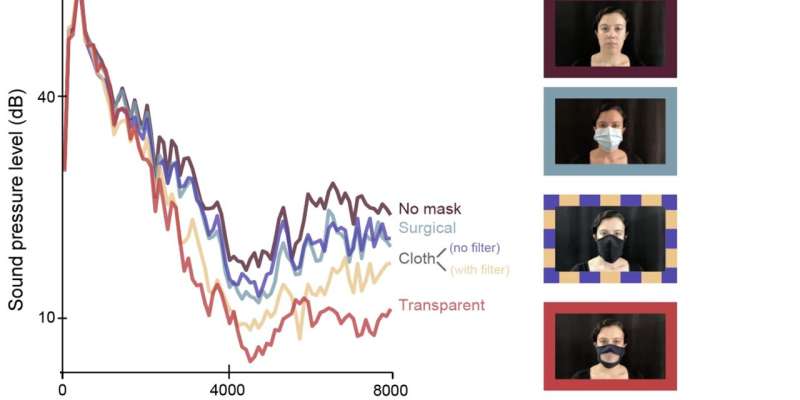 To assess how different styles of face masks affected speech intelligibility in normal hearing listeners, researchers from Washington University in St. Louis put some of the most popular mask designs to the test.

Their research was published in the journal Cognitive Research: Principles and Implications.

The team, from the labs of Kristin Van Engen, assistant professor of psychological and brain sciences and of linguistics in Arts & Sciences, and Jonathan E. Peelle, associate professor of otolaryngology at the School of Medicine, found that cotton masks with filter inserts and masks with a transparent plastic panel were linked to/associated with the worst performance when it came to understanding what the wearer was saying.

While they were surprised that listeners did not do better with transparent masks, the authors pointed out that the clear panels hurt the audibility of the speech signal more than other mask materials and that the panels often fog up, making it difficult to see the talker’s mouth.

The researchers weren’t simply interested in showing that face masks affect speech intelligibility. “We already know it’s harder to understand speech when you’re wearing a mask,” that’s pretty self-evident, Van Engen said. “We’re exploring the extent to which different masks affect one’s ability to understand speech in background noise—both in terms of how many words you can recognize and in terms of how difficult the task feels.”

A group of 260 participants with self-reported normal hearing—a younger group (18- to 35-year-olds) and an older group (59- to 77-year-olds)—listened to Brown speak 150 sentences in background noise. Each time, they were tasked with trying to type the sentence they heard.

Participants wrote down what they thought they heard and how hard it was for them to make out the words or, as Brown put it, “how hard people had to squint their ears.”

Unsurprisingly, young adults did a better job of understanding Brown’s speech and reported taking less effort to do so. The difference was not large, however. In fact, it was smaller than researchers expected. For both groups, when there was no background noise, they could pretty much make out everything Brown said, no matter what was covering her face.

Once a bit of background noise was added, however, the masks started to make a difference. And, when the loudest noise was added, the differences became even clearer. When Brown spoke while wearing a surgical mask, participants could still make out over 50% of what she was saying. But when she donned the cloth mask with a filter or the transparent mask, accuracy dropped to about 30%.

“We were surprised by how hard the transparent masks were,” Brown said. “It’s not surprising that the acoustics were worse”—because of the plastic panel—”but because there’s visual information, we thought it wouldn’t be so bad. Whatever visual information you get apparently does not overcome the fact that it’s hurting the auditory signal more.”

The transparent masks, however, might work better for some than for others.

“For listeners with normal hearing, they don’t necessarily confer the benefits that might have been expected,” Van Engen said. “But our findings do not speak to their effects on individuals with significant hearing loss/deafness. It is possible that they would be beneficial for those individuals.”

Mask or no mask, noise also increased the effort it took for people to understand what they were hearing. That kind of listening effort can have effects beyond just how well a person understands what they are hearing. It’s just plain tiring, something researchers knew, but others may not have grasped.

“It’s nice to demonstrate that yes, you can maintain intelligibility quite well, and at the same time, be working quite hard to do it,” Van Engen said.