New data from the ZOE COVID Study has revealed that lower-back pain is one of the eight telltale symptoms of the Omicron variant of coronavirus. 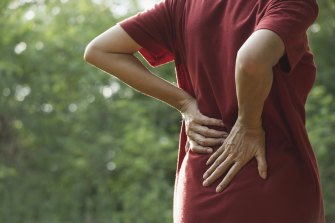 Approximately one in six people in Australia have back pain.Credit:iStock

“It’s not that surprising that you should get muscle pains with a COVID infection,” says Professor Martin Underwood, a British back pain researcher from Warwick Medical School. “Because it’s related to other viral infections and we know that with cold and flu you will often get muscle pains.”

Yet back pain is not just limited to COVID: approximately one in six people (16 per cent) in Australia have back pain and it’s estimated that 70-90 per cent of people can expect to have lower back pain at some time in their life, according to the Australian Institute of Health and Welfare.

Aches and pains in your back could be telling you that you have the virus, particularly if they are accompanied by other typical cold-like symptoms, such as a scratchy throat, but what else might back pain be telling you? Here’s everything you need to know.

If you have lower back pain…

“The vast majority of back pain is non-specific and it is called that because we don’t know what causes it,” says Underwood. “It could be coming from a disc, a muscle or from tendons. You will have pulled or twisted something in there that’s causing the pain. In any event, it doesn’t matter because in most cases of new-onset back pain it gets better regardless of what we do or don’t do. However, a small minority develop chronic pain and disability and that can be miserable and can make people’s life really bad.”

The advice is to keep moving and take painkillers. “Nurofen (ibuprofen) is your best choice, paracetamol is ineffective,” explains Underwood.

“Exercise will also help. It probably doesn’t matter which type you do,” he adds. “It’s about keeping mobile because if you rest your back and stop moving, then inevitably, it weakens it and you’re going to have more problems.”

If your weight has been creeping up….

In the UK, the public has been urged to lose weight to ease back pain and joint pain as part of a new Government public health drive. The campaign will highlight six serious health conditions that can be improved by losing weight, with back pain being one of them.

Pain Australia states that obesity is a risk factor for musculoskeletal system disorders such as low back pain, osteoarthritis and neck pain. This is thought to be because of the mechanical load of excessive body weight and the resulting degeneration and inflammation of the system.

So if your weight has crept in recent years your back pain could be telling you that it’s time to lose a few kilograms.

If your pain is worse working from home…

The shift to home working has been bad news for backs. Without the daily commute, we’re moving less and our home office set up can be far from back-friendly.

Osteopath Boniface Verney Carron, co-founder of the preventive health platform Oona Series, says that back pain is often down to postural issues and that most of us need to adjust our screen height, especially if we are working from a laptop.

“If you are constantly looking down at a screen, that C-shape in your spine puts pressure on the discs,” says Verney Carron. “Make sure you’re putting enough books under your computer so that the centre of the screen is at the level of your eyes. It’s probably more than you think.”

He also suggests creating a backrest with a rolled-up towel tucked between the chair and lower back to support the lower spine.

If your pain is triggered by bending and lifting…

You might have ruptured a disc. This is when a fragment of the jelly-like centre of the vertebra pushes out through the rubbery exterior.

So how can we deal with a disc issue? “It’s best to avoid sitting, bending and lifting. Typically when this first happens, the disc is very good at telling you what to avoid,” says physiotherapist Adam Brown, co-founder of Cornerstone Physiotherapy. “But then as the inflammation and pain resolve it’s important to restore full mobility in the spine in all directions. Then you will be more resilient.

“In a textbook case – of a herniated disc – you might find a person doesn’t fully stand up straight due to pinching in the back. Most people don’t fully restore movement and the next time they’re lifting or shovelling snow, they just re-herniate.”

Brown recommends gently restoring range of motion with repetitive stretches, but don’t push so hard that you re-stimulate the inflammatory response. “It takes a little bit of time; you need a measured approach,” he says. “Each person is different and it’s not a bad idea to involve a physio, but if you were to Google the cat/cow exercise, that’s one way to do it.”

If you have an achy lower back that’s triggered by long periods of standing or walking and relieved by sitting, you might need to work on your core strength.

“It could be that your muscular system isn’t supporting your spine as well as it could and you are putting pressure on your joints,” says Brown. “You often see it when people are hypermobile. They are standing at the end of the range of the extension, which can lead to lower back ache.”

Tight hip flexors – the muscles which attach the pelvis to the thigh bone – can add to the problem by increasing the curvature of the lower spine and upper back, leading to lower back and hip pain.

“These people require a strength training approach,” says Brown. “You need to work on core strength and hip mobility.”

“This could be neurogenic claudication,” says Brown.

“It takes eight to 10 minutes of walking – you could almost set a clock by it – then they’ll start to get some symptoms. It might be pain and might be tingling and numbness that spreads out from the buttocks, or weakness in the legs. Then sitting will relieve those symptoms.”

Pain that starts in your back that radiates down your leg is known as sciatica. “Typically you feel it in the foot and this is coming from irritation of the nerve roots when they come out of the back,” explains Prof Underwood. “It’s not always clear what causes it. But there is a proportion that is caused by a bit of weakness in the disc, where it bulges or protrudes, it can press on the nerve root.

“Keep moving within the limits of the pain and take painkillers. Anti-inflammatory drugs, like ibuprofen to reduce the inflammation around the nerves, are probably your best choice.”

The vast majority of us will get better within a few weeks, but if the pain continues surgery may help. “If an MRI scan shows a disc pressing on the nerve on the same nerve root, you may need surgery to remove where the disc is pressing,” he says.

If you have frozen shoulder or shoulder pain…

“With a frozen shoulder, we call it adhesive capsulitis,” says Underwood. “We don’t know what causes it.” One theory suggests that there may be an autoimmune component to the process, where the body attacks healthy tissue spiralling into a growing inflammatory response.

“It is characterised by pain and stiffness in the shoulder, but it’s difficult to tell it apart from problems with the rotator cuff or with the ligaments that move the shoulder. Either way, the treatment is the same and it usually gets better whatever you do.”

Advice for a frozen shoulder? “It’s back to ibuprofen and keep moving,” says Underwood. “Some doctors recommend a steroid injection into the joint. But they probably only have a short-term effect.”

If you have osteoporosis…

The pain might be caused by a compression fracture, particularly in women who are 75 or older. “The internal structure of vertebra loses density and can collapse on itself,” says Brown. “Typically it’s acute pain when it happens but it resolves over a few weeks. People just need to keep moving and working with a physio.”

If you have osteoporosis your GP can prescribe drugs that reduce further bone loss or parathyroid hormone treatment that stimulates new bone. However, parathyroid treatments are only used in a small number of people for whom other treatments aren’t working. It’s also important to make sure you’re getting enough calcium and vitamin D.