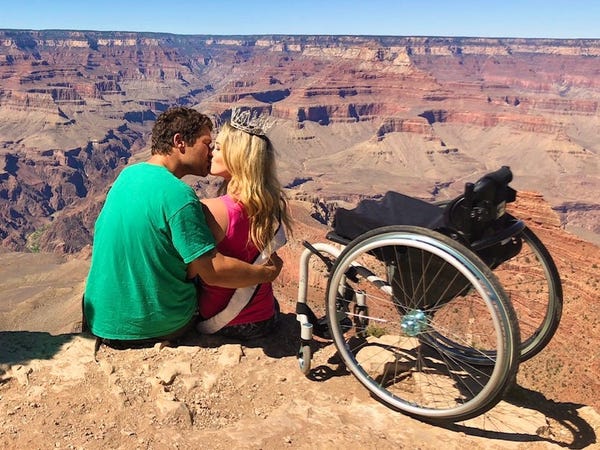 After winning Miss Wheelchair USA, Madeline Delp was excited to go on a two-month-long speaking tour and bring her new boyfriend of five months along for the ride.

But two weeks into the cross-country trip, Delp, who has been paralyzed from the waist down since she experienced a car crash at age 10, became concerned about the fact that she hadn't pooped for 14 days.

Past dating experiences made Delp anxious about disclosing her health troubles to her boyfriend, but she couldn't wait any longer.

"I broke down and told him, I was like, 'Hey babe, this is really awkward, but I haven't pooped in two weeks, and I'm afraid it's not natural or normal.' So he immediately went to the store and he got every laxative he could find," Delp told Insider.

At first, the laxatives didn't seem to work. But then, when Delp and her boyfriend were traveling through Yellowstone, with no bathroom in sight, she really had to go.

"We're in the middle of the woods with buffalo around us, with no options other than he carry me out in the middle of a field for me to do my business," Delp said. And that's exactly what he did.

According to Delp, that experienced solidified her relationship with her boyfriend, a friend from childhood who saw her for more than her disability, but was also compassionate when she needed help.

They've been together for three years now, Delp told Insider, but before then igniting romance was a difficult experienced riddled with awkward disclosures, rude comments, and bewildered dates.

Delp used dating apps for about a year before getting together with her boyfriend.

At first, she only put pictures of her face on her profile and didn't mention her wheelchair. But after one date looked like a "deer in headlights" when seeing Delp in her wheelchair for the first time, she decided to take a different approach.

"I'll never forget that feeling of being like, 'Oh my gosh, this is something that is actually a big deal to some people.' I know I took him off guard a little bit, but it was kind of demoralizing, and dehumanizing in a way just because I felt so different," Delp said. "After that I was like, 'OK, we're going to be completely upfront.'"

Delp added a picture of herself in her wheelchair, plus a short story about why she used it, in her dating-app profile, but that didn't put an end to the awkward encounters.

On first dates, "automatically it's awkward because usually they're picking me up [at my house] and have to break apart my wheelchair," Delp said. "So I'd be having to instruct them how to take off the wheels and how to put the wheelchair in their car. And then I get in their car, unless they had a truck, in which case they had to pick me up."

Once in the car, Delp's dates would typically take her to a restaurant, which posed another obstacle: bathroom access.

If a date chose a restaurant that didn't have big enough bathrooms to accommodate Delp's wheelchair, she had to ask her date to help her get to the facilities, or skip them altogether.

Since Delp also has incontinence due to her condition, and has peed herself while out on a date because she couldn't get to a bathroom in time.

For that reason, she now comes prepared with an extra change of clothes.

Answering rude questions about sex and being compared to other women

In many cases, Delp would be other singles' first date with someone who used a wheelchair to get around. That meant Delp would often have to field inappropriate questions and comments.

According to Delp, first dates and dating app matches have asked her if she's able to have sex (she can, for the record). Other times, men told her, "Wow, you're pretty for a girl who's in a wheelchair."

"Honestly, I've had a lot of insecurity that crept in over the years, knowing that something completely out of my control affects the way that people see me, the way guys see me. Now I almost see it as a little blessing in disguise because it weeds out the bad ones in a way," Delp said.

'I'd rather people just be upfront'

But for Delp, the worst dates occurred when they saw her wheelchair, and went silent out of fear.

"You know when it's an issue because they clam up and they don't know what to say and they get awkward and they get silent. And then I'm the one trying to carry the conversation, knowing that the wheelchair is a problem the whole time," she said.

In reflecting on her year of awkward and sometimes demeaning dates, Delp said wished more singles took a kind and curious approach to her condition.

"I think the hardest thing for me is when people just tiptoe around it and they act awkward. I'd rather people just be upfront and ask me, 'What can I do to make this easiest for you? Should I call first to ask if a restaurant is accessible? Would you rather take my car?' because all disabilities are different," Delp said.

"When you open that door, you open intimacy and you open a sense of trust to be able to share that experience with somebody."