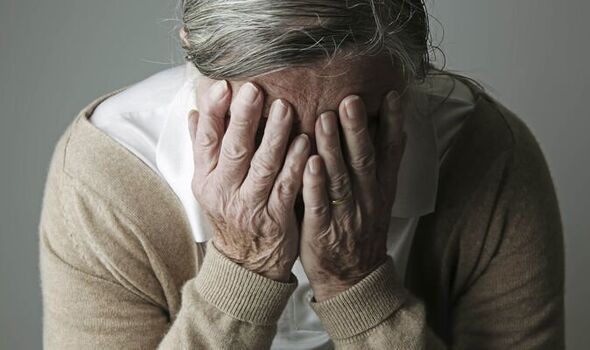 The 2019 Conservative manifesto included a bold pledge to double funding to £160million per year for 10 years and speed up drug trials to help find a cure. But more than two years after the policy was announced by then health secretary Matt Hancock in an interview with the Daily Express, the cash injection – dubbed the “Dementia Moonshot” – has not materialised.

In fact government spending on dementia research has fallen at a time when scientists have been dealt a serious blow by the pandemic, prompting fears progress will halt and the field will suffer an exodus of young researchers.

The campaign is backed by ARUK and Alzheimer’s Society.

Dr Richard Oakley, research head at Alzheimer’s Society, said: “Every year that passes without this financial backing, we fail to unlock the potential to find treatments for dementia. The Government isn’t sticking to its promise.”

ARUK ambassador Scott Mitchell – husband of the late actress Dame Barbara Windsor who was diagnosed with Alzheimer’s in 2014 – is due to speak at the conference.

He said: “Dementia research is a priority… but this is an issue that needs to be on the Government’s agenda, too.”

There have been no new treatments for Alzheimer’s approved in this country for two decades. Current treatments can temporarily stabilise symptoms but do not tackle the underlying disease itself.

However, experts believe transformative discoveries are finally within sight.

Sam Benham-Hermetz at ARUK said there were about 125 new drugs in clinical trials, with 28 of those in phase three. She said: “We want to see more people with dementia in the UK enrolled so they can access those experimental new treatments.”

A national dementia strategy is due to be published later this year – but it will fall at the first hurdle if researchers are not given certainty about the future of their work. We are urging the Government to renew its commitment to the Dementia Moonshot – with details of when and how the cash will become available.

It is an exciting time for dementia research. There are promising new treatments for Alzheimer’s on the horizon and there is hope that new discoveries into how dementia develops will unlock many more.

But we keep coming up against a hurdle – we diagnose Alzheimer’s disease and other types of dementia too late. Therefore we don’t give treatments when they’ll be most effective.

That’s why Alzheimer’s Society is working with top researchers like Dr Riccardo Marioni at the University of Edinburgh to identify “red flags” in blood and spot dementia earlier.

People can also take part in more targeted research earlier, giving a better chance for these studies to work.

These treatments could be available within five years, and we need to be ready for them. Otherwise we risk failing to give these drugs to people when they will help most.

Research will improve care, find ways to diagnose people earlier and will one day find a cure – but we need crucial funding.

The Government must deliver on its Dementia Moonshot promise to give hope for the 900,000 suffering dementia in the UK and their loved ones.

Dr Daniel Erskine’s dementia research at Newcastle University was delayed by a year due to the pandemic.

And the 36-year-old Alzheimer’s Research UK fellow said: “Months are quite a long time in science.”

Dr Erskine focuses on Lewy body dementia, which is caused by clumps of protein in brain cells. He said: “Lockdown meant I wasn’t able to go into work.”

Now he is working weekends and nights to catch up, and luckily he has been granted an extension on his funding.

But he is concerned at the numbers of researchers leaving the field due to short-term contracts. He said: “That’s a huge problem because every single person that leaves takes with them years of experience.”

Dr Erskine said dementia was “one of the greatest challenges of our times” and there was too little investment in research.

“I always think back to 1906 when Alois Alzheimer first told the world about what is now called Alzheimer’s disease and his patient Auguste Deter.

“It’s depressing that today there’s not that much more that could be done.”

Lockdown was tipping point for gran

The 84-year-old’s busy social routine ground to a halt when the nation was ordered to stay at home in March 2020.

She lived alone at the time and started experiencing distressing episodes of confusion, wandering the streets at night, calling 999 and having hallucinations.

Granddaughter India, 26, explained: “She was worried about my grandad Brian, who died 20 years ago, thinking that he was still there.”

The family arranged for carers to visit three times a day and alarms were fitted to alert them if she left the house at night.

Tests in late 2020 revealed she had Lewy body dementia, associated with abnormal deposits of a protein in the brain, and she moved into a care home. She is now more settled and able to socialise with other residents.

India, from Sunderland, added: “It’s weird to see her in a care home when two years ago she was so independent. I think the pandemic accentuated her symptoms.”