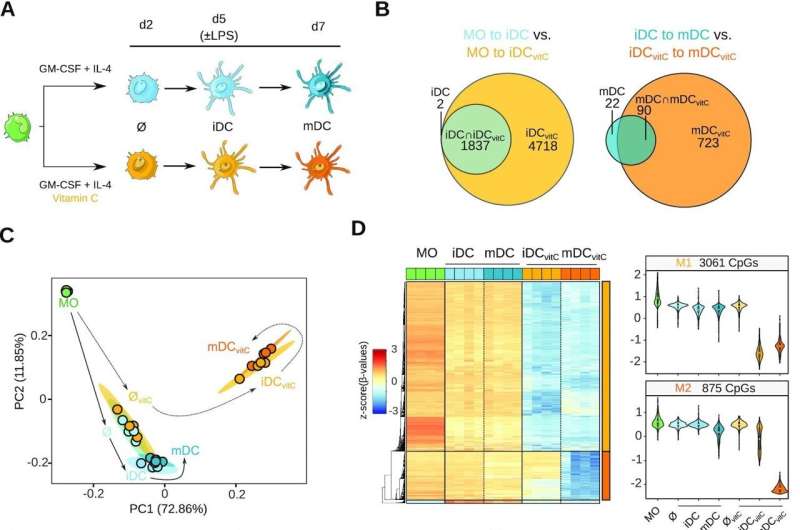 Researchers from the Epigenetics and Immune Disease Lab at the Josep Carreras Leukaemia Research Institute have recently shown that vitamin C improves the immunogenic properties of dendritic cells in vitro.

The team’s results, recently published in Nucleic Acids Research, show that treating the cells with vitamin C leads to a more consistent activation of genes involved in the immune response, mainly through DNA demethylation, a kind of epigenetic reprogramming. This discovery may be useful for generating more potent dendritic cell-based therapies in the future.

Since the onset of anticancer cell therapies, which use living cells to find and eliminate tumors, many types of immune cells have been used. The best-known cell therapies use lymphocytes, as in highly successful CAR-T therapies.

Recently, dendritic cells have attracted scientists’ attention, due to their ability to uptake and present antigens (small parts of a pathogen or a cancer cell) to T-lymphocytes and induce an antigen-specific potent immune activation. In this regard, loading dendritic cells with specific antigens to create immune memory constitutes so-called DC vaccines.

To study dendritic cells in the lab, researchers differentiate them from monocytes (also an immune cell) using a particular type of molecular signaling. This differentiation is accomplished through a complex set of gene activation processes in the nucleus, mostly due to the activity of the chromatin remodeling machinery spearheaded by the TET family of demethylases, proteins that act upon the DNA epigenetic marks.

Vitamin C was known to interact with several TET proteins to enhance its activity, but the specific mechanism was still poorly understood in human cells. In the Nucleic Acids Research study, a team lead by Dr. Esteban Ballestar hypothesized that treating monocytes in vitro during the dendritic cell differentiation process would help the resulting cells be more mature and active.

The results obtained by Octavio Morante-Palacios, first author of the publication, José Luis Sardina (also from the Josep Carreras Leukaemia Research Institute) and Eva Martínez-Cáceres, Head of Immunology of the Germans Trias i Pujol Research Institute, show that vitamin C treatment triggers an extensive demethylation at NF- kB/p65 binding sites compared with non-treated cells, promoting the activity of genes involved in antigen presentation and immune response activation. Vitamin C also increases the communication of the resulting dendritic cells with other components of the immune system and stimulates the proliferation of antigen-specific T cells.

Overall, these new findings support the hypothesis that treating monocyte-derived dendritic cells with vitamin C may help generate DC vaccines with higher performance. After consolidating these results in preclinical models, and hopefully in clinical trials, a new generation of cell therapies based on dendritic cells could be used in the clinic to fight cancer more efficiently.