Vitamin B12 is a nutrient that helps keep the body’s nerve and blood cells healthy and helps make DNA – the genetic material in all cells. As the National Institutes of Health (NIH) explains, vitamin B12 also helps prevent a type of anaemia called megaloblastic anemia that makes people tired and weak. Due to the vital role vitamin B12 plays in the body, becoming deficient in the nutrient can impact the body in a number of insidious ways.

There are several warning signs associated with the mouth, and the most conspicuous signs can be seen on your tongue.

You may experience an inflamed tongue, which tends to change colour and shape, and may become painful, red and swollen.

The inflammation can also make your tongue look smooth, as all the tiny bumps on your tongue that contain your taste buds stretch out and disappear.

In addition, an inflamed tongue can change the way you eat and speak. 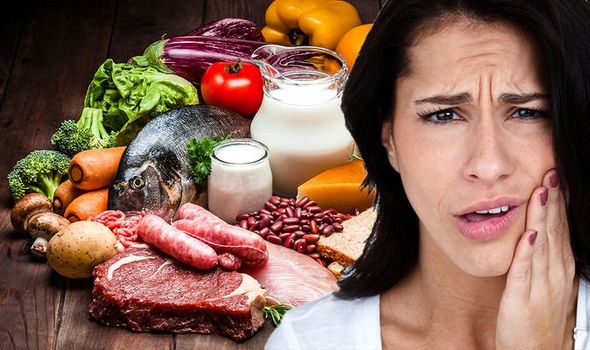 Furthermore, studies have shown that a swollen and inflamed tongue that has long straight lesions on it could be an early sign of vitamin B12 deficiency.

Research has also shown that a vitamin B12 deficiency can trigger a number of other oral symptoms, such as mouth ulcers, feelings of pins and needles in the tongue or a burning and itching sensation in the mouth.

Other symptoms of a vitamin B12 deficiency include:

“Some of these symptoms can also happen in people who have a vitamin B12 deficiency but have not developed anaemia,” explained the NHS.

DON’T MISS
Norovirus warning: The drink that could give you the highly-contagious winter vomiting bug [INSIGHT]
How to live longer: This type of exercise found to be best for increasing life expectancy [TIPS]
Lung cancer symptoms: Three major clues in a person’s hands that could signal the disease INSIGHT]

It is imperative to see a GP if you’re experiencing symptoms of vitamin B12 deficiency.

As the NHS points out, these conditions can often be diagnosed based on your symptoms and the results of a blood test.

It is also important to get any symptoms checked as soon possible because problems caused by the condition can be irreversible if left untreated.

“The longer the condition goes untreated, the higher the chance of permanent damage,” warned the NHS.

How to replenish vitamin B12

The treatment for vitamin B12 depends on the underlying cause but most people can be easily treated with injections or tablets to replace the missing vitamins.

Vitamin B12 deficiency anaemia is usually treated with injections of vitamin B12 over the course of a number of weeks.

There are two types of vitamin B12 injections:

Vitamin B12 is found naturally in a wide variety of animal foods and is added to some fortified foods. Plant foods have no vitamin B12 unless they are fortified.

Vitamin B12 can be found in the following foods:

Vitamin B12 can also be taken in supplement form, which is usually recommended if the underlying cause is due to your diet.

People who find it difficult to get enough vitamin B12 in their diets, such as those following a vegan diet, may need vitamin B12 tablets for life.

Although it’s less common, people with vitamin B12 deficiency caused by a prolonged poor diet may be advised to stop taking the tablets once their vitamin B12 levels have returned to normal and their diet has improved, explained the NHS.