A Virginia woman has filed a lawsuit against the makers of heartburn medication Zantac, claiming the drug caused her esophageal cancer.

In the complaint, filed in the US District Court for the District of New Jersey, Deborah Haskins, of Ridgeway, alleges that Zantac’s active ingredient, ranitidine, formed unsafe levels of a known human carcinogen in her body.

Haskins asserts that ranitidine’s chemical structure is ‘inherently unstable’ and can break down during digestion and produce the cancer-causing agent NDMA.

In past studies conducted on animals, NDMA has been linked to several cancers including those of the colon and rectum, kidneys, liver and stomach.

She is suing on the grounds that Zantac has a design defect, that the maker failed to warn consumers of the risks and committed fraud by doing so, and of battery for causing her injuries.

It comes on the heels of Zantac and generic forms of the medications being recalled following tests that found high level of NDMA in the tablets. 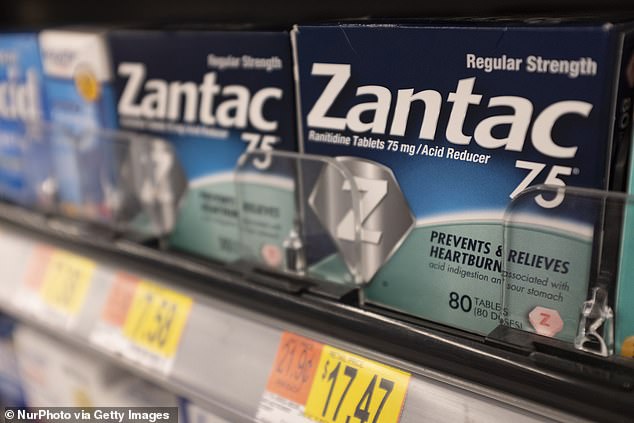 Deborah Haskins, of Ridgeway, Virginia, filed a lawsuit against the makers of Zantac (pictured), claiming the active ingredient produced a known human carcinogen and led to her esophageal cancer

The lawsuit names Zantac’s current manufacturer for the US, Sanofi, as defendant, as well as past makers Boehringer Ingelheim Pharmaceuticals and GlaxoSmithKline.

According to the complaint, Haskins began using Zantac in 2005, taking at least one tablet of 75mg per day.

She claims that, as a result, she developed esophageal cancer, but it’s unclear when she was diagnosed.

Esophageal cancer begins in the cells of the tube that connects the throat to the stomach.

Research has not explicitly linked Zantac to the cancer, but the esophagus is acted upon by the drug.

Treatment can range from immunotherapy to radiation to chemotherapy. If the cancer is in an advanced stage, surgery may be necessary to remove some or most of the esophagus.

An estimated 17,650 new cases of esophageal cancer were diagnosed in 2019 and 16,080 people died, according to that National Cancer Institute.

Only about 20 percent of patients survive five years.

In the lawsuit, Haskins says that if she had known about the unsafe levels of NDMA in Zantac, she would have never purchased the medication.

She is seeking an undisclosed amount for damages, including medical expenses, lost wages, and ‘loss of enjoyment of life.’

Zantac is in a class of drugs known as histamine-2 blockers, and works by lowering the amount of acid the stomach produces.

It has been on the market since 1986 and, last year, was named the world’s best-selling drug.

But, in September 2019, the US Food and Drug Administration (FDA) announced it had found traces of NDMA – the short-hand for N-nitrosodimethylamine – in tests of Zantac higher than what is determined to be safe for human exposure.

The FDA’s recommended daily intake limit is 96 nanograms (ng). An independent pharmacy reported that it detected NDMA ‘in excess of 3,000,000 ng per tablet.’

After unsafe levels of NDMA were found in generic versions of the drug, several companies began recalling their products.

Multiple pharmacy chains also announced they would be suspending sales of Zantac due to the troubling findings.

It was a big blow to Zantac, which is the fourth leading antacid tablet in the US, was worth an estimated $128.9 million in 2018.

Haskins’s lawsuit is among dozens across the US claiming that the drug caused several different types of cancer including stomach cancer, liver cancer, colorectal cancer and kidney cancer.

Attorneys representing Haskins were not immediately available for comment.

Disclosure: This reporter’s father is an attorney at a firm representing plaintiffs in a separate lawsuit filed against the makers of Zantac. The firm has no involvement in Haskins’s case.