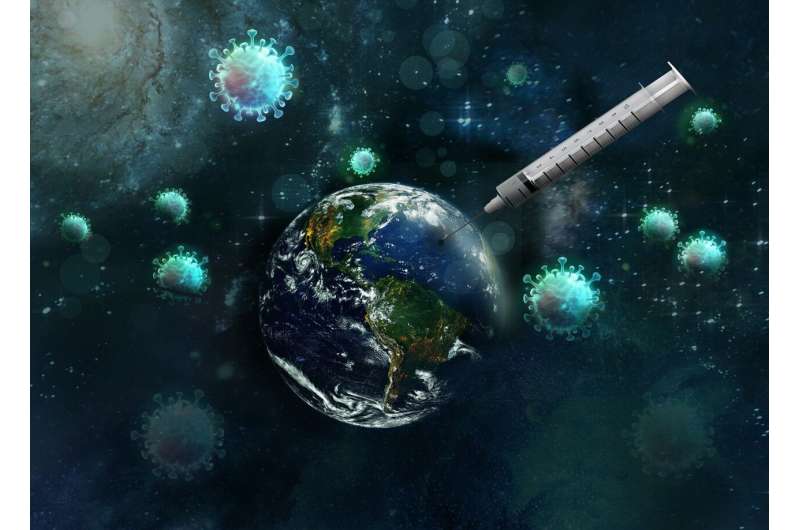 A model of COVID-19 dynamics in South Africa reveals epidemiological characteristics of the main SARS-CoV-2 variants of concern and highlights their potential to cause further outbreaks. Published in eLife, the researchers’ findings highlight the need for more proactive planning and preparedness for future variants of concern (VOCs), including the development of a universal vaccine that can block SARS-CoV-2 infection as well as prevent severe disease.

As with many places, by February 2022, South Africa had experienced four distinct pandemic waves caused by the original (or ancestral) SARS-CoV-2 virus and three VOCs—beta, delta and omicron.

“These repeated pandemic waves have been driven by new VOCs that erode prior immunity from either infection or vaccination, increase transmissibility, or a combination of both,” explains study author Wan Yang, Assistant Professor of Epidemiology at Columbia University Mailman School of Public Health, New York, U.S. “Although laboratory and field studies provide insights into variant epidemiological characteristics, quantifying the extent of immune erosion and changes to transmissibility for each VOC is challenging.”

To better understand the characteristics of the different COVID-19 VOCs, the team developed a mathematical model using weekly case and death data from nine South African provinces, from March 2020 to end of February 2022, to reconstruct SARS-CoV-2 transmission dynamics.

They validated their model using three independent datasets and found that estimated cumulative infection rates roughly matched serology data over time, and the estimated number of infections matched with the number of hospitalizations for all four pandemic waves caused by the ancestral, beta, delta and omicron variants. Modeled infection numbers also matched with death rates from the ancestral, beta and delta waves, but less so for omicron, because by this stage prior infection and vaccinations reduced the number of infected people suffering from deadly outcomes.

Having validated their model, they then used it to estimate epidemiological characteristics for each VOC, including infection-detection rates, infection-fatality rates, population susceptibility and transmissibility, and compared these dynamics across provinces. These “model inference estimates” were then used to quantify the immune erosion and increase in transmissibility for each VOC.

They found that the beta variant eroded immunity among roughly 65% of people previously infected with ancestral SARS-CoV-2 and was 35% more transmissible than the original virus. This finding was supported by the experience of previously infected participants in one of the vaccine trials, who had a similar susceptibility to the beta variant as those who had no prior infection.

Estimates for delta varied between provinces, but overall the variant eroded immunity from prior infection or vaccination by roughly 25% and was 50% more transmissible. This aligns with a reported 27.5% reinfection rate seen during the delta wave in Delhi, India.

Finally, for omicron, estimates varied but consistently highlighted its known higher transmissibility than previous VOCs. The authors estimated that omicron was roughly 95% more transmissible than ancestral SARS-CoV-2 and eroded immunity by 55% (prior infections and vaccinations).

These results illustrate that high prior immunity to SARS-CoV-2 does not preclude new COVID-19 outbreaks, as neither prior infection nor current vaccination completely block infection from a new variant.

Multiple SARS-CoV-2 variants of concern and interest have emerged in the two years since the pandemic began, and it is challenging to predict the frequency and direction of future viral mutation, especially the levels of immune erosion, changes in transmissibility and innate disease severity, say Yang and co-author Jeffrey Shaman, Professor and Director of the Climate and Health Program at Columbia University Mailman School of Public Health.