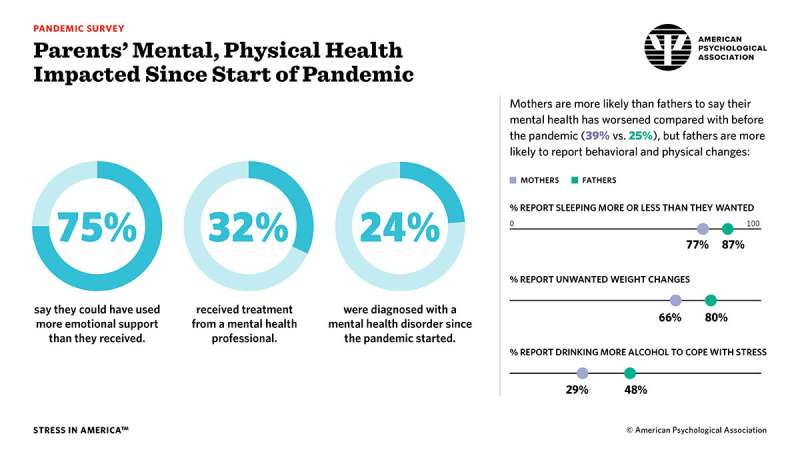 As growing vaccine demand signals a potential turning point in the global COVID-19 pandemic, the nation’s health crisis is far from over. One year after the World Health Organization declared COVID-19 a global pandemic, many adults report undesired changes to their weight, increased drinking and other negative behavior changes that may be related to an inability to cope with prolonged stress, according to the American Psychological Association’s latest Stress in America poll.

APA’s survey of U.S. adults, conducted in late February 2021 by The Harris Poll, shows that a majority of adults (61%) experienced undesired weight changes—weight gain or loss—since the pandemic started, with 42% reporting they gained more weight than they intended. Of those, they gained an average of 29 pounds (the median amount gained was 15 pounds) and 10% said they gained more than 50 pounds, the poll found. Such changes come with significant health risks, including higher vulnerability to serious illness from the coronavirus. For the 18% of Americans who said they lost more weight than they wanted to, the average amount of weight lost was 26 pounds (the median amount lost was 12 pounds). Adults also reported unwanted changes in sleep and increased alcohol consumption. Two in 3 (67%) said they have been sleeping more or less than desired since the pandemic started. Nearly 1 in 4 adults (23%) reported drinking more alcohol to cope with their stress.

“We’ve been concerned throughout this pandemic about the level of prolonged stress, exacerbated by the grief, trauma and isolation that Americans are experiencing. This survey reveals a secondary crisis that is likely to have persistent, serious mental and physical health consequences for years to come,” said Arthur C. Evans Jr., Ph.D., APA’s chief executive officer. “Health and policy leaders must come together quickly to provide additional behavioral health supports as part of any national recovery plan.”

The pandemic has taken a particularly heavy toll on parents of children under 18. While slightly more than 3 in 10 adults (31%) reported their mental health has worsened compared with before the pandemic, nearly half of mothers who still have children home for remote learning (47%) reported their mental health has worsened; 30% of fathers who still have children home said the same. Parents were more likely than those without children to have received treatment from a mental health professional (32% vs. 12%) and to have been diagnosed with a mental health disorder since the coronavirus pandemic began (24% vs. 9%). More than half of fathers (55%) reported gaining more weight than they wanted to, and nearly half (48%) said they have been drinking more alcohol to cope with stress. 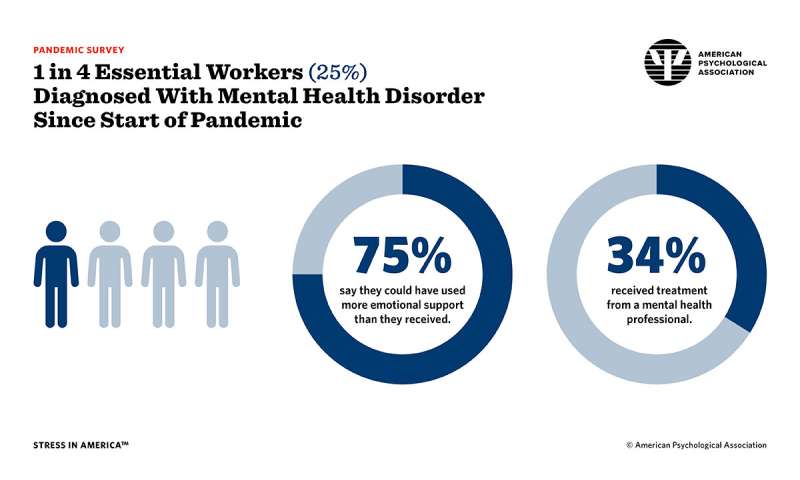 The majority of essential workers (54%), such as health care workers and people who work in law enforcement, said they have relied on a lot of unhealthy habits to get them through the pandemic. Nearly 3 in 10 (29%) said their mental health has worsened, while 3 in 4 (75%) said they could have used more emotional support than they received since the pandemic began. Essential workers were more than twice as likely as adults who are not essential workers to have received treatment from a mental health professional (34% vs. 12%) and to have been diagnosed with a mental health disorder since the coronavirus pandemic started (25% vs. 9%).

Further, people of color reported unintended physical changes during the pandemic. Hispanic adults were most likely to report undesired changes to sleep (78% Hispanic vs. 76% Black, 63% white and 61% Asian), physical activity levels (87% Hispanic vs. 84% Black, 81% Asian and 79% white) and weight (71% Hispanic vs. 64% Black, 58% white and 54% Asian) since the pandemic began. Black Americans were most likely to report feelings of concern about the future. More than half said they do not feel comfortable going back to living life like they used to before the pandemic (54% Black vs. 48% Hispanic, 45% Asian and 44% white) and that they feel uneasy about adjusting to in-person interaction once the pandemic ends (57% Black vs. 51% Asian, 50% Hispanic and 47% white).

“It’s clear that the pandemic is continuing to have a disproportionate effect on certain groups,” said APA President Jennifer Kelly, Ph.D. “We must do more to support communities of color, essential workers and parents as they continue to cope with the demands of the pandemic and start to show the physical consequences of prolonged stress.”

Overall, Americans are hesitant about the future, regardless of vaccination status. Nearly half of adults (49%) said they feel uneasy about adjusting to in-person interaction once the pandemic ends. Adults who received a COVID-19 vaccine were just as likely as those who had not received a vaccine to say this (48% vs. 49%, respectively). 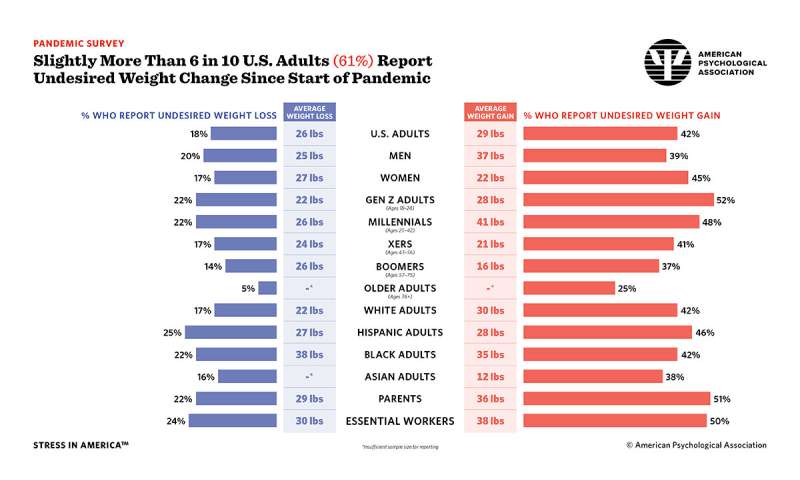 This Stress in America survey was conducted online within the United States by The Harris Poll on behalf of the American Psychological Association between Feb. 19 and 24, 2021, among 3,013 adults age 18+ who reside in the U.S. Interviews were conducted in English and Spanish. Data were weighted to reflect their proportions in the population based on the 2020 Current Population Survey (CPS) by the U.S. Census Bureau. Weighting variables included age by gender, race/ethnicity, education, region, household income and time spent online. Hispanic adults were also weighted for acculturation, taking into account respondents’ household language as well as their ability to read and speak in English and Spanish. Country of origin (U.S./non-U.S.) was also included for Hispanic and Asian subgroups. Weighting variables for Gen Z adults (ages 18 to 24) included education, age by gender, race/ethnicity, region, household income, and size of household, based on the 2019 CPS. Propensity score weighting was used to adjust for respondents’ propensity to be online.