Measles surged around the world last year and experts have warned it is a ‘wake-up call’ for more people to vaccinate their children.

Children in the future could face ‘disastrous’ health problems if the deadly infection is allowed to spiral out of control.

The number of people who caught measles last rose by 50 per cent worldwide, UNICEF has revealed, with 98 countries reporting an increase.

Some 136,000 people died of the infection, which is more contagious than Ebola, despite there being an extremely effective and cheap vaccine.

Growing numbers of people dangerously refusing to vaccinate their children – anti-vaxxers – are one of the main reasons for the illness spreading. 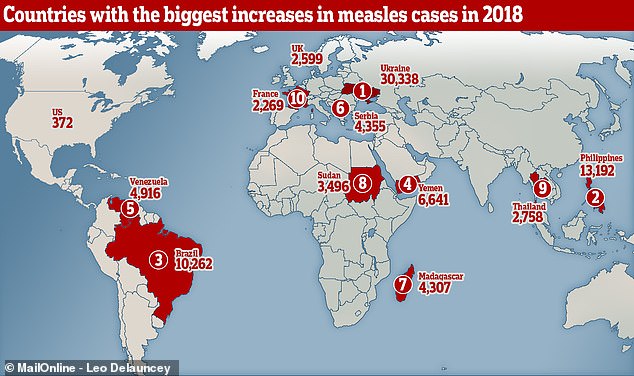 UNICEF – the United Nations’s children’s agency – has issued a warning that ‘complacency’ is leading to the rise.

Ukraine, the Philippines and Brazil suffered the biggest increases in measles cases.

The other countries with the biggest increases were Yemen, Venezuela, Serbia, Madagascar, Sudan, Thailand and France.

‘This is a wake-up call,’ said Henrietta Fore, executive director of UNICEF.

‘We have a safe, effective and inexpensive vaccine against a highly contagious disease — a vaccine that saved almost a million lives every year over the last two decades.

‘Just as the serious outbreaks we are seeing today took hold in 2018, lack of action today will have disastrous consequences for children tomorrow.’

Measles, which is most deadly for children, begins as a blotchy rash and fever and usually only lasts for a week or two, but it can be fatal.

If untreated the virus can lead to life-threatening complications such as hepatitis, meningitis, nerve damage or brain swelling.

The number of children having MMR vaccinations – which are given free by the NHS in the UK – has been falling for years.

Data in September last year revealed uptake in was at its lowest level since 2011 after falling for the fourth year in a row.

Some 91.2 per cent of children in England are being vaccinated, fewer than the 95 per cent needed to stop the virus spreading through a community. 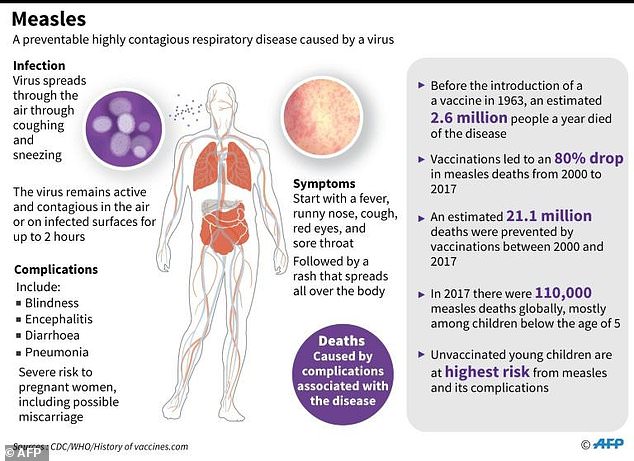 Measles is more contagious than Ebola and, although it usually clears up on its own within a couple of weeks, can cause deadly complications like meningitis and pneumonia

And the World Health Organisation has said ‘vaccine hesitancy’ is one of the 10 most serious threats to global health.

‘Almost all of these cases are preventable and yet children are getting infected even in places where there is simply no excuse,’ said Ms Fore.

‘Measles may be the disease, but all too often the real infection is misinformation, mistrust and complacency.’

Measles is a highly contagious viral infection that spreads easily from an injected person by coughing, sneezing or even just breathing.