RNA or ribonucleic acid is a polymer of nucleotides that is made up of a ribose sugar, a phosphate, and bases such as adenine, guanine, cytosine, and uracil. It plays a crucial role in gene expression by acting as the intermediate between the genetic information encoded by DNA and proteins. 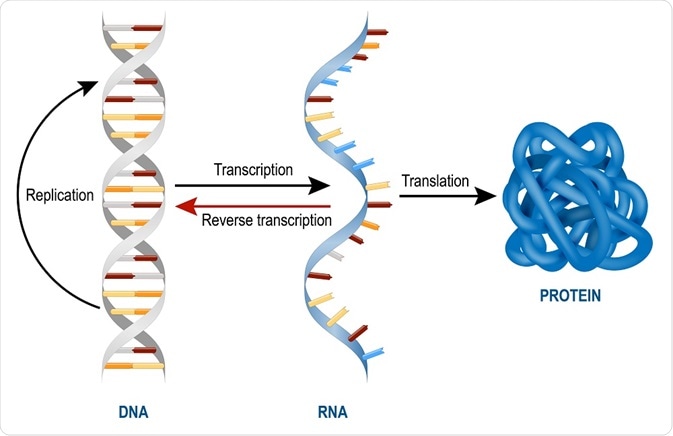 RNA has a structure very similar to that of DNA. The key difference in RNA structure is that the ribose sugar in RNA possesses a hydroxyl (-OH) group that is absent in DNA.

In both prokaryotes and eukaryotes, there are three main types of RNA – messenger RNA (mRNA), ribosomal RNA (rRNA), and transfer RNA (tRNA). These 3 types of RNA are discussed below.

mRNA accounts for just 5% of the total RNA in the cell. mRNA is the most heterogeneous of the 3 types of RNA in terms of both base sequence and size. It carries complimentary genetic code copied, from DNA during transcription, in the form of triplets of nucleotides called codons.

Each codon specifies a particular amino acid, though one amino acid may be coded for by many different codons. Although there are 64 possible codons or triplet bases in the genetic code, only 20 of them represent amino acids. There are also 3 stop codons, which indicate that ribosomes should cease protein generation by translation.

As part of post-transcriptional processing in eukaryotes, the 5’ end of mRNA is capped with a guanosine triphosphate nucleotide, which helps in mRNA recognition during translation or protein synthesis. Similarly, the 3’ end of an mRNA has a poly-A tail or multiple adenylate residues added to it, which prevents enzymatic degradation of mRNA. Both the 5’ and 3’ end of an mRNA imparts stability to the mRNA.

rRNAs combine with proteins and enzymes in the cytoplasm to form ribosomes, which act as the site of protein synthesis. These complex structures travel along the mRNA molecule during translation and facilitate the assembly of amino acids to form a polypeptide chain. They interact with tRNAs and other molecules that are crucial to protein synthesis.

tRNA is the smallest of the 3 types of RNA, possessing around 75-95 nucleotides. tRNAs are an essential component of translation, where their main function is the transfer of amino acids during protein synthesis. Therefore, they are called transfer RNAs.

Each of the 20 amino acids has a specific tRNA that binds with it and transfers it to the growing polypeptide chain. tRNAs also act as adapters in the translation of the genetic sequence of mRNA into proteins. Thus, they are also called adapter molecules.

tRNAs have a cloverleaf structure which is stabilized by strong hydrogen bonds between the nucleotides. They normally contain some unusual bases in addition to the usual 4, which are formed by methylation of the usual bases. Methyl guanine and methylcytosine are two examples of methylated bases.

Other types of RNA

Beyond the primary role of RNA in protein synthesis, several varieties of RNA exist that are involved in post-transcriptional modification, DNA replication, and gene regulation. Some forms of RNA are only found in particular forms of life, such as in eukaryotes or bacteria.

snRNA is involved in the processing of pre-messenger RNA (pre-mRNA) into mature mRNA. They are very short, with an average length of only 150 nucleotides.

A number of types of RNA are involved in regulation of gene expression, including micro RNA (miRNA), small interfering RNA (siRNA) and antisense RNA (aRNA).

miRNA (21-22 nt) is found in eukaryotes, and acts through RNA interference (RNAi). miRNA can break down mRNA that it is complementary to, with the aid of enzymes. This can block the mRNA from being translated, or accelerate its degradation.

Found in many bacteria and plastids. tmRNA tag the proteins encoded by mRNAs that lack stop codons for degradation, and prevents the ribosome from stalling due to the missing stop codon.

One of the ﬁrst ribozymes to be discovered was RNase P, a ribonuclease that is involved in generating tRNA molecules from larger, precursor RNAs. RNase P is composed of both RNA and protein; however, the RNA moiety alone is the catalyst.

This type of RNA has two strands bound together, as with double-stranded DNA. dsRNA forms the genetic material of some viruses.