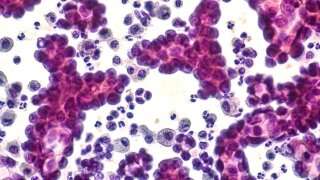 Researchers at the Stanford Institute for Stem Cell Biology and Regenerative Medicine have devised a tool to examine how cells behave and interact in various environments of the body. They’ve used it to better understand how cancer develops and can be treated.

“Now we can look at the building blocks of tissue—the way that the whole cellular ecosystem is structured—rather than just looking at the types of cells present,” said Aaron Newman, Ph.D., assistant professor of biomedical data science and a member of the institute. “It’s a much more powerful way of looking at tissue organization.”

The tool, called EcoTyper, combines new computer algorithms with those previously developed by the researchers to analyze cell types, how they are arranged in relation to one another, and what kinds of RNA messages the cells are creating. The researchers were able to analyze the interactions of cells in large amounts of bulk tissue, using computer analysis to determine where certain cell subtypes live in tissue and how they interact with their neighbors.

“EcoTyper is unique in its ability to decode the cellular architecture of tissues at high definition and massive scale in a cost-effective manner,” Newman said. “This includes being able to analyze the kinds of tissue specimens stored after biopsies or clinical trials, which would otherwise be difficult and expensive to analyze in this way.”

Another advantage of EcoTyper is that researchers can use vast reserves of stored tissue and public databases to run virtual clinical trials, which they’ve done to analyze thousands of cancer cases in a highly cost-effective manner, Newman said.

A paper describing the tool was published Sept. 30 in the journal Cell. Newman, along with assistant professor of biomedical data science Andrew Gentles, Ph.D., are co-senior authors of the article, which showcases EcoTyper’s capabilities with an analysis of the tissue architecture in different types of solid cancer tumors. The lead authors are postdoctoral scholars Bogdan Luca, Ph.D., and Chloé Steen, Ph.D.

A companion article, published Sept. 30 in the journal Cancer Cell, describes how EcoTyper was used to identify subtypes of lymphoma cells. Newman and Ash Alizadeh, MD, Ph.D., professor of oncology, are the senior authors of that paper. The lead authors are Chloé Steen, Ph.D., and Bogdan Luca, Ph.D.

‘EcoTyping’ cancer cells and their neighbors

While lung cancer might look very different from bladder cancer or other types of cancerous tumors under the microscope, EcoTyper enabled the researchers to find 10 distinct multicellular communities, dubbed “ecotypes,” that exist in more than a dozen different tumor types. They also found that the presence or absence of certain ecotypes in a tumor was highly predictive for outcomes and often indicated what kinds of treatment would work best, even for different types of cancer, the researchers say.

“We found one ecotype that was predictive of a good response to a particular immunotherapy,” Luca said. “In fact, it was even a better predictor than other candidate biomarkers that we tested, even ones that were specifically sought out to be predictive of response.” In addition, with EcoTyper, the researchers were able to predict whether a pre-malignant lesion—an abnormal growth that may become cancerous—in the lungs would spontaneously regress or develop into lung cancer.

“EcoTyper can provide a platform for future therapies, because you have a better idea of the bad cells in a tumor you want to attack,” Gentles said. This focus on interacting cell populations in a tumor is different from current approaches, which usually target “driver mutations” or genes along a certain pathway. “Many cancer therapies are focused on a given cell type or gene, but there are always other cells contributing to the cancer or cells that don’t have that gene mutation,” and those are equally valuable treatment targets, he added.

Turning to the most common blood cancer

The researchers whose paper was published in Cancer Cell sought to discern whether there are two different subtypes of a certain kind of lymphoma, as has generally been accepted in the field. Using EcoTyper, they analyzed the microenvironment found among and surrounding diffuse large B-cell lymphoma cells. By looking at how cancerous and noncancerous cells arranged themselves and interacted, they were able to differentiate between not just two subtypes, but nine different subtypes, of this lymphoma.

Because the researchers were working on tissue samples from previous lymphoma cases, they also had a record of how patients fared. “We found that not only were there many more subtypes of this B-cell lymphoma than previously recognized, but we also were able to show that knowing which subtype people had gave us an improved ability to make predictions about how the cancer would likely progress,” Steen said.

The investigators were able to find positive results from a clinical trial of a lymphoma drug that had seemed to fail. In effect, the researchers reran the clinical trial, this time employing EcoTyper and including their new understanding of how many more types of this B-cell lymphoma there were.

“What we saw was that there was in fact a specific lymphoma subtype that responded to the therapy,” Alizadeh said. “But in the original trial, they couldn’t identify these other subtypes, so this promising sign of efficacy was lost among the negative results for all the other lymphoma subtypes.”