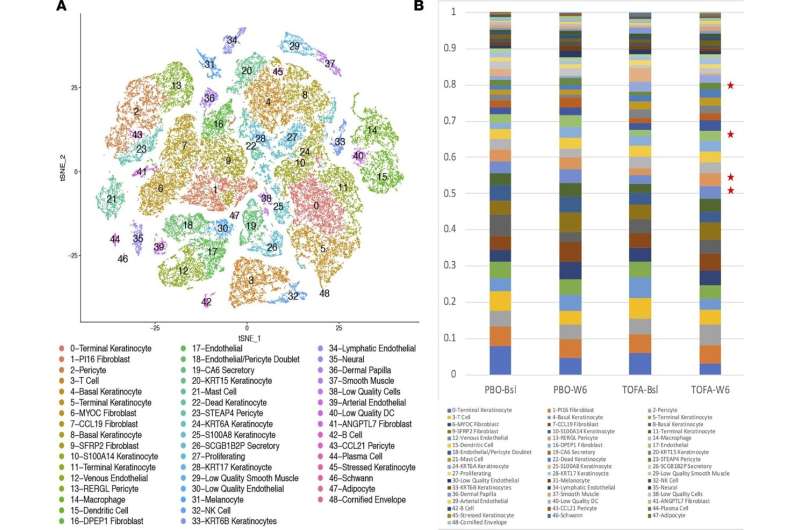 Systemic sclerosis—or scleroderma that affects the skin and internal organs—is one of the rarest autoimmune diseases, affecting roughly 100,000 people (primarily women) in the United States. However, systemic sclerosis is devastating—it has the highest mortality rate among rheumatic diseases, according to Dinesh Khanna M.B.B.S., M.Sc., director of the Michigan Medicine Scleroderma Program.

And with no licensed treatments available for this subset of scleroderma patients, rheumatology researchers are constantly searching for opportunities to use resources and technology that have proven beneficial in treating other autoimmune and rheumatic diseases.

One resource that clinicians at Michigan Medicine and the University of Pittsburgh recently explored in early-stage systemic sclerosis was an FDA-approved rheumatoid arthritis drug, tofacitinib. Their goals for the study included finding out if the drug was safe in patients and to understand how the drug would mechanically work at the cellular level in the disease.

“We wanted to understand first, if there was any clinical benefit of tofacitinib to patients, but we were also asking, what are the differences in the cells of healthy skin versus systemic sclerosis cells…how does the drug work?” said Khanna.

In their new study published in JCI Insight, researchers found that tofacitinib was well tolerated among patients with early systemic sclerosis, and discovered the drug primarily affected the protein, interferon, both in fibroblasts and keratinocytes cells.

The study sample size consisted of 15 patients with early diffuse cutaneous systemic sclerosis —patients with skin hardening and issues with organs. Of the total participants, 10 patients received 5 milligrams of tofacitinib twice a day, and the remaining received placebo in a double-blind randomized placebo-controlled trial.

Over the course of the 24-week trial period, researchers found no patients who exhibited severe adverse effects at or before the trial ended. Additionally, to measure tofacitinib’s effectiveness, the modified Rodnan skin score (mRSS) and other measures were used with patients to measure improvement throughout the trial.

These results showed that the average mRSS score and other measures improved over the course of the trial. In addition, patients on placebo went on open label tofacitinib after 24 weeks and there was ongoing improvement during the next 24 weeks, indicating improvement in the measure.

“We are delighted to find that the drug is safe to use and can possibly be repurposed for systemic sclerosis treatment,” said Khanna, “but what made this study innovative was the use of single cell technology.”

Participants in the study had a skin biopsy at the start of the trial and then again six weeks after they received tofacitinib or placebo. Then, clinicians used the relatively new technology—single cell RNA sequencing—to watch the mechanism of tofacitinib at work in the trial participants’ skin cells.

“This work highlights the ability of single-cell RNA-sequencing to determine how disease states are maintained and how various cell populations in the skin, both fibroblasts, skin cells, and immune cells communicate, providing unparallelled power to address disease mechanisms, and how drugs, like tofacitinib, work in a disease where they have not previously been used,” said Johann Gudjonsson M.D., Ph.D., professor of dermatology and a collaborator on this study.

Along with discovering how tofacitinib inhibits cells that help form connective tissue (fibroblasts) and skin cells (keratinocytes), researchers found that the drug had minimal effect on T-cells—the important white blood cells that are essential in the immune system.

“Because we found that the drug was working on one part (the mechanism of fibroblasts and keratinocytes), we are now considering if we can combine tofacitinib with another drug with complementary mechanism in action, in order to treat early systemic sclerosis without causing toxicity,” explained Khanna.

To understand more about the drug, researchers will need to conduct a more robust study and trial to see if their recent discoveries hold true.