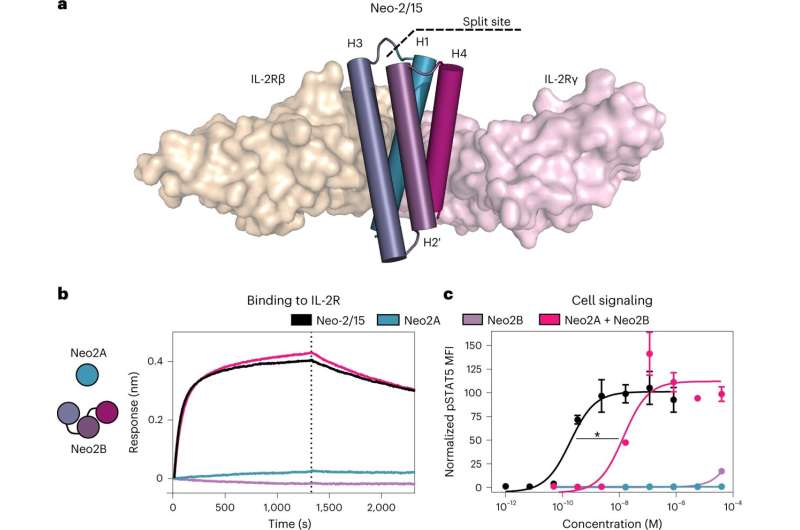 A new study shows that when an experimental cancer medication is split in half, the molecule becomes safer and more effective.

Scientists at the University of Washington School of Medicine were looking for ways to improve a promising cancer drug called Neo-2/15. This protein was created to mimic the function of Interleukin-2, or IL-2, which is a natural molecule that can amp up immune cells to fight off infections and cancer.

While IL-2 can be used to treat some cancers, this systemic cytokine therapy also causes toxic side effects in patients. The scientists designed Neo-2/15 to be a “better version” of IL-2, one where those side effects are mediated.

To further improve Neo-2/15, a team led by recent UW Bioengineering graduate student Alfredo Quijano-Rubio dissected the molecule. When chopped up just the right way, the resulting drug fragments displayed neither beneficial activity nor unwanted side effects. When the fragments were recombined on the surface of cancer cells, however, the drug’s activity could be restored.

The team tested the new split-drug approach in cancerous mice. As expected, individual drug fragments did not show any antitumor activity. Yet when both fragments were given in the right dosage, some animals achieved complete tumor remission with no toxic effects. This was not the case for mice treated with IL-2 or intact Neo-2/15, which while efficacious can show systemic toxicity at high doses.

“By controlling when and where drugs become active in the body, we may be able to create safer and more effective cancer treatments,” said Quijano-Rubio.

The study is published in Nature Biotechnology.