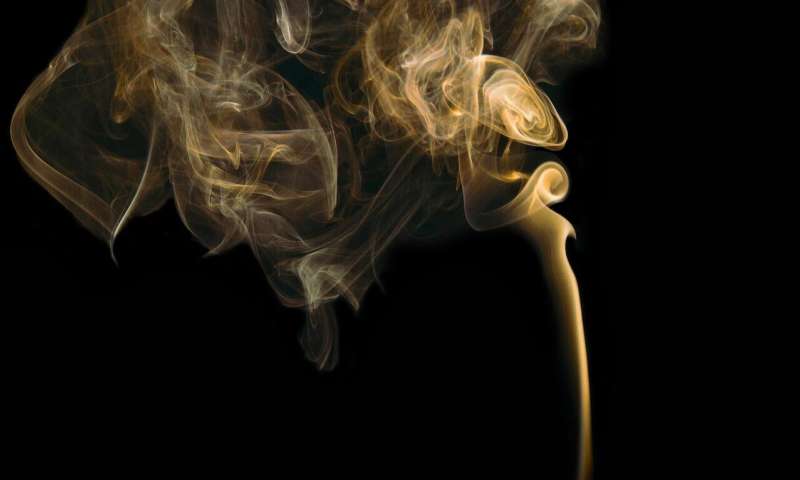 People can carry hazardous compounds from cigarette smoke that cling to their bodies and clothes and then release those compounds into non-smoking environments—exposing people nearby to cigarettes’ adverse effects, a new study shows.

For the last decade, third-hand smoke has been described as the residual contamination from cigarette smoking that adheres to walls and other surfaces in places where smoking has previously occurred. For example, hotels and rental car companies have implemented smoking restrictions to limit this contaminating odor from their rooms and cars.

A team of researchers led by Yale’s Drew Gentner shows for the first time that this third-hand smoke can travel in large quantities into indoor, non-smoking environments by way of humans. The research suggests that even if someone is in a room where no one has smoked, that person could still be exposed to many of the hazardous chemical compounds that make up cigarette smoke, depending on who else had entered the room or previously visited it. The results were published March 4 in Science Advances.

“In real-world conditions, we see concentrated emissions of hazardous gases coming from groups of people who were previously exposed to tobacco smoke as they enter a non-smoking location with strict regulations against indoor smoking,” said Gentner, associate professor of chemical & environmental engineering. “People are substantial carriers of third-hand smoke contaminants to other environments. So, the idea that someone is protected from the potential health effects of cigarette smoke because they’re not directly exposed to second-hand smoke is not the case.”

The researchers brought highly sensitive analytical instrumentation into a movie theater to track thousands of compounds, present as either gases or particles, over the course of a week. A diverse range of volatile organic compounds found in tobacco smoke spiked dramatically when certain audiences arrived for the movies. These increases were minor for G-rated movies, while audiences for R-rated movies—which included moviegoers more likely to smoke or to be exposed to smoke—consistently released much larger quantities of these compounds into the theater. The relative proportions of these emitted compounds confirmed that they were from slightly aged cigarette smoke.

“Despite regulations preventing people from smoking indoors, near entryways, and near air intakes, hazardous chemicals from cigarette smoke are still making their way indoors,” said Roger Sheu, a Ph.D. student in Gentner’s lab and lead author of the study.

The amount of these hazardous and reactive gases wasn’t trivial, the researchers said. The gas emissions were equal to that of being exposed to 1-10 cigarettes of secondhand smoke in a one-hour period. These emissions and air concentrations peaked upon audience arrival and decreased over time, but not completely, even when the audiences left. In many cases, the movie-goers left a persistent contamination observable the following days in the unoccupied theater. The researchers said that is because the chemicals don’t remain entirely in the air, but are also adsorbed onto various surfaces and furnishings, just as it does with third-hand smoke contamination in places where smoking has occurred.

The researchers also found a predominance of nitrogen-containing compounds from cigarettes, which would have migrated from people to other indoor surfaces.

“In particular, we noticed that nicotine was the most prominent compound by far,” said co-author Jenna Ditto, a Ph.D. student in Gentner’s lab.

The researchers said these results on human transport of third-hand smoke now help to explain why previous studies had found notable quantities of nicotine on surfaces in numerous non-smoking environments.