We have long loved to make fun of people who cry.

Whether it’s Ricky Gervais mocking celebrities whose faces crumple on hearing about the sad fates of their ancestors on the show Who Do You Think You Are, or the world dumping on Claire Danes for her crumpled face in so many roles – “Her whole face looks like it’s chewing gum,” as a spoof on Saturday Night Live put it – it’s long been something of a global sport. 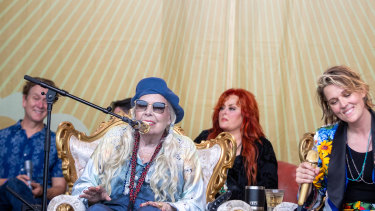 “I’m still like: what the heck just happened,” singer Wynonna Judd, pictured third from the left, said of her “ugly-crying” at the Newport Folk Festival last weekend. “I’m not thrilled about it. Who would be there?”Credit:Getty

But then, yesterday, a video of Wynonna Judd “ugly-crying” at the Newport Folk Festival went viral.

“I’m still like, ‘What the heck just happened?’,” Judd said afterwards about how she appeared on stage, her face contorting as she seemed to oscillate between feeling howling pain and resignation, while listening to Joni Mitchell sing her classic song, “Both Sides Now”. Mitchell’s song is famously about lost youth, and what we leave behind as we move forward. At one point, Judd looks up at the sky for a few beats, seemingly in a bid to hold back her tears.

“Oh my… we all are Winona [sic] Judd here,” wrote one person, echoing the tweets of many. “Lots of dust in the room.”

“God bless #WinonaJudd and her tears, there in the background, I’m sure we can all relate,” wrote another.

Many assumed Judd was reflecting on the recent loss of her mother, Naomi Judd, to suicide in April.

But she was not happy about her behaviour.

“I know I was ugly-crying most of the time, and I’m not thrilled about it,” said Judd. “Who would be there?”

But I, like many others, am so grateful she did.

Haven’t we hidden ourselves – our uncomfortable and confronting reactions to the messiness of being human – for too long? And isn’t it wearying, constantly brushing off what we’re going through for the sake of public composure, or from a fear that we’ll freak people out if we let rip?

Like many people around the world, I’ve suffered loss during the pandemic. My mother died in April. I no longer have any parents. The grief has been monolithic. But, to my surprise, I’ve struggled to cry much. And when I do, it’s been mostly full-throttle ugly crying. In public.

This is not like me. Like most people, I generally like to avoid looking as though I might be about to throw myself in the ocean. I prefer to look more composed on the outside, no matter how discombobulated I’m feeling on the inside. This is how we get jobs. And partners.

So, when my father died, 17 years ago, I managed, for the most part, to keep my ugly crying indoors. I heaved with tears every morning in the shower, like clockwork, for a year. But, now between a job and three kids, there’s been a lot less opportunity – when reminders of my loss hit me – to be silent with my thoughts and reflect on my pain. (Let’s face it, I shower less.)

Just the other day, in the middle of writing an article on deadline, I received a text from my brother about what we should put on my mother’s tombstone. I had no time to speak to my brother, so instead I texted my husband: “I hate that my mother is dead! My mother is dead!” Then I had to get back to work.

Perhaps this is why when I do have the opportunity to reflect on how it feels to have no parents, it all comes spilling out.

Like the other day, while jogging along the ocean. I saw the undulating waves and thought: my parents will never again see the ocean. They’re not here to witness anything I’ll ever do again. To know if I’m safe. Suddenly, I was undone. Still jogging, my chest heaved and I let out a high-pitched and drawn-out note that, I imagine, a baboon makes when it’s been hit by a dart.

I had nowhere to hide as I jogged past couples and young mothers who were walking past me. I felt as though I was jogging naked, so raw and exposed was my pain.

The next day, I saw the video of Judd.

I all but fist-pumped the sky. It wasn’t just that she made me feel less alone. It was that when I saw her ugly-crying, I saw beauty. To see her face break in different ways was to see the full spectrum of what it means to be alive: the sadness and the resignation. The joy and the grief. It looked like living.

I’ve never seen the ugly cry in this light.

This is no surprise, given that the ugly cry – especially for women – is so taboo, says Dr Lauren Rosewarne, who specialises in gender at the University of Melbourne, and has written about public emotions.

“Women, particularly, know they’re always being judged by their appearance, so that idea of ugly crying, as opposed to delicate dabbing of the eyes, you’re sort of giving yourself over to the emotion, it’s much more rare [publicly],” she says. “Particularly if you know you’re being observed.” Because, she adds, women are also often judged as irrational if they show too much emotion.

“Which means women often reign it in. Because there is this fear, kind of like the ‘Don’t cry in the workplace’ [norm], that fear that this will be a part of the way I’m judged or appraised.”

I hope that the next time I ugly cry in public, I’ll be able to channel Judd, who has come to appreciate her emoting at the Newport festival.

“I feel like I was meant to be a messenger about how precious life is, because of my mother,” she said. “It was like magic – like death and life at the same time.”