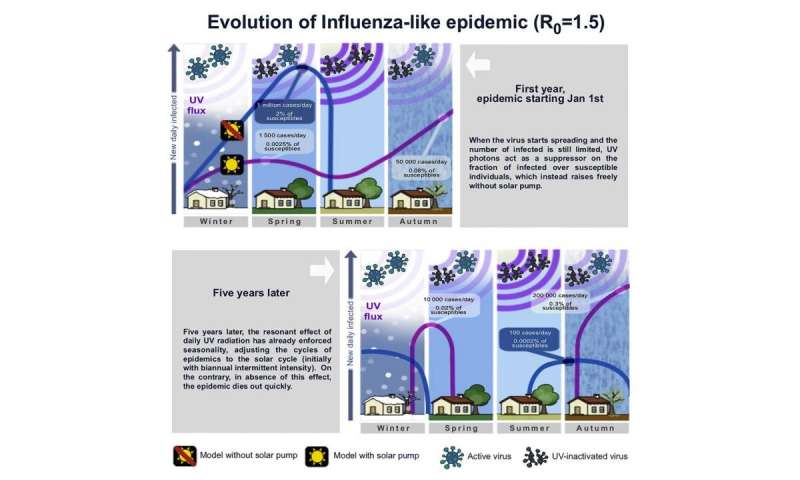 Why do most viral epidemics spread cyclically in autumn and winter in the globe’s temperate regions? According to an interdisciplinary team of researchers of the Italian National Institute for Astrophysics, the University of Milan, the Lombardy regional agency for the environment and the Don Gnocchi Foundation, the answer is intimately related to the sun. Their theoretical model shows that both the prevalence and evolution of epidemics are strongly correlated with the amount of daily solar irradiation that hits a given location on the Earth at a given time of the year. The work of the Italian team was recently published in the iScience journal.

“Our model offers a simple answer to an important, yet still unsolved, scientific question,” says Fabrizio Nicastro, INAF researcher and PI of the work. “Why do many viral respiratory epidemics, such as influenza, develop cyclically during autumn and winter only in the temperate regions of the globe’s northern and southern hemispheres, while they seem to be present at all times—albeit with lower prevalence compared to the seasonal cycles in the temperate regions—in the equatorial belt? And what triggers and determines such seasonality? In our work, we propose that what causes the seasonality of airborne-transmitted epidemics is exactly the same mechanism that causes seasons on our Planet: the amount of daily solar irradiation on the Earth.”

It is well known that ultraviolet (UV) light is able to deactivate viruses and bacteria of many different kinds. The solar UV light that reaches the Earth must therefore have some disinfecting power on the exposed parts of the Planet. The efficiency of the UV deactivation of a particular virus or bacterium depends on the virus or bacterium itself, but, for a given location on Earth, it is undoubtedly greater when the solar irradiation is stronger (summer) and lower when the solar irradiation is weaker (winter). Such cyclicality of the solar disinfecting action, with annual frequency, is able to constructively resonate with another frequency typical of epidemics: the loss of immunity of the virus’s host due to its antigenic shift/drift. The combination of these two mechanisms triggers the seasonality of epidemics, on timescales that range from a few years to tens of years, depending on the antigenic frequency.

The model proposed by the Italian researchers reproduces the seasonality observed in different locations of the Earth accurately for epidemics with an intrinsic reproductive number (R0) lower than about 2—an influenza typically has R0~1—and is also able to model epidemics with a much larger intrinsic reproductive number, such as the current SARS-CoV-2 pandemic with R0≈3-4. These models predict high-intensity intermittent initial cycles, which eventually stabilize (on timescales that depend on the antigenic-shift frequency) onto seasonally-synchronized, moderate-intensity annual cycles.

“From an epidemiologic point of view, these models clarify an important and long-standing mystery: why do influenza epidemics disappear every year when the number of susceptible individuals is still very far from that needed to trigger the herd immunity mechanism?” adds Mario Clerici, Immunologist at the University of Milan and the Don Gnocchi Foundation.