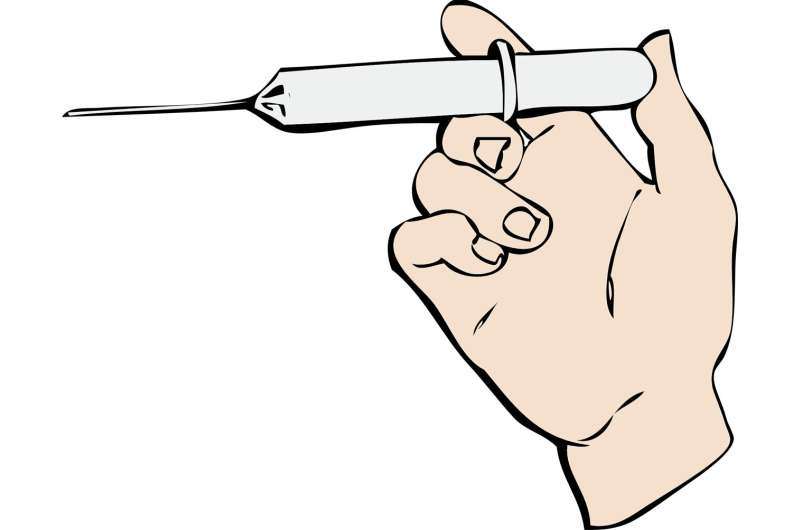 The opioid epidemic has led to a meteoric rise in injection drug use over the past decade, according to a study funded by the Centers for Disease Control and Prevention, which experts say may also have contributed to an increase in overdoses and infectious diseases.

Researchers from the Coalition for Applied Modeling for Prevention (CAMP) used a combination of federal surveillance data and published research that calculated the rate of overdoses among people who injected drugs.

The modeling study estimated nearly 3.7 million people in the U.S. injected drugs at one point during 2018—a fivefold increase from the most recent estimate in 2011.

“These are our family and friends and neighbors, and it’s fairly likely that we all know somebody who has injected in the past or is currently injecting,” said lead study author Dr. Heath Bradley, associate professor of epidemiology at the Georgia State University School of Public Health. “We’re hoping that getting this estimate out helps to reduce some of the stigma and otherness that others feel about this population.”

Health experts say the study could help show officials where to direct resources in the opioid epidemic, including safe injection sites, treatment strategies and prevention against infectious diseases like hepatitis C and HIV.

New cases of HIV have steadily decreased over the past decade in the U.S., but the CDC reports 10% of new diagnoses in 2018 were among people who injected drugs.

The agency says sharing syringes is considered the second-riskiest behavior for getting HIV because used needles, syringes and other injection equipment could carry someone else’s infected blood.

“If you look at the HIV trends nationally, trends are going down,” said Dr. Thomas Britton, CEO of the American Addiction Centers. “But at the same time, (intravenous) drug users are taking a big, disproportionate hit.”

Hepatitis C is a liver infection caused by the HCV virus, which is spread through contact with blood from an infected person, and can result in long-term health problems including liver damage, liver failure, cirrhosis, liver cancer and death.

The CDC says more than half of people who become infected with hepatitis C will develop a chronic infection. There are vaccines to prevent hepatitis A and hepatitis B, but there is no vaccine for hepatitis C.

“We tend to think that it mostly affects baby boomers,” said Bradley, referring to the CDC’s blanket recommendation of screening all adults born between 1945 and 1965. “We’re starting to see hepatitis C deaths among young people, particularly in parts of the country who were heavily hit by the opioid epidemic.”

Even though the study has several limitations, like excluding commercially insured Americans, Britton said it may be one of the closest estimates of an important data point that always has been difficult to capture.

Older methods using data collected in door-to-door surveys found about 774,000 people injected drugs in 2011, but the research team’s model estimated the real number may be closer to 1.3 million.

“This is a problem that I’ve been thinking about for at least five years, now,” Bradley said. “As we try to count things that are hard to count, we have to come up with creative solutions.”

The CDC’s National Center for Health Statistics reported an estimated 100,306 drug overdose deaths in the U.S. in the 12 months ending in April 2021, a nearly 30% increase from the same period the year before.

“By injecting a substance versus consuming it in some other way, you’re much more likely to experience an overdose,” Bradley said. “It’s essentially the most powerful way of consuming a substance, and we see much higher rates of overdoses even given the same drug type of people who inject versus consume orally.”

Before the COVID-19 pandemic, Britton said, the “overdose epidemic” was the biggest public health crisis in the country.

But Bradley wants to remind people that injecting drugs represents a small part of someone’s life, and meeting their needs during this vulnerable time can help reduce overdose deaths.