A husky voice, EAR pain and not being able to stick your tongue out straight: Six of the lesser-known symptoms of mouth cancer

You might think having a husky voice is nothing to worry about.

And, chances are, you’re probably right.

But doctors claim it could potentially be a sign of mouth cancer — a disease which strikes thousands every year.

With November marking mouth cancer awareness month, MailOnline has compiled six of lesser-known symptoms of the illness. They include hearing a ringing sound in your ear and not being able to stick your tongue out straight. 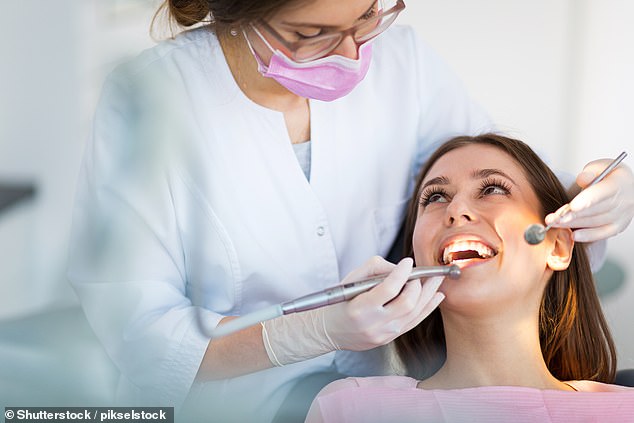 The lesser-known signs of mouth cancer include, ear pain, numbness, wobbly teeth, a lisp and even not being able to stick your tongue out. It is important you tell your dentist or doctor if you notice any of these symptoms

More than 8,000 people are told they have the disease every year in Britain, while the figure in the US stands close to 55,000.

Squamous cell carcinoma is the most common type of oral cancer, making up almost 90 per cent of cases.

Squamous cells are found in the tissue that forms the surface of the skin, such as inside the mouth and on the arms and legs.

According to the NHS, other common types of mouth cancer include:

Experts stress it is vital to catch the early signs of mouth, or oral cancer, early on.

‘Early detection boosts our chances of survival from 50 per cent to 90 per cent.’

Dr Julie Sharp, head of health and patient information at Cancer Research UK added: ‘In most cases, these will be a sign of something less serious than cancer.

‘But it is important to tell your doctor or dentist if you notice any of these symptoms or anything else that isn’t normal for you.’

A lisp and/or husky voice

Changes in speech and even a lisp could be signs of mouth cancer.

Your voice may become huskier or quieter and sound a bit like when you have a cold if the cancer is near the back of your throat, according to Cancer Research UK.

A husky voice can be a sign of hypopharynx cancer, which affects the back of the throat and potentially the vocal chords.

Swelling in your mouth caused by the cancer could also give you a lisp and make it difficult to say particular words or cause you to slur some.

Ms Coates said: ‘You can get a voice change if the cancer is further back in your mouth and affects your throat.

‘It can also affect speech if your tongue has cancerous cells or is near the cancer site.’

But a change in your voice could also be a sign of something less serious such as a common cold, laryngitis or even acid reflux.

Not being able to stick your tongue out

But not being able to stick your tongue out straight is one of the more bizarre symptoms of the disease.

Just how mouth cancer can give you a lisp if the cancerous lumps are on or near the tongue, it can restrict movement, according to Ms Coates.

It is more common in certain types of mouth cancer including tongue, soft palate or lip cancer.

It is also associated with squamous cell carcinoma.

This is the cancer of the flat, skin like cells that cover the lining of the mouth, nose, larynx, thyroid and throat, according to Cancer Research. 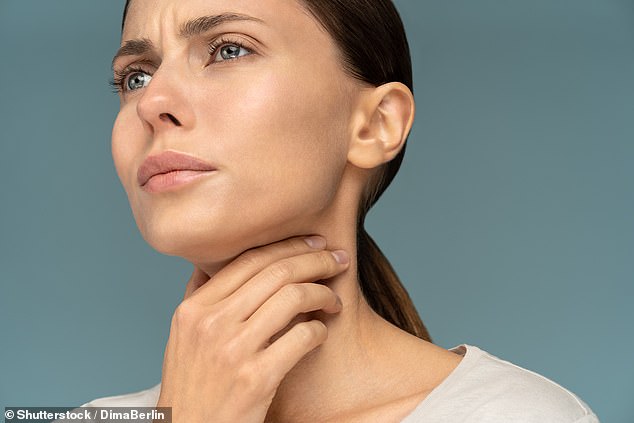 As well as a persistent sore throat changes in speech and even a lisp could be a sign of mouth cancer not to dismiss. According to Cancer Research UK your voice may become huskier or quieter and sound a bit like when you have a cold if the cancer is near the back of your throat 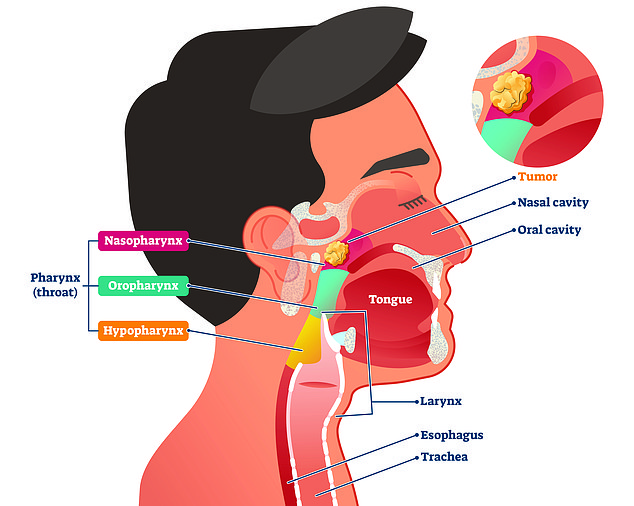 Tinnitus is a symptom of nasopharyngeal cancer, a rare type of cancer that affects a specific part of the throat, that connects the back of the mouth to the nose called the nasopharynx. This diagram shows the different parts of the mouth, throat and nasal cavity

Ear pain, numbness, or a stiff jaw can be caused by a tumour that is sat on a nerve or a bone.

Ms Coates said: ‘Both ear pain and a numb mouth will depend on where the tumour is as it can affect the nerves.

‘Another factor can be the size of the tumour as to how much it will impact the rest of your mouth.

‘Tumours can affect bones, tissue, organs and glands surrounding them.’

An odd feeling in your mouth or jaw, a rough patch or numbness of the lip or tongue could be a sign to visit your dentist or GP.

But ear pain and numbness are not just a sign of cancer, it could also be caused by a headache or an earache.

Teeth that become loose for no obvious reason is another potential mouth cancer warning sign, according to the NHS.

It is not normal for adults to get wobbly teeth and doctors state it should not be ignored.

Experts say tumours, lesions, cracking and bleeding gums can cause the teeth to become loose.

On top of this, mouth cancer sufferers may see their tooth socket struggle to heal properly after extractions, according to the NHS.

Even if it is not mouth cancer, a loose tooth could be caused by gum disease or an impact injury. So medics advise those with these symptoms to speak with a doctor or dentist. 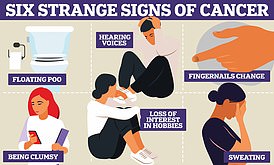 Unusual lumps, a persistent cough and headaches are the cancer warning signs doctors tell you to watch out for.

But floating poo, excessive sweating and hearing voices are some of the stranger signs tumours give off.

Many of these symptoms are exceptionally common and can be caused by a lot of different conditions.

A ringing in your ear, known as tinnitus, is a rare symptom of mouth cancer.

Tinnitus can also feel like a buzzing, throbbing or hissing in your ear.

While these noises are not usually anything serious, it can be caused by a tumour located near the jaw, ear or nose because it affects the nerves surrounding it.

Tinnitus is particularly a symptom of nasopharyngeal cancer, a rare type of cancer that affects a specific part of the throat, that connects the back of the mouth to the nose.

Other warning signs of this type of head and neck cancer include having frequent nosebleeds and having a persistent blocked or stuffy nose.

However, spotting this cancer can be tricky as the symptoms are similar to some other, less serious medical conditions.

Unintentional weight loss is a common symptom of many different types of cancer.

Mouth cancer can make it painful to eat or difficult to swallow due to tumors and ulcers, so could cause sufferers to lose their appetite, according to Cancer Research.

But this is not the only cause of weight loss.

Extreme weight loss when you are not dieting and eating plenty of food can be a sign of cachexia — when the body burns through calories faster than usual and sheds muscle and fat.

Along with cancer, it can occur in the advanced stages of illness, such as heart and kidney disease, as well as HIV.

Scientists don’t fully understand the mechanisms behind cachexia. But in cancer patients, they believe tumours release chemicals into the blood that contribute to the loss of fat and muscle. 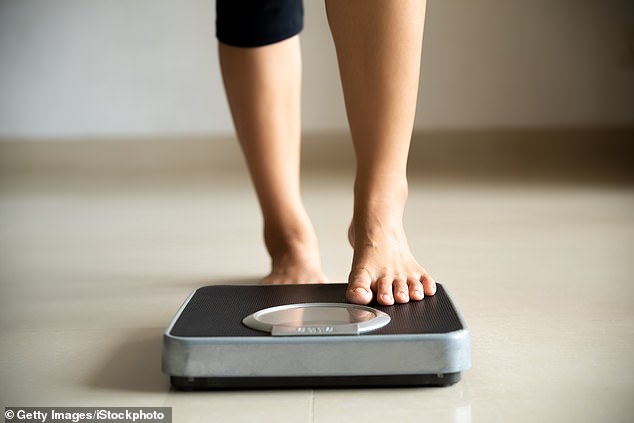 According to Cancer Research, because mouth cancer can make it painful to eat or difficult to swallow due to tumors and ulcers, it could cause you to lose your appetite

What can I do to cut my risk?

The risk of mouth cancer is almost double for smokers. Around two-in-three mouth cancers are directly caused by smoking.

Similarly, alcohol to excess is responsible for around a third of all mouth cancers.

Dr Sharp said: ‘If you are someone who smokes, stopping smoking completely is the best thing you can do for your health.’

She added: ‘Cutting back on alcohol can also reduce your risk of seven different types of cancer, including mouth cancer.

‘The more you cut down, the lower your risk. Try having more drink-free days or alternating alcoholic drinks with non-alcoholic ones.’

According to the Oral Health Foundation, those who drink between 1.5 and six units of alcohol a day could be increasing the risk of mouth cancer by 81 per cent.

The charity added the human papillomavirus (HPV) type-16 and 18 are also linked to around three-in-four of oropharyngeal cancers, a tonsil cancer, and more than one-in-ten oral cavity and hypopharynx cancers.