Throughout each stage of its life cycle, the severe acute respiratory syndrome coronavirus 2 (SARS-CoV-2) interacts with host membranes. Moreover, SARS-CoV-2 penetrates the cell by crossing the plasma membrane, thus replicating inside host-derived membrane compartments. SARS-CoV-2 subsequently obtains its envelope from the host and exits the cell through the Golgi apparatus and lysosome.

For viruses to fulfill their structural, metabolic, and trafficking requirements, they must rely on host pathways; however, viruses often need to modify these pathways to be effective. SARS-CoV-2, for example, re-engineers the host internal membranes into double-membraned vesicles (DMVs) and convoluted membrane (CM) areas to enable replication. 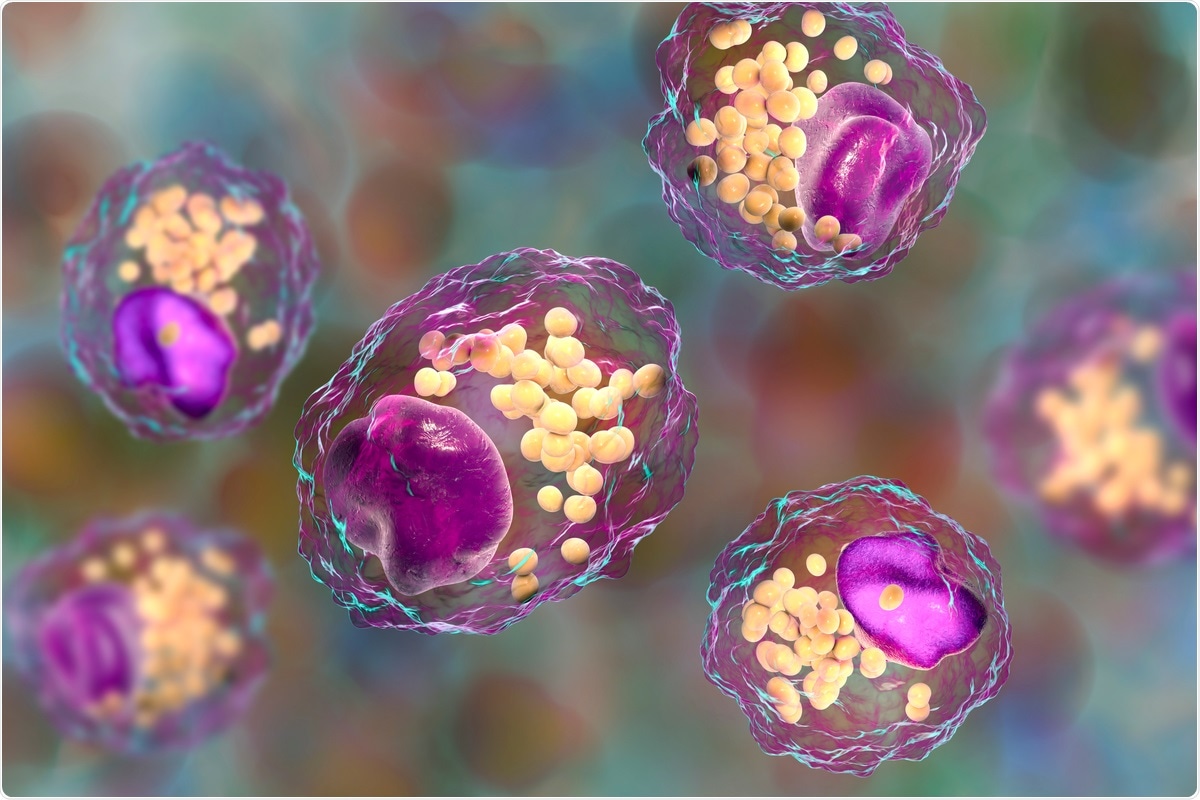 Several previous studies have found that SARS-CoV-2 infection involves the modulation of host lipids as a core characteristic. Several lipids and lipid-associated proteins, such as very-low-density lipoproteins (VLDL) and high-density lipoproteins (HDL), steroid hormones, and various apolipoproteins have been identified as biomarkers of infection.

Furthermore, elevated triacylglycerol (TAG) and polyunsaturated free fatty acids are suspected of being involved as markers of severe disease outcomes. Obesity, diabetes, and hypertension have also been identified as important risk factors in people who acquire severe COVID-19.

In a recent study posted to the preprint server bioRxiv*, SARS-CoV-2 appears to alter host lipid biosynthesis by relying on certain human metabolic pathways to survive and multiply effectively. To come to this conclusion, the authors conducted an intricate lipid study of both infected cells and cells ectopically expressing individual SARS-CoV-2 proteins.

The researchers first conducted global lipidomic profiling of HEK293T cells that overexpress the angiotensin-converting enzyme 2 (ACE2) receptor, which is primarily used by the SARS-CoV-2 spike protein to enter host cells. These cells were then infected with either SARS-CoV-2 or a control virus for 24 hours, which was followed by an analysis of cellular lipids through liquid chromatography electrospray ionization tandem mass spectrometry (LC-ESI-MS/MS).

Taken together, a total of 514 lipids were identified in HEK293T cells. Of these lipids, 79.6% differed between the SARS-CoV-2 and mock-infected cells, the levels of which changed between2- and 64-fold following infection.

The researchers then sought to understand how lipid composition was altered following exposure to SARS-CoV-2. To this end, the most significant changes were observed in both glycerolipids and phospholipids, with TAG and cardiolipin (CL) exhibiting the greatest changes, with changes in the TAG species being dependent upon their fatty acid composition. More specifically, TAG species with polyunsaturated fatty acid (PUFA) chains were found to be eight times more abundant than saturated or monounsaturated species in SARS-CoV-2 infected cells. 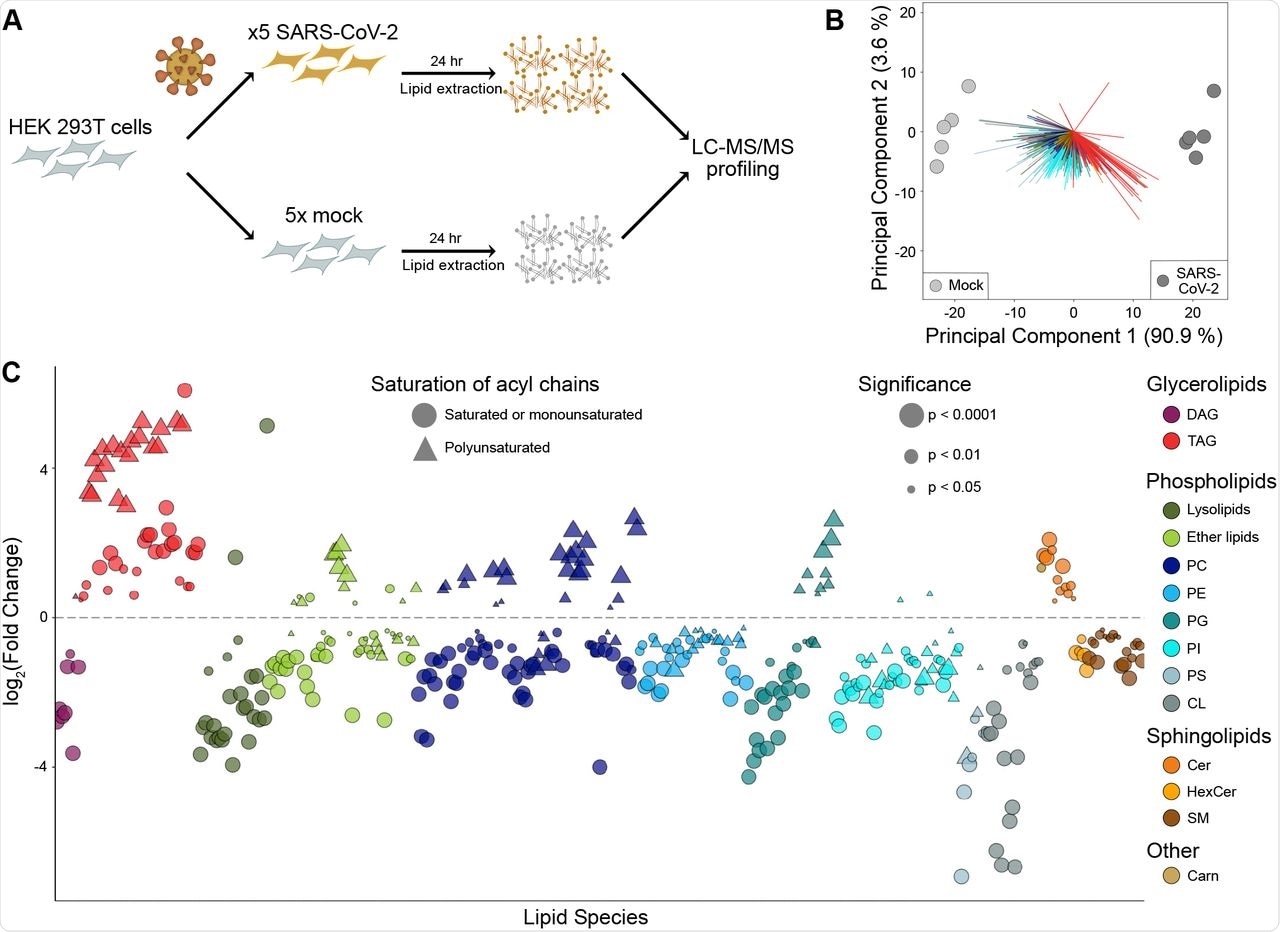 SARS-CoV-2 alters the lipid composition of its host cells.

Untargeted lipidomic profiling of cells transfected with each SARS-CoV-2 protein was then performed, aside from nsp3, nsp14, nsp15, nsp16, and orf3b due to transfection efficiency challenges. After 48 hours, total cellular lipids were extracted from these proteins and subsequently analyzed by LC-ESI-MS/MS.

Taken together, 396 unique lipids were identified from the SARS-CoV-2 proteins, which consisted of glycerolipids, phospholipids, sphingolipids, and acyl-carnite lipids. Of these lipids, 80% were significantly changed in at least one transfection with a given SARS-CoV-2 protein.

After acquiring the aforementioned data, the researchers looked to better understand how each SARS-CoV-2 protein affects lipid remodeling during infection. TAG, for example, exhibited an increase in remodeling by SARS-CoV-2 orf6, nsp5, orf9c, orf3a, and orf7a proteins, whereas polyunsaturated PC was impacted by orf6, orf9c, orf9b, and E.

Taken together, the findings from these experiments point to TAG as the most significantly and substantially increased lipid following SARS-CoV-2 infection. Notably, other viruses including hepatitis C virus (HCV) and rotaviruses both cause lipid droplets (LDs) to accumulate during infection, which are the cellular reservoirs for TAGs. The researchers observed a similar phenomenon to occur following infection with SARS-CoV-2, wherein LDs increased in each infected cell in a time-dependent manner.

By thoroughly examining the effect of individual viral proteins on host lipids, the researchers were able to reveal a complex network of many different SARS-CoV-2 proteins that play a role in different aspects of host lipid remodeling. Thus, the use of glycerolipid production inhibitors to prevent viral replication highlights the value of both of the lipidomic datasets in understanding COVID-19 pathophysiology and their potential as anti-SARS-CoV-2 treatment options.

Given the rapidly spreading and mutating nature of SARS-CoV-2, it is vital for scientists to understand the underlying biology of its life cycle to assist in the development of prophylactic and therapeutic options for COVID-10.

Colin graduated from the University of Chester with a B.Sc. in Biomedical Science in 2020. Since completing his undergraduate degree, he worked for NHS England as an Associate Practitioner, responsible for testing inpatients for COVID-19 on admission.