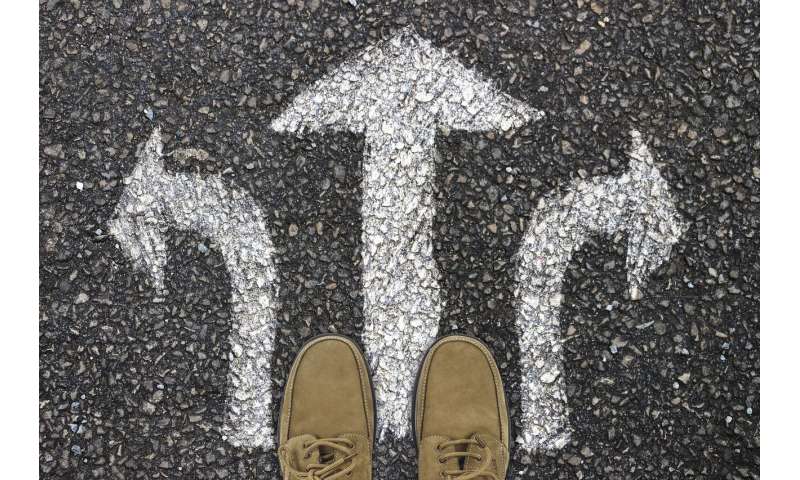 A brain chemical called noradrenaline is responsible for our responses to uncertain situations—helping us to learn quickly and adapt our behaviour, a new study has found.

The COVID-19 pandemic has plunged us all into a state of uncertainty. In a rapidly changing situation where it is hard to know what will happen next, making decisions can be difficult. Researchers at the University of Cambridge and University College London created a simplistic model of this uncertain situation in the lab, to understand how our brain responds.

They found that when situations seem stable, we tend to rely on our on previous experiences to help us anticipate what will happen in the future. But when the world is volatile, our brain can let go of these expectations and allow rapid learning. The balance between the two approaches is moderated by the brain chemical noradrenaline. The study is published today in the journal Current Biology.

“Adapting to uncertain situations helps us to survive. When something unexpected happens, we have to decide whether it’s a one-off and ignore it, or whether it’s going to keep happening—in which case we might benefit by doing things differently,” said Dr. Rebecca Lawson, a researcher in the University of Cambridge’s Department of Psychology and lead author of the study.

The study tested the effects of Propranolol—a drug used to reduce anxiety and blood pressure—on how people responded to stable situations and to changeable ones. Propranolol blocks the action of noradrenaline.

Participants in the experiment—who were not suffering with anxiety—heard a sound and were then shown an image of either a house of a face. They quickly learned to predict the image they would see depending on the sound they heard before it appeared. The association between particular sounds and images was then changed at random intervals, increasing uncertainty and requiring participants to quickly learn new associations.

The reaction times of participants who received a placebo drug slowed down as the associations became more unexpected. Those who received Propranolol relied on the sound to a greater extent when uncertainty was high. This suggests that the drug makes people more likely to rely on their expectations, based on prior experience, in the face of uncertainty—which could be how it works to reduce feelings of anxiety.

Using a computational model, the researchers showed that the Propranolol group were slower than the placebo group at learning to use new information to adjust their expectations of what might come next, when a situation is very uncertain.

“We found that a brain chemical called noradrenaline plays a role in our inability to predict the future when the state of the world is volatile,” said Lawson.

When a situation is stable—represented in the experiment by a fixed link between sounds and images—our past experiences can be relied upon as a good guide to what will happen next. But when a situation is changing, we need to be more receptive to new information to try and work out what is happening and how to respond.

“In the face of uncertainty, people taking the anti-anxiety drug Propranolol showed an increased reliance on past experience to inform their behaviour—they were less influenced by changes in their environment that contradicted that experience,” said Lawson.