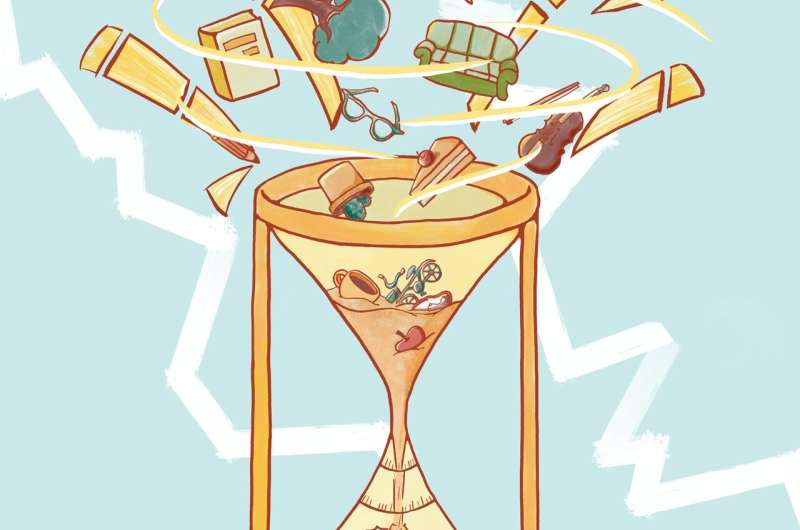 Young children sometimes believe that the moon is following them, or that they can reach out and touch it. It appears to be much closer than is proportional to its true distance. As we move about our daily lives, we tend to think that we navigate space in a linear way. But Salk scientists have discovered that time spent exploring an environment causes neural representations to grow in surprising ways.

The findings, published in Nature Neuroscience on December 29, 2022, show that neurons in the hippocampus essential for spatial navigation, memory, and planning represent space in a manner that conforms to a nonlinear hyperbolic geometry—a three-dimensional expanse that grows outward exponentially. (In other words, it’s shaped like the interior of an expanding hourglass.) The researchers also found that the size of that space grows with time spent in a place. And the size is increasing in a logarithmic fashion that matches the maximal possible increase in information being processed by the brain.

This discovery provides valuable methods for analyzing data on neurocognitive disorders involving learning and memory, such as Alzheimer’s disease.

“Our study demonstrates that the brain does not always act in a linear manner. Instead, neural networks function along an expanding curve, which can be analyzed and understood using hyperbolic geometry and information theory,” says Salk Professor Tatyana Sharpee, holder of the Edwin K. Hunter Chair, who led the study. “It is exciting to see that neural responses in this area of the brain formed a map that expanded with experience based on the amount of time devoted in a given place. The effect even held for miniscule deviations in time when animal ran more slowly or faster through the environment.”

In the current study, the scientists found that hyperbolic geometry guides neural responses as well. Hyperbolic maps of sensory molecules and events are perceived with hyperbolic neural maps. The space representations dynamically expanded in correlation with the amount of time the rat spent exploring each environment. And, when a rat moved more slowly through an environment, it gained more information about the space, which caused the neural representations to grow even more.

“The findings provide a novel perspective on how neural representations can be altered with experience,” says Huanqiu Zhang, a graduate student in Sharpee’s lab. “The geometric principles identified in our study can also guide future endeavors in understanding neural activity in various brain systems.”

“You would think that hyperbolic geometry only applies on a cosmic scale, but that is not true,” says Sharpee. “Our brains work much slower than the speed of light, which could be a reason that hyperbolic effects are observed on graspable spaces instead of astronomical ones. Next, we would like to learn more about how these dynamic hyperbolic representations in the brain grow, interact, and communicate with one another.”

Other authors include P. Dylan Rich of Princeton University and Albert K. Lee of the Janelia Research Campus at the Howard Hughes Medical Institute.