Sydney and Melbourne are the two cities outside Asia with the most airline travellers arriving from Chinese cities with the highest risk of the coronavirus outbreak.

Research published in WorldPop shows 207,400 passengers from 18 high-risk cities in mainland China would arrive in Sydney in the three months from mid January to mid April.

Melbourne would receive 154,500 over the same timeframe, which represented the 15 days before and the two and a half months after Lunar New Year's Day. 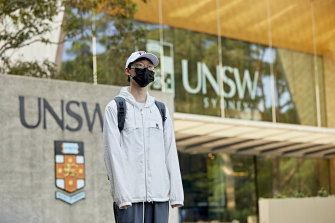 WorldPop, an open-access population mapping project, first analysed the areas within China most at risk of the novel coronavirus epidemic, based on internal travel within mainland China over Lunar New Year.

The researchers then analysed the international cities – including the non-mainland Chinese cities of Hong Kong, Taipei and Macau – that would receive the most airline passengers from those at-risk cities, based on the visitor patterns of previous years.

Sydney was ranked 12th in a list of international cities expected to receive the most number of airline passengers from those high-risk Chinese cities, while Melbourne was ranked 14th.

But Sydney and Melbourne were more at risk than any other Western cities, ahead of Los Angeles, New York, London, Paris and Frankfurt.

Bangkok and Hong Kong were most at risk outside mainland China, anticipated to receive more than a million visitors from high-risk cities in mainland China over the three months.

The Australian cities were also considered safer than a number of other Asian cities, including Bangkok, Seoul, Tokyo, Singapore and Kuala Lumpur.

The university sector is bracing for an influx of students returning from China, with Monash University in Melbourne taking the unusual step of delaying the start of the academic year and holding online classes for the first week. Students would return to campus in mid-March.

Other Australian universities have not altered teaching plans but will provide flexibility for students who need to go into quarantine.

Monash student Veronica Smith said the delayed start to the year would seriously impact students because the university planned to shorten the study vacation period before exams from 10 days to three days.

"I absolutely hate it, and the fact that students or the [students association] were not consulted is appalling," Ms Smith said.

The University of NSW has less leeway to provide a quarantine period for returning students because of its three-term academic year. Orientation week at UNSW is scheduled for the week of February 11, with teaching to start on February 18.

UNSW professor Bill Rawlinson said the university had other options such as providing face masks through the medical service on campus.

"This happens every year in the sense that the northern hemisphere has influenza epidemics every year, so the returning students come out of an influenza epidemic zone right in the middle of winter," he said. "It's not like it's brand new and a lot of our existing processes are in place."

A number of Asian-Australians have taken to social media to call out racist incidents in the wake of mounting alarm over coronavirus and there has been a spike of coronavirus content on TikTok, much of it satirical or humorous.

Sydney commuters with East Asian heritage who spoke to The Sun-Herald last week said they had not encountered any racism so far. Many were wearing face masks on public transport as a precaution.