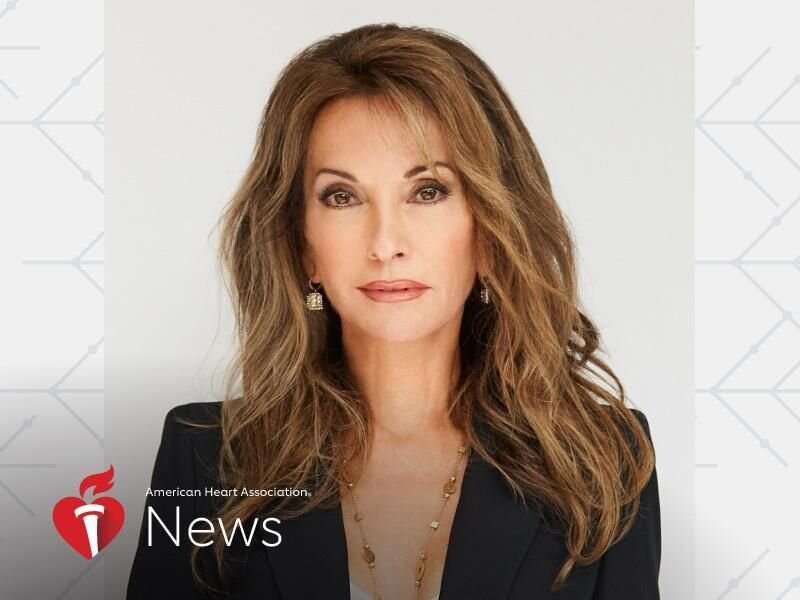 After years of advocating for women’s heart health, Susan Lucci wasn’t taking her own advice.

One night in January, discomfort was radiating around her rib cage. She was short of breath. Something definitely wasn’t right.

But it was late in the evening, and she didn’t want to bother her doctor. At first, she didn’t even tell her husband. She went to bed.

“I was just going to let it all go,” Lucci said. “Then I felt a sharp pain in the left side of my jaw. I had read that can be a symptom for women having a heart event as well. It really kind of woke me up.”

Urged by her husband, she finally called her cardiologist at home. He didn’t hesitate.

By morning, the soap opera legend America loved to hate for 41 years on “All My Children” had a stent implanted in a coronary artery that was 80% blocked, potentially avoiding a serious heart attack.

“You can never really tell how quickly it could have happened, but certainly within a year,” said Dr. Richard Shlofmitz, chairman of cardiology at St. Francis Hospital in Roslyn, New York. He diagnosed the problem and performed the procedure. “It’s like if you have a log in a river and some twigs get attached. It just builds up.”

If this sounds a little familiar, it should. A little over three years ago, the actress had her first cardiovascular episode, when doctors discovered that two other arteries were blocked, one 90% and the other 75%.

Fit, healthy and careful about her diet, Lucci had ignored mounting symptoms for a couple of weeks until crushing chest pain finally sent her to the hospital. Two stents—small wire mesh tubes that widen clogged arteries and ensure adequate blood flow to the heart—quickly fixed the problem, and probably saved her life.

“Life returned to normal very quickly,” said the 75-year-old actress who lives on New York’s Long Island. “I was on stage two days after I was discharged, and life continued to be wonderful.”

Grateful and newly aware of the cardiovascular dangers women face, she added another component to an already busy life: using her celebrity to spread the message.

She gave interviews about her experience, became an ambassador for the American Heart Association’s Go Red for Women campaign, and joined other volunteers and survivors to lobby for health issues on Capitol Hill.

“My mission is to tell women my story,” Lucci said. She hopes that convinces women “to listen to whatever is going on with their bodies, to take action, and to put themselves on their to-do list and give themselves permission to take care of themselves.”

But on that night a month ago, her own message wasn’t getting through.

“It’s like I had not seemed to learn anything from my first time around,” she said. “I really didn’t think it was going to be anything. … I was just about to make a terrible mistake.”

It was something, but it was something different. The blockages in 2018 were caused by calcium deposits, which Lucci attributes to family genetics. The latest problem, she said, was artery-clogging cholesterol.

“I frankly have no one to blame but myself,” she said. A longtime advocate of healthy eating, she joked that she basically lived on “salmon, blueberries and kale.” Then came the isolation and anxiety of the COVID-19 pandemic.

“I got off my regimen and I was eating comfort food, pasta and ice cream,” she said. “My husband was cooking, and I was eating. I felt I was OK. Then the COVID restrictions went away and the holidays came, and I didn’t go back to my clean way of eating. I thought I was fine, but that was just tempting fate.”

As was the case the first time, the stent made an immediate difference. Lucci was out of the hospital the same day, back to her exercise regimen—she’s been a Pilates enthusiast for decades—and a heart-healthy diet.

“She’s as good as new,” Shlofmitz said. “She’s on cholesterol medications, her heart looks perfect, and her prognosis is excellent.”

Lucci’s mission to promote awareness is unchanged. Among U.S. women, cardiovascular disease accounts for one-third of all deaths, more than all cancers combined.

“Women are wearing many hats,” Shlofmitz said. “It’s not uncommon for them to put themselves last and think maybe those symptoms will just go away. But it’s better to have nothing and check it out than have something and not check it out.”

As passionate as she is about the subject, Lucci initially didn’t want her latest episode to be part of the story.