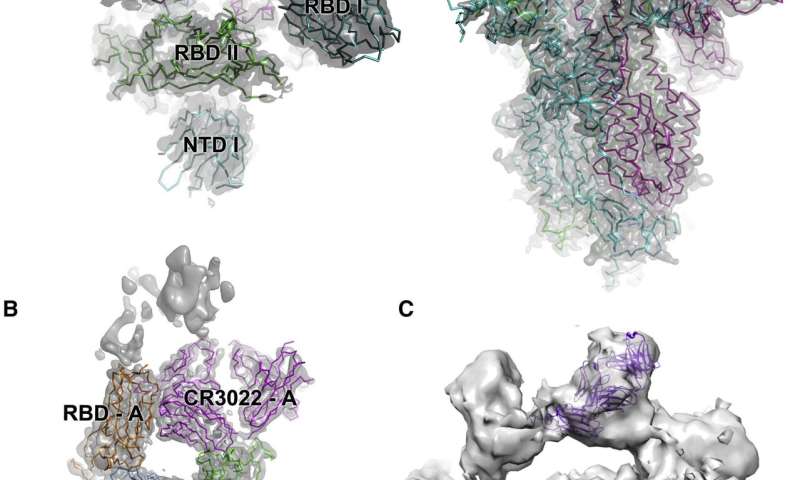 New research suggests targeting the spike proteins could provide an effective treatment for SARS-CoV-2(COVID-19) and provide valuable structural data for teams working to develop vaccines against it.

As part of the massive global scientific effort underway to find treatments or vaccines for SARS-CoV-2, the UK’s synchrotron, Diamond Light Source is providing priority rapid access for groups investigating SARS-CoV-2 proteins. One of these teams has just published results that show that the SARS antibody CR3022 also neutralizes SARS-CoV-2, by destroying the prominent spike proteins. Their work suggests that this antibody may have therapeutic potential alone or in combination with other antibodies. Their high-resolution data will also provide valuable structural data for teams working to develop vaccines against SARS-CoV-2.

The spikes on SARS-CoV-2 serve two functions during the infection process. Firstly, it locks on to a human cell, like two interlocking jigsaw puzzle pieces. Secondly, the spike then undergoes a significant shape change, merging the outer membranes of the cell and the virus. The genetic material from the virus is then easily transferred to the human cell, where it can reproduce.

If the human immune system can produce antibodies that bind to the virus at the point at which it would bind to a human cell, they can neutralize it. An antibody that works in this way is called a receptor blocking antibody. It was previously thought that this would be the only way to neutralize the virus using antibodies.

“This new research demonstrates that CR3022 works in an entirely different way,” explains one of the authors, Prof. Dave Stuart, Director of Life Sciences at Diamond and Head of Structural Biology at the Department of Clinical Medicine at the University of Oxford. “Using the high-resolution Cryo-electron microscopes at eBIC, the team were able to watch the antibodies in action against the virus and to determine their method of attack. It destabilizes the spike protein entirely, neutralizing the virus. CR3022 is, therefore, a synergistic antibody, which could work on its own, or in tandem with receptor blocking antibodies.”

He continues, “This finding is particularly important in this antibody jigsaw puzzle because the most common way to screen antibodies for effectiveness against SARS-CoV-2 doesn’t check for this alternative method of attack. Further screening could identify more useful antibodies that had previously been classed as ineffective. These results could lead to antibodies that can be used to treat SARS-CoV-2. As human antibodies arise within the body, they are relatively safe. Drug companies can replicate antibodies quickly in the quantities that would be needed.”

He adds that one of the ways in which viruses evade the immune system is to mutate so that antibodies no longer work. However, the spike protein plays such an essential role for SARS-CoV-2 that it would be difficult to mutate. This makes it an excellent target for treatments and vaccines. The research team also used Diamond’s beamline I03 to carry out macromolecular crystallography (MX) scans of the spike protein.