The new high-resolution three-dimensional microscopy technique of Immunofluorescent Array Tomography has been used successfully to study the diversity of intracellular structures known as organelles. Through this efficient imaging technique, researchers have been able to gain insight into how organelle activity plays a role in various pathologies and diseases. 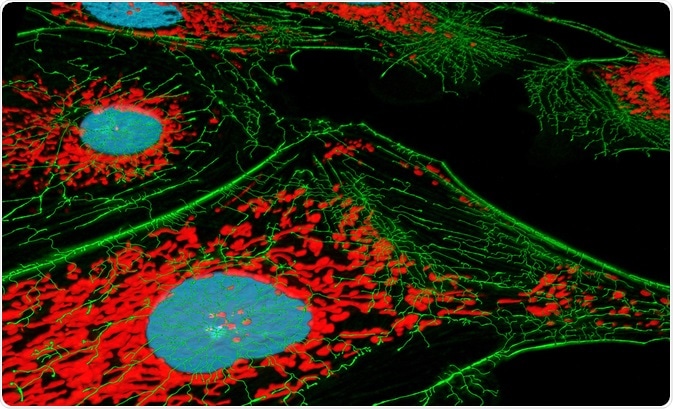 What is an organelle?

Organelles are key structures of interest because they exist within cells to perform specific functions. Organelles are enclosed within a cell's intracellular membrane. Examples of organelles that exist in human cells are mitochondria, ribosomes, the endoplasmic reticulum, and the nucleus. In some cases, the primary cilium is also considered a core organelle since it is a component in most cells.

Chloroplasts that conduct photosynthesis, storage granules like those that make insulin in the pancreas, and microvilli that are found on the outside surface of the cell for the purpose of increasing surface area are all specialized organelles.

The workings of organelles can tell us a lot about the organism in which they inhabit. While all human cells contain the same sort of building blocks, the diversity between cell types is huge. There are estimated to be around 200 different cell types in the human body alone.

Understanding the function and behavior of them better allows us to see how they are specialized, and how they impact on the workings of the human body, which can be fundamental in the etiology of disease.

Cell diversity does not only exist between cell types but also between individual cells. Again, the study of how cells differ in this case can provide us with important markers of disease. Mitochondria have proven a key area of study in that they can provide information on an organelle's diversity.

Mitochondria, along with other organelles, can be studied to gain an insight on factors such as homeostasis, signal conduction, immunity, and metabolism.

In looking at the diversity of structures, scientists have a way to understand the diseases that are associated with their abnormal expression. In addition, studying their behavior can be key to the development of new drug treatments.

With significant progress being made in recent years in sub-cellular imaging through the development of organelle-targeted fluorescent probes, the physiological and pathological functions of organelles have been revealed in much greater detail.

Organelles are highly reactive and, therefore, are effectively targeted through sub-cellular localization fluorescent tools, which have proven to be invaluable in studying organelle diversity and its related implications in pathology and disease.

Array tomography is a recently developed method of high-resolution three-dimensional microscopy. It works by imaging two-dimensional arrays of ultra-thin specimen sections on solid substrates. The method was developed initially for applications in neuroscience, allowing for immunofluorescence imaging of the samples, resulting in images of high resolution and reliability.

The method of immunofluorescence alongside the array tomography technique allows for the clear visualization of organelles within cells, as well as the 3D reconstruction of the position of the fluorophores within the cells. The technique uses fluorophores to produce signals at the presence of various cellular antigens and proteins.

When exposed to a specific wavelength of light, the fluorophore compound emits its own light, which is then measured in order to produce the images of the structures within the tissue sample. Either a fluorescent microscope or a confocal microscope is used to view the proteins or antigens that have been targeted with the method.

This method has already become firmly established in clinical and research applications; notably, it has been invaluable in studying organelle diversity. Due to its ease of providing imagery of proteins and antigens within cellular structures, the method lends itself to the study of intracellular organelles.

This means that the deeper within a sample researchers attempt to gain images of, the lower the resolution of the image will be, making it difficult to make quantitative comparisons of organelles at different depths.

Researchers have been able to learn much about organelle diversity through Immunofluorescent Array Tomography, which has lead to the advancement in knowledge of various pathologies and diseases.

The method has been used to understand changes occurring in the brain, locating specific proteins and other key neural markers. In addition, mitochondria have been a keen area of focus, their mechanisms have been found to be essential in the process of protein transfer across membranes, deviation of which from the normal is linked with numerous diseases.

The imaging technology has been able to elucidate diversity in the workings of mitochondria across different populations, highlighting how protein transfer systems contribute to disease, highlighting new avenues for exploration in the development of new treatments.

In the same line of research, the proteins themselves that cross the membranes have become a significant area of research in relation to various diseases. Further to this, the study of organelle diversity has also been used to understand more about the plasma membrane in Alzheimer's disease.

The method of Immunofluorescent Array Tomography is still fairly new. However, it has already proven invaluable to the field of organelle diversity study, which has to lead to a greater understanding of pathologies and diseases. As the technology develops further and overcomes limitations that reduce its quantitative capacities, we should see it becoming even more fundamental to the study of these intracellular structures.