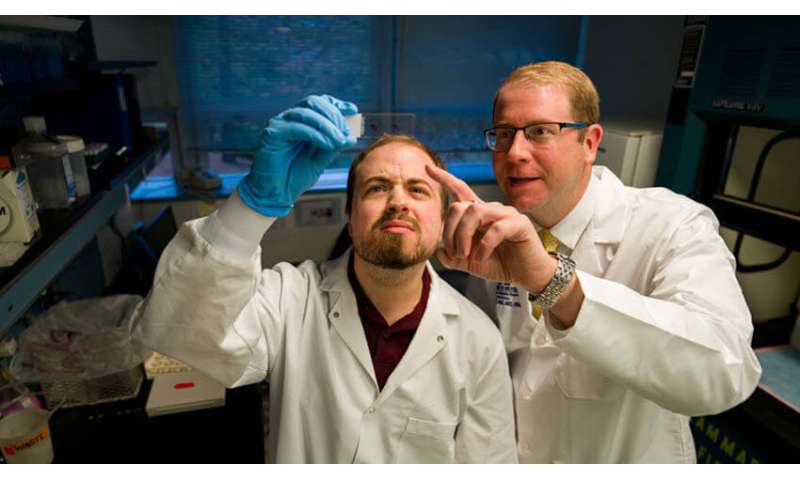 Many modern cancer drugs target a specific genetic mutation that is driving a particular cancer’s runaway growth and division—such as the HER-2 protein in some breast cancers or EGFR in certain lung cancers.

But this strategy hasn’t worked well against glioblastoma, an aggressive form of brain cancer, which is known for having multiple mutations that differ from region to region and cell to cell within a single tumor.

Now research led by the University of Michigan Rogel Cancer Center has hit upon a new approach: Make radiation therapy more effective for glioblastoma patients by targeting a critical metabolic pathway and disrupting its ability to repair the DNA damage caused by the radiation.

As it turns out, the Food and Drug Administration has already approved a drug that can inhibit this pathway, which makes biological building blocks known as purines. Starting with an existing drug lowers the barriers to launch a clinical trial to test the strategy’s effectiveness in glioblastoma patients, the researchers note. The team’s findings appear in Nature Communications.

“Radiation therapy is a key treatment for nearly every patient with glioblastoma, and resistance to radiation leads to a recurrence of the cancer. So, finding new ways to overcome this resistance could help improve outcomes for many patients,” says senior study author Daniel Wahl, M.D, Ph.D., a radiation oncologist and researcher at Michigan Medicine. “And because of the variety of genetic alterations seen in glioblastoma, we wanted to find a way to overcome this resistance that would work across genotypes.”

New treatments for glioblastoma are sorely needed. Fewer than 5% of glioblastoma patients live more than five years after being diagnosed, and recurrence after a first round of treatment is almost inevitable.

Wahl and co-author Yoshie Umemura, M.D., an assistant professor of neurology, are launching a research study in human patients based on the team’s research, which will start enrolling patients soon.

Why are some cells resistant to radiation?

“What’s the relationship between glioblastoma metabolism and resistance to radiation therapy?—that’s the central question we started with,” Wahl says. “Our measurements allowed us to ask which metabolites correlate with radiation resistance? That is, if cells live after radiation treatment, do they have more of any particular metabolites?”

They began by examining the characteristics of 23 glioblastoma cell lines, Wahl explains, looking at the metabolites produced by each cell line and measuring how resistant each was to radiation.

The group found that the cell lines that were more resistant to radiation treatment also had higher levels of purines—biological compounds that are known as the building blocks of DNA and RNA, and that can also activate signaling pathways.

“This was very exciting because lots of different genetic mutations that occur in glioblastoma lead to this purine pathway being activated,” Wahl says.

This suggested that they might be able to target the downstream effect of multiple genetic mutations.

“We hypothesized that targeting this metabolic activity might work across tumor cells with different types of mutations—instead of just whatever fraction of cells has that one particular genetic aberration you might go after with a mutation-targeting therapy.”

Once the researchers discovered the correlation between high levels of purines and radiation resistance, they set out to demonstrate whether the metabolic changes actually caused the radiation to be less effective.

Moving from the lab toward the clinic

To better understand whether targeting purine metabolism might help overcome resistance to radiation therapy in patients, the team used mouse models of glioblastoma with tumors grown from human patients’ cells.

They gave the mice a drug called mycophenolate mofetil, or MMF, which blocks purine biosynthesis and which has been approved for the treatment of organ transplant rejection since 2000.

Tumor growth was moderately slowed down in mice who received radiation therapy alone or MMF alone, but almost totally halted in the mice who received both, Wahl explains. The benefits of MMF were similar whether animal tumors were grown in the brains of the mice or elsewhere in their bodies, demonstrating the drug’s ability to effectively penetrate the blood-brain barrier—which is critical for treating brain cancer patients.

“Since the FDA has already found the drug to be safe enough to use in patients for one purpose, it makes it easier to set up a clinical trial aimed at a second disease,” he says.

Ultimately, Wahl adds, the research was made possible by the collaborative, multidisciplinary environment at U-M—where clinicians and researchers with expertise in glioblastoma can team up with others who specialize in cancer metabolism, data modeling and launching new clinical trials.