A recent study by researchers from the United Kingdom (UK) revealed that antibody levels associated with protection against reinfection with the severe acute respiratory syndrome coronavirus 2 (SARS-CoV-2) are likely to last from 1.5 to 2 years on average and that the protection from severe infection may be present for several years. The paper is currently available on the bioRxiv* preprint server while it undergoes peer review. 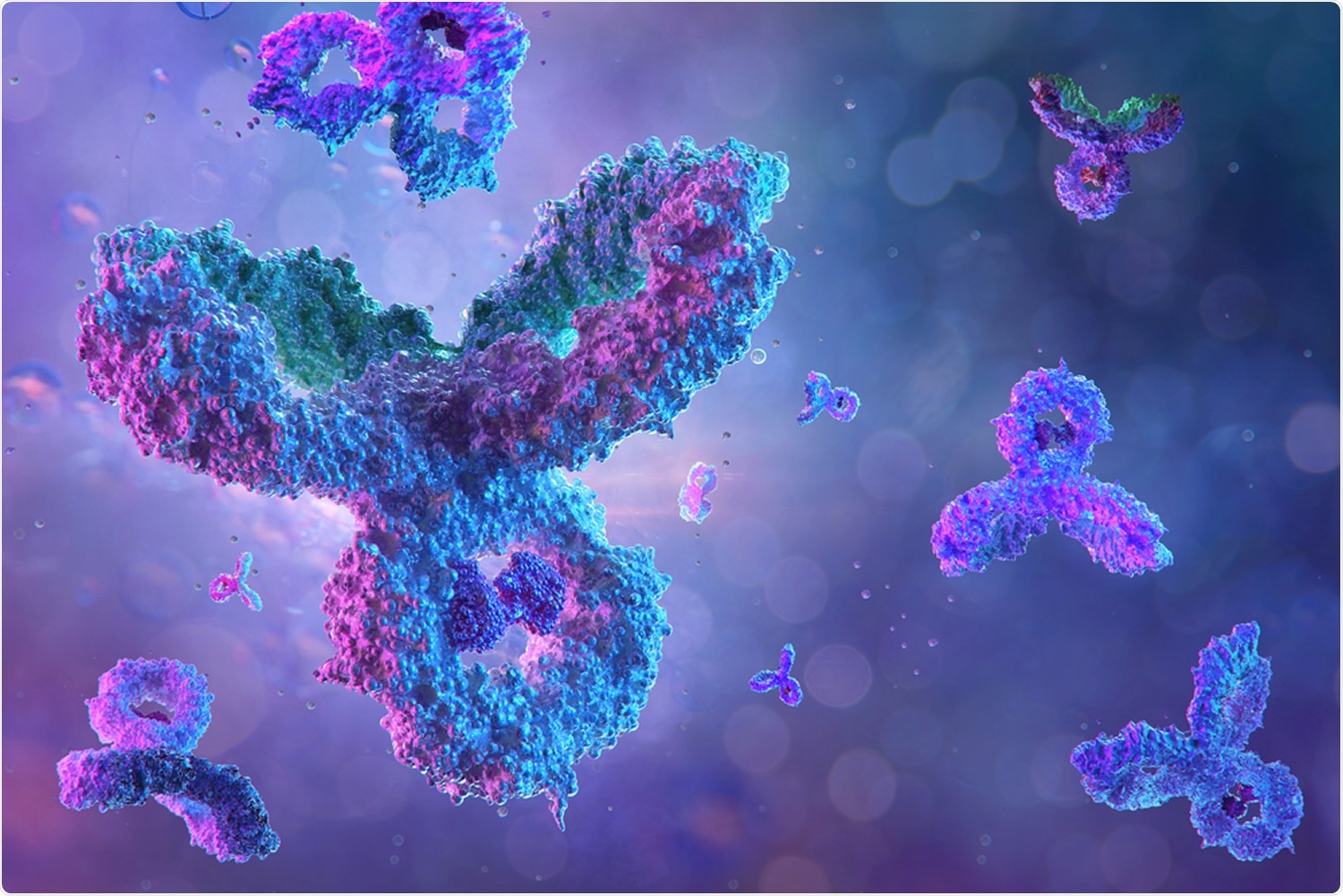 Since the start of the coronavirus disease 2019 (COVID-19) pandemic, the duration of post-infection immunity was one of the most important discussion points, as this has direct implications on the vaccination policy and the future course of this global disease.

The disease severity correlates with subsequent development of protective immunity; however, among those who do seroconvert, there is a substantial variation in the duration and trajectory of antibody responses to different SARS-CoV-2 antigens. This partly reflects assay-dependent differences, but also variability in the populations and disease groups investigated.

Current estimates for the half-life of Immunoglobulin G (IgG) antibodies against the spike glycoprotein of SARS-CoV-2 (which are associated with potent neutralizing activity) vary from 36 to 244 days. This is directly comparable to anti-nucleocapsid IgG half-lives that have been estimated between 35 and 85 days.

In this new study, a research group led by Dr. David Eyre from the University of Oxford decided to utilize a much bigger dataset from a representative national UK survey in order to determine predictors of seroconversion and to investigate the duration of antibody responses.

Seroconversion predictors and the duration of protection

For the purposes of this study, the researchers have used the Office for National Statistics (ONS) COVID-19 Infection Survey (CIS), which is an extensive community-based survey that is highly representative of the UK’s general population. There were 7,256 survey participants in total with positive SARS-CoV-2 PCR test between 26th of April, 2020 and 14th of June, 2021.

Alongside appraising the predictors of seroconversion after SARS-CoV-2 infection, the researchers aimed to pinpoint specific anti-spike IgG antibody trajectories and investigate the peak and duration of IgG antibody responses. Antibody levels were appraised with the use of ELISA detecting anti-trimeric spike IgG assay developed by the University of Oxford.

Moreover, they were particularly interested in the impact of demographic factors, self-reported symptoms on post-infection antibody responses, as well as cycle threshold (Ct) values in the PCR test that are inversely related to viral load. Special Bayesian linear mixed models were used for data analysis. 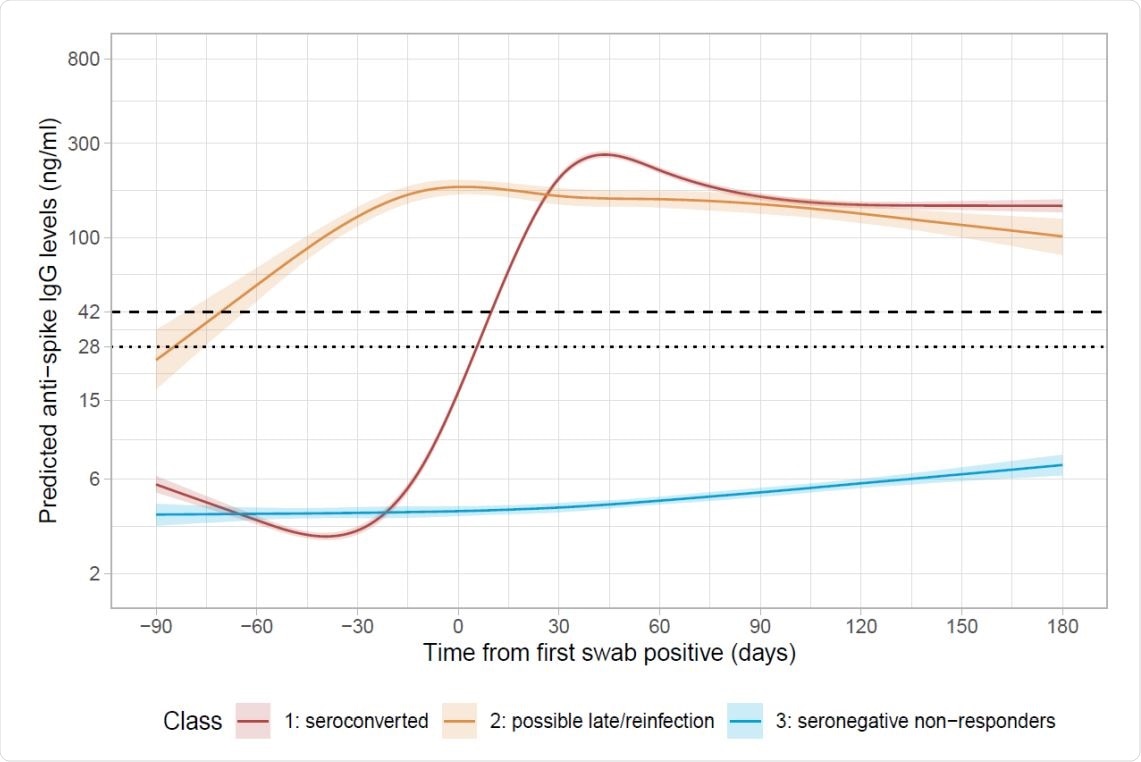 Predicted anti-spike IgG trajectories in participants with natural SARS-CoV-2 infection from latent class mixed models in 7,256 participants (with standard error of the prediction). Black dashed line indicates the assay threshold for IgG positivity (42 ng/ml) and the dotted line at 28 ng/ml (indicates level associated with 50% protection against reinfection). The 95% confidence interval are calculated by a Monte Carlo approximation of the posterior distribution of the predicted values. Restricted natural cubic splines (internal knots at -10,30,60 days, and boundary knots at -60 and 140 days) were used to model time (see methods)

In short, the researchers have found that 24% of study subjects did not seroconvert after having a positive PCR test – including 34% of participants that had robust evidence for a true positive result (Ct less than 32, with more than two genes detected). Hence, non-responders are likely a combination of both genuine non-responders and false-positive test results.

“We found no evidence of an independent effect of long-term health conditions on non-response, possibly reflecting the heterogeneity of this group including those with a range of cardiovascular and metabolic conditions not typically associated with impaired humoral immunity, as well as conditions more directly impacting antibody production (e.g., hypogammaglobulinemia)”, explain study authors.

Estimated mean trajectory of anti-spike IgG antibody levels and individual trajectories in 3,271 participants in Class 1. The timing of the peak level 56 days after the first positive swab is determined from the latent class mixed model. The posterior mean and 95% credibility interval are shown with the black line and red shaded area. Black dashed line indicates the assay threshold for IgG positivity (42 ng/ml) and the dotted line at 28 ng/ml indicates level associated with 50% protection against reinfection

In any case, an estimated half-life of IgG antibodies against SARS-CoV-2 glycoprotein was estimated to be 184 days, which indicates a sustained antibody response against that infection. This period was longer in women, as well as in individuals of white ethnicity.

Furthermore, among study participants who seroconverted, IgG antibodies against spike glycoprotein remained above the positivity threshold much longer in older age groups (e.g., between 347 and 502 days for 20-year-olds, but from 400 to 571 days for 80-year-olds). However, akin to previous studies of humoral immunity, older age was linked to lower seroconversion rates.

In conclusion, this representative study of infected individuals from the general population in the UK demonstrates that approximately 1 in 4 people did not develop IgG antibodies against SARS-CoV-2 spike glycoprotein after positive-PCR test results in regular screening.

Naturally, this study has certain limitations, such as the use of a single assay to measure anti-spike IgG antibodies. Similarly, the researchers were not able to model antibody trajectories from each participant’s maximum levels since antibody data has been collected on a monthly basis.

Nonetheless, provided estimates on the durability of natural immunity may aid significantly in future planning of vaccination strategies. There are still open questions that have to be addressed by further research, such as the extent to which waning antibody levels influence immunity and protection, as well as the risk of infection in seronegative non-responders.