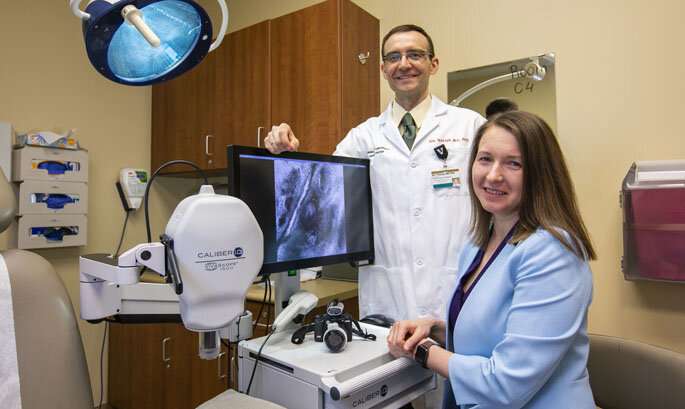 In a new study from Vanderbilt University Medical Center, 10-second videos of white blood cell motion in the skin’s microvasculature greatly improved the prediction of which stem cell and bone marrow transplant patients would have a relapse of their blood cancer.

In the typical immune response, white blood cells are seen to interact with the inner walls of veins, rolling along them like bowling balls before adhering to them, then exiting through them to go to sites of inflammation.

Transplant patients whose white blood cells were caught on video with greater adherence levels and greater rolling along vessel walls were more than three times as likely to have cancer relapse or die, compared to those with normal adherence and rolling levels.

The stark finding, much more predictive than established models of blood cancer relapse and death, was reported March 26 in JAMA Dermatology and presented the same day in Boston at the annual meeting of the American Academy of Dermatology.

In a previous study involving noninvasive microscopy and graft-versus-host disease, the researchers stumbled on what appeared to be an association between higher white blood cell activity and cancer relapse.

“When we were able to turn our focus to this activity and measure it carefully in this new study, we found the association to be indeed striking,” said Inga Saknite, Ph.D., adjoint assistant professor of Dermatology, who gave the presentation in Boston. Saknite led the study with Eric Tkaczyk, MD, Ph.D., assistant professor of Dermatology and Biomedical Engineering, director of the Vanderbilt Dermatology Translational Research Clinic and staff dermatologist at Nashville VA Medical Center.

According to their report, the clinical value of using videomicroscopy to noninvasively view white blood cell activity in patients’ blood vessels has been unexplored until now.

“Our study raises the prospect of a new application of so-called diagnostic optical biopsy,” Tkaczyk said, “with a special confocal microscope brought to stem cell and bone marrow transplant patients for non-invasive inspection of their skin right at the bedside. While this is a pilot study of just over 50 patients, it would appear to point strongly to potential clinical application for improved patient evaluation and management. Patients found to be at high risk for relapse could, for example, be more readily referred to clinical trials.”

In 56 blood cancer patients who had undergone allogeneic transplants, the team used confocal videomicroscopy to record white blood cell activity in the skin’s microvasculature at 34 to 58 days after transplant. With a clinically meaningful threshold having been selected for high and low rates of adhering or rolling, or A&R, of white blood cells in the microvasculature, the study group was divided into 35 participants (62%) with low A&R and 21 (38%) with high A&R.

Participants were followed via review of electronic health records for a median of 15 months after transplant, during which 13 relapsed and 14 died. Among the 13 relapses, nine had high A&R, with eight of the nine relapses occurring within four months of imaging.

A&R vastly outperformed an established predictive model of cancer relapse or death following bone marrow transplant, called the refined Disease Risk Index, such that when the two models were combined, A&R accounted for over 80% of the prognostic information for relapse and death.