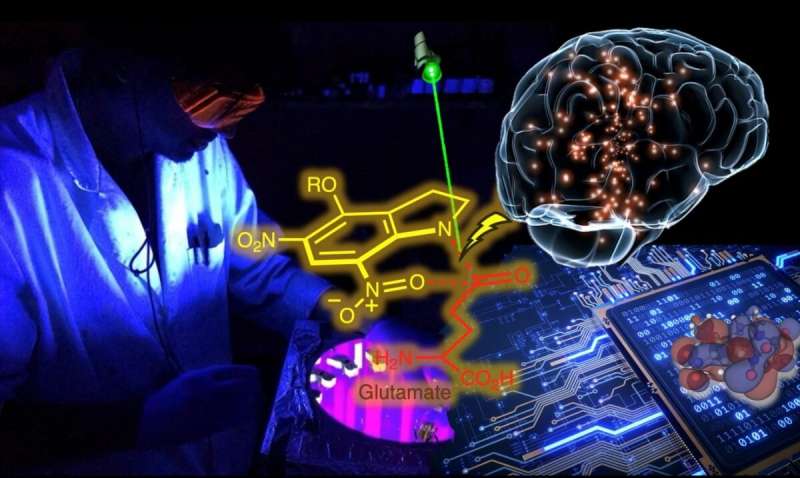 Human brains have an average of 86 billion neurons. These nerve cells are interconnected at junctions known as synapses, and some neurons have as many as 10,000 such synapses. A key to understanding brain function is to have a better grasp of how this non-logical arrangement of complex neurons leads to specific behaviors and cognitive function, including memory storage.

Recent advances that combined chemical applications with neurobiological techniques enabled the use of light as a trigger to turn on specific neurons by activating selected synapses. Chemical groups that effectively leashed active molecules like glutamate (a key molecule in learning and memory) helped control nerve signals by keeping them in an off state. On-demand, targeted light can unleash the active molecules that lead to turning on neurons, and thus pathways of interest. The key to the success of this procedure is intricately dependent on the efficacy of light at breaking molecular bonds.

Previously, there was little known on the precise mechanism by which light can induce the unleashing of certain class of molecules referred to as NitroIndolinyl (NI), which represent some of the most efficient light-responsive molecules.

The research groups of Nasri Nesnas and Roberto Peverati at Florida Tech have now been able to conduct accurate computational studies that revealed important details of how bonds break to release active molecules. This is extremely valuable to enable future designs of other molecules that can modulate brain signals. This broader understanding of light’s ability to induce this type of chemical bond cleavage will lead to building systems that are far more sensitive to light, requiring smaller amounts of such agents and thereby minimizing any interference with other, neighboring neurons.

The collaborative study was recently published in Scientific Reports.

Florida Tech’s Pierpaolo Morgante, first author of the paper, was excited to learn that there are two pathways by which such process can occur. “I was surprised when I saw that there was some confusion in previous literature about this pathway, and I became interested in really understanding these mechanisms. I found out something really unusual.”

Peverati, who is one of the developers of the reliable computational methodology that is at the heart of these new results, added: “Our method and its associated software have the ability to reliably predict the energies of the molecules that are involved in this pathway by simulating the behavior of every single electron contained in them. Our program has allowed us to clarify a mechanism that was the source of much debate in the specialized literature. The predictions obtained from our software match the results of Dr. Nesnas’s experiments, which further validate the reliability of our approach. These results give us confidence that we can use this computer software to predict new molecules that are more responsive to light that can be used to study neurons.”

Nesnas, whose group prepares these compounds, was pleased with the outcome of the study.

“Light emerged in recent years as a powerful tool in neuroscience,” he said. “We noted that there was an unusual path that combined two well-known photochemical processes that have never been observed to occur simultaneously before, until this study. This is an exciting finding in the world of photochemistry.”