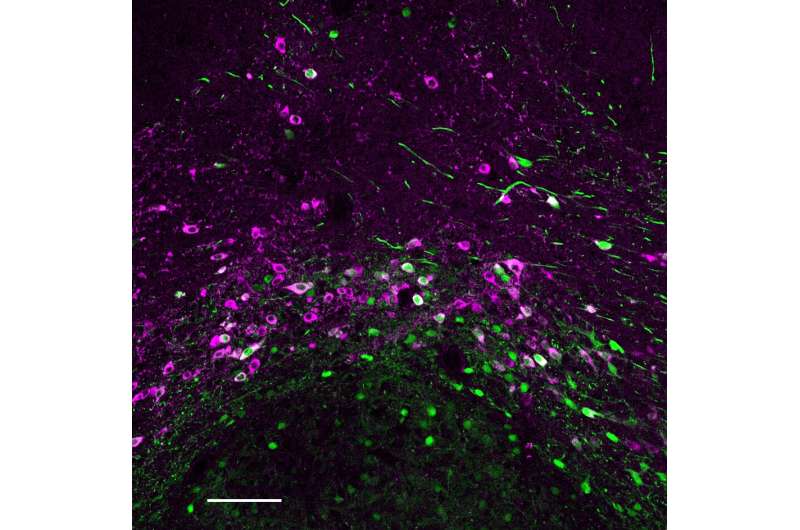 Cocaine is a highly addictive substance that, in the long term, can have adverse effects on health and wellbeing. There are around 18 million cocaine users globally, according to a U.N. report. Understanding how cocaine modifies brain networks could reveal potential targets for therapies to treat addiction and other neuropsychological disorders.

A new study published today in the journal Frontiers in Synaptic Neuroscience by a team of researchers from the University of Lausanne and the Wyss Center for Bio and Neuroengineering reveals that during cocaine withdrawal, neurons in a brain area associated with depression connect to neurons embedded in an anti-reward system.

When we receive a reward, neurons fire in the brain’s ventral tegmental area (VTA), a region of the brain that produces dopamine. Dopamine is a chemical messenger that creates feelings of joy or pleasure. It spreads throughout the brain, motivating us to repeat our actions and achieve the feeling of pleasure again, a central facet of addictive behavior. When we miss out on a reward, or stop taking an addictive drug, the lateral habenula—a brain area linked to depression—becomes hyperactive and sends signals to the VTA that results in depressive symptoms.

What researchers did not know until now is exactly where the neurons from the lateral habenula extend into the VTA and what they connect to during withdrawal from cocaine. Through a series of experiments, the team discovered that in mice, the neurons from the lateral habenula synapse mostly to neurons in the VTA that do not produce dopamine, creating a connection to an anti-reward system that may be key in driving adverse behavior.

Manuel Mameli, Ph.D., associate professor in the Department of Fundamental Neuroscience, University of Lausanne, said, “We wanted to understand why individuals experience depression when they stop taking a substance like cocaine. We knew that cocaine withdrawal induces changes to brain circuits linked to depression and reward, but our results have now taken us a step further and show that there is a reorganization of brain circuits that drive negative behavior.”

The team combined their expertise in sample preparation and advanced microscopy to capture 3D images of entire intact mouse brains. They used viral “tags” to make the neurons fluoresce, then created completely transparent samples by removing lipids, before imaging with the Wyss Center’s custom-built lightsheet microscope. With data analytics and visualization tools, they identified the 3D morphology of specific neurons to understand their anatomical distribution inside the brain.

Stephane Pages, Ph.D., scientific coordinator at the Wyss Center and senior research associate at the University of Geneva, said, “The beauty of lightsheet imaging is being able to see which neurons connect to each other in the brain. Our microscope and data analytics capabilities pinpointed the specific neuronal connections between the two major brain areas implicated in drug withdrawal.”