A student who spent more than 10 years living in agony may have found the answer to her prayers in an electrical device implanted in her spine.

Alice Fowle, 20, has been living with complex regional pain syndrome (CRPS) since she was just nine years old – although it wasn’t diagnosed until her mid-teens.

With excruciating pain spreading out of her right foot, Miss Fowle was sometimes left unable to walk or talk because of her condition.

She missed years of school lessons because of the mysterious disability, which is poorly understood but thought to be caused by malfunctioning nerves.

But now, thanks to a matchbox-sized gadget called a dorsal root ganglion stimulator, she is able to use technology to dampen the pain and get on with her life. 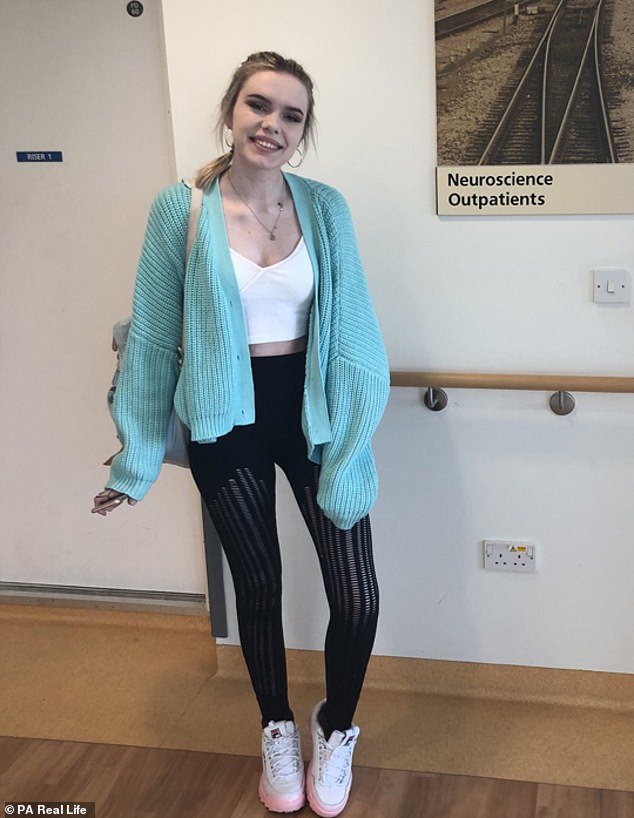 Alice Fowle, from High Wycombe, has suffered with chronic pain in her right foot since she was nine years old and recently had an operation to implant an electrical device to control her nerve signals

‘I’m still on a total high from the operation,’ Miss Fowle said.

‘Even though I am still in pain, it is such a liberating feeling for it to be manageable and not so all-consuming that I can hardly think of anything else.’

Miss Fowle, from High Wycombe in Buckinghamshire, had the operation on the NHS after years of suffering weren’t ended by physiotherapy or pain counselling.

She was still at primary school when she woke up one morning with a searing pain in her right foot – and it never went away.

Describing the pain as a ‘sharp burning sensation similar to lightning’ beneath the arch of her foot, it took five years before Miss Fowle would be diagnosed with CPRS.

The condition usually only affects one part of the body but it may spread, and it can be so severe even the feeling of clothing against skin can cause agony.

CPRS is more common in women and tends to start around the age of 50, but it can affect anyone – there are no reliable estimates of how many people have it.

‘I had spent years going to the doctors’, with them having no idea what was causing the pain that was ruining my life,’ Miss Fowle said.

‘I felt even more upset because there was nothing they could do and I couldn’t understand why my body was doing this to me.’ 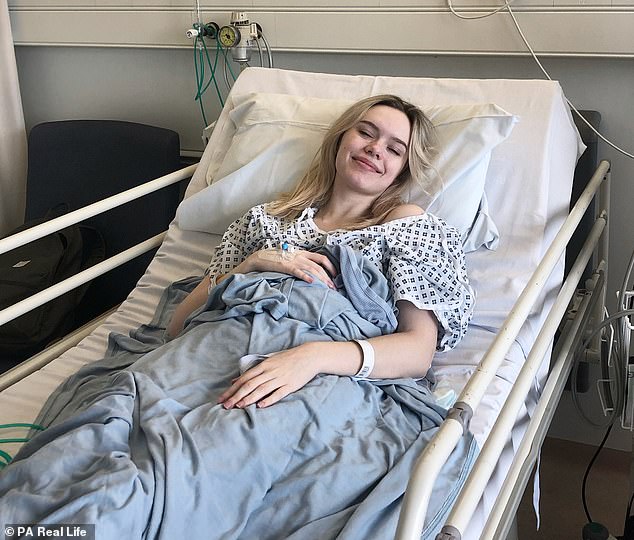 Miss Fowle, pictured in hospital in April when she had the surgery, said she was ‘astonished’ when doctors first told her she could have the device attached to her spine on the NHS 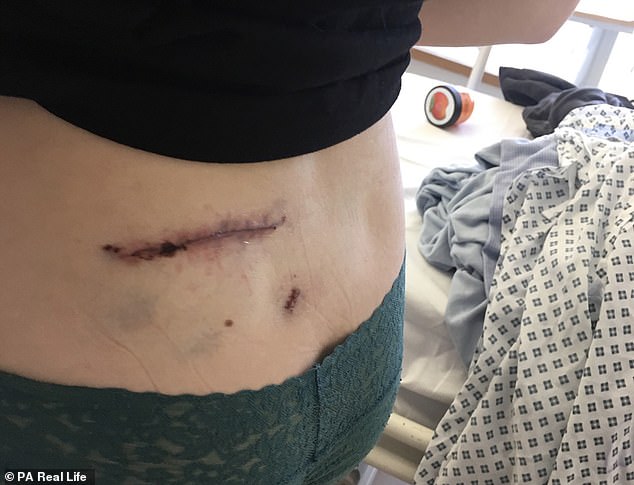 WHAT IS DORSAL ROOT GANGLION STIMULATION?

A dorsal root ganglion (DRG) is a bundle of nerves on the spine which control the sending of pain signals to the brain.

The DRG essentially acts as a traffic light, allowing pain signals through or not.

If this malfunctions, or allows through pain signals from another malfunctioning nerve, people may suffer from pain when they have no injury.

Using electrical currents from a stimulator attached to the nerves with electrodes can enable people to control the signals which are emitted from the DRG.

By stimulating the DRG pain signals could be blocked from making it through to the spine and up to the brain.

This would reduce or completely eliminate the amount of pain the patient feels.

DRG stimulators are surgically implanted under the skin somewhere on the lower half of the torso and are battery powered and controlled by an outside remote such as a smartphone.

According to Oxford University Hospitals NHS Trust, most people who have success with a DRG stimulator have more than 50 per cent of their pain relieved.

On some days the pain in her foot was so unbearable it became impossible for her to get out of bed, shower, eat, read or even speak.

Missing a lot of school as a result, she fell out with friends who she said thought she was making it up.

One teacher even told Miss Fowle, who was often reliant on crutches or a wheelchair to get around, to ‘stop limping all the time’, she said.

But after years of suffering with the condition, Miss Fowle discovered a innovative treatment one of her mother’s friends had used.

In April this year, almost 11 years after she first started feeling the pain, Miss Fowle had the dorsal root ganglion stimulator implanted under the skin on her back.

The stimulator is an electrical device which sends gentle impulses into nerves in her spine when she feels pain.

This essentially blocks the pain signals coming from malfunctioning nerves in her leg and reduces the agony she feels.

Connected to an app on her iPhone, the DRGS can be switched on or off whenever Miss Fowle wants to use it.

Neurosurgeons at the John Radcliffe Hospital in Oxford implanted the device – which can be removed if necessary – in a two-hour operation.

‘When I woke up from the operation, it was like a blind had been lifted, and suddenly I could see clearly again,’ Miss Fowle said.

‘I am not totally pain free, but whereas before my day-to-day pain level was around eight out of 10, now it is about four out of 10. 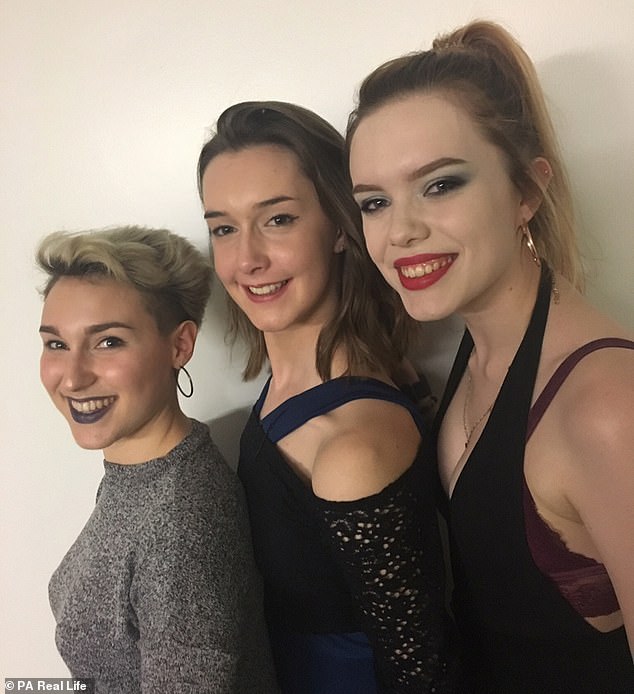 Miss Fowle (right, pictured with her friends) is now able to enjoy life at university in Birmingham and said she feels ‘liberated’ by the pain control device 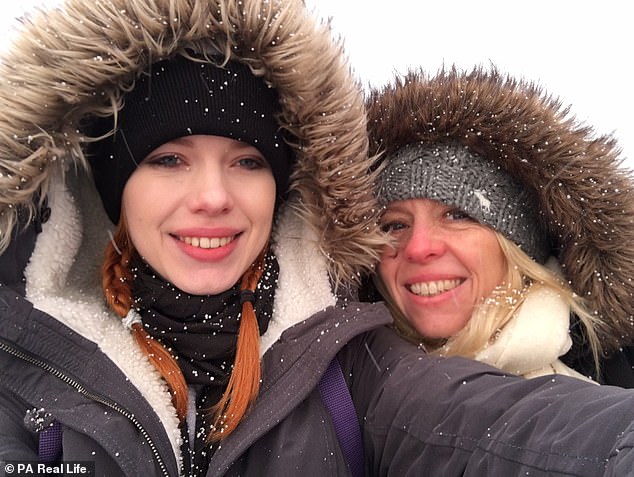 Pictured with her mother, Kate, 53, first found out about the dorsal root ganglion stimulator after one of her mother’s friends revealed they had been given one 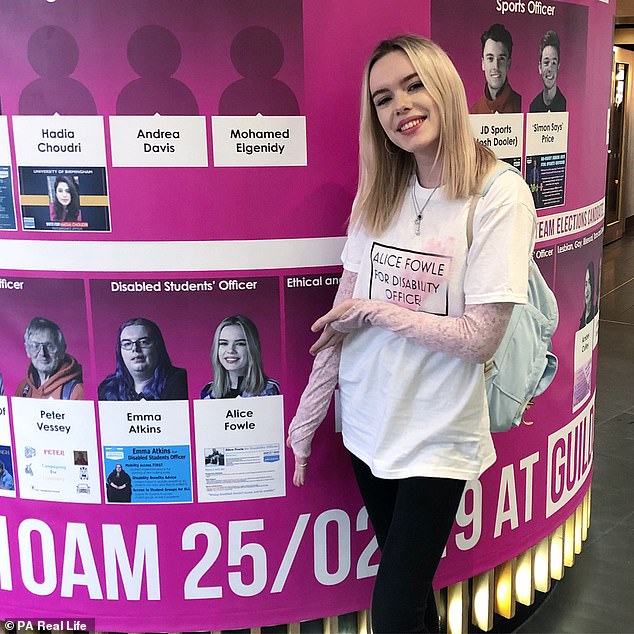 Miss Fowle is now the disability officer at university, where she studies geology. She said: ‘I just feel so liberated now, and I have so many goals and aims that before I would have struggled with, like getting a 2.1 in my degree’

‘And when I have a bad day I am able to use an app on my phone that is connected to the electrodes to reduce the pain.

‘Not having to arrange my life around my pain has meant I just feel so liberated now, and I have so many goals and aims that before I would have struggled with, like getting a 2.1 in my degree.

‘But at the moment, I just want to be able to take my Dalmatian dog, Lottie, on a walk each day as before I couldn’t walk for more than a few minutes.’ 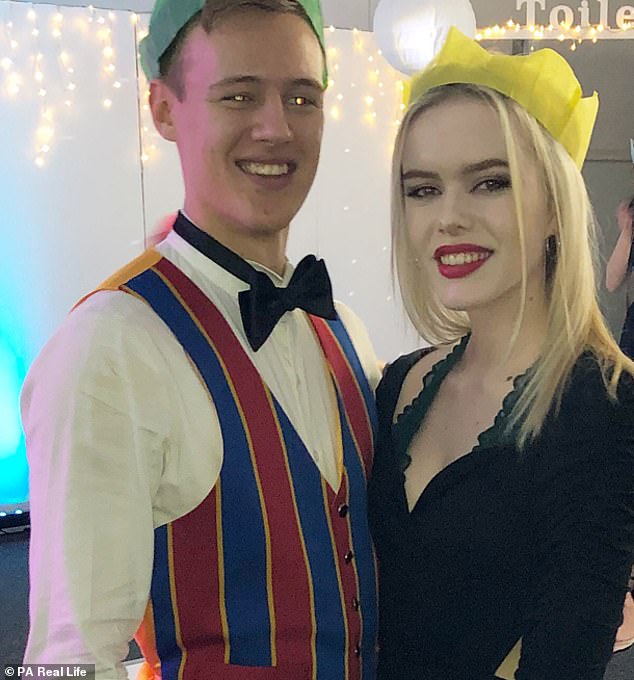 Miss Fowle, pictured with her boyfriend, Aidan Smith, said: ‘Having chronic pain has taught me a lot about myself and my ability to deal with difficult situations’

Now the disability officer at her university in Birmingham, where she studies geology, Miss Fowle said she was ‘astonished’ when doctors first told her about the DRGS.

And having the device put into her back has transformed her life.

‘My mind is so much freer now and I feel I can now do so many things, like get a good degree and spend more time with my friends,’ she said.

‘At the same time though, having chronic pain has taught me a lot about myself and my ability to deal with difficult situations.

‘CRPS might have taken a lot away from me but it’s also made me a stronger person. Now I feel ready to face the world.’

WHAT IS COMPLEX REGIONAL PAIN SYNDROME?

Complex regional pain syndrome (CRPS) is a condition that causes extreme discomfort that does not ease.

It usually affects just one arm or leg following an earlier injury, such as a fracture or sprain with no nerve damage, or nerve damage to a limb.

The body’s reaction is much stronger than usual and often causes pain worse than the original injury.

CRPS’ exact prevalence is unclear, however, a study claimed up to one in 3,800 people in the UK develop the condition each year.

Pain is the main symptom, which may be burning, stabbing, stinging or throbbing.

The affected limb is usually sensitive to touch, with even clothing causing agony.

CRPS also causes swelling that can lead to stiffness, limb weakness and jerky movements. Joints may also appear redder or warmer than usual.

CRPS’ cause is unclear but is thought to be due to the nerves in the affected area becoming more sensitive, which may change the pain pathways between the limb and the brain.

Rarely, stroke or multiple operations to the limb can be to blame.

In one out of 10 cases there is no obvious cause.

What are patients’ treatment options?

There is no one treatment. Therapies aim to maintain movement through rehabilitation and pain relief.

This may include physio and occupational therapies, coping strategies and medications.