Camelid antibodies are single-variable, heavy chain-only antibodies (HcAb) that are naturally produced by camelids and sharks. Unlike conventional antibodies, camelid antibodies do not have a light chain, but consist of two identical heavy chains instead. Molecular biology studies have demonstrated that HcAbs were gained by members of the camel family over the course of evolution. 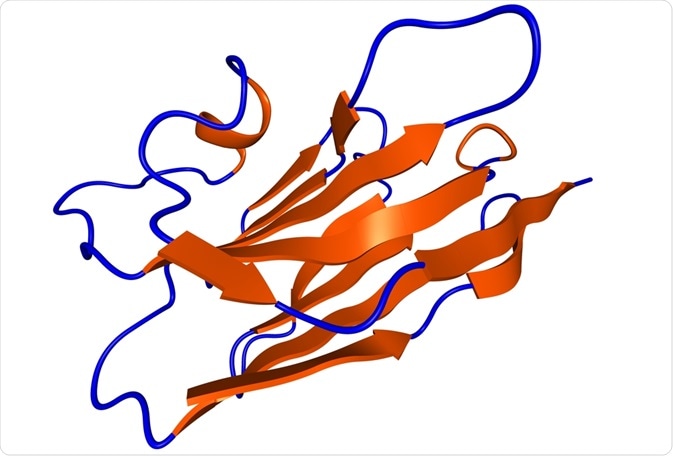 The core structure of VHH consists of four framework regions (FRs) and three complementarity-determining regions (CDRs) that contribute to the antigen binding. Research has demonstrated that the VHH FRs have approximately 80% homology, enabling superimposition of their 3D structure.

Two important features of the dromedary VHHs are the amino acid substitutions at four FR2 positions (free in the conventional VH domains) and the presence of an extended CDR3. Furthermore, VHH antibodies have a relatively variable N-terminal CDR1 region.

The stability of these antibodies has been attributed to the additional disulfide bond that the extended CDR3 forms with a cysteine moiety in CDR1 or FR2. On the other hand, the enhanced hydrophilicity and solubility of VHHs are the combined effects of part of the CDR3 that folds over the previous variable light chain (VL) binding site and the substitutions at FR2, thereby preventing VL pairing.

The surface area of a single VHH domain is as large as (or even larger) than that of a VH-VL paratope, thereby enabling a conformation that fits well into the concave-shaped cavity of the antigen surface. In addition, there is an excellent shape complementarity between the two protein domains in the crystal structure of VHH-antigen complex.

Target-specific VHHs are retrieved by phage display of cloned VHHs and panning on antigens. These recombinant VHHs, also called nanobodies, are used for large-scale production of microorganisms and in a wide range of biochemical and biophysical applications.

When purified by affinity chromatography, recombinant VHHs become soluble in aqueous solutions and display high specificity and affinity for antigens. As a result, these VHHs can withstand stressful conditions as well as thermal denaturation or chemical denaturation.

The nanobodies have been used successfully as tracers of intracellular targets to degrade specific target proteins, or to study real-time formation or disruption of interactions between proteins. By engineering the nanobodies with an extra intra-domain disulfide bond, their resistance against unfolding or proteases increases making them good biosensor probes. The disulfide bond also provides enough stability to the nanobodies for their use in oral formulations.

Studies have demonstrated that nanobodies do not cause immunogenicity reactions as their sequence identity to human VH domains is high, thereby exhibiting stable behavior.

To increase the functional affinity and potency of VHHs, next-generation nanobodies are being extended with Green Fluorescent Protein (GFP) and are also being assembled with bi-specific or bivalent constructs.

VHH antibodies are also being used in assays due to their specificity for small molecules, with a molecular weight less than 500 daltons (Da) – primarily to analyze environmental chemicals and as valuable diagnostics in the agriculture and food industry.

There is a growing interest in using VHH to monitor nutrition, as well as to detect the presence of unwanted/unintentional spikes in components in packaged foods (e.g. the detection of the presence of caffeine in ready-to-drink beverages).

Deepthi spent much of her early career working as a post-doctoral researcher in the field of pharmacognosy. She began her career in pharmacovigilance, where she worked on many global projects with some of the world's leading pharmaceutical companies. Deepthi is now a consultant scientific writer for a large pharmaceutical company and occasionally works with News-Medical, applying her expertise to a wide range of life sciences subjects.