Strength training can be as effective for weight management as aerobic training and combining the two reduces a person's obesity risk by half, research has found.

The study of the exercise habits of 1.7 million adults by the University of Southern Queensland, published in the journal Obesity, found people who did aerobic training or weights alone reduced their obesity risk by about one third. 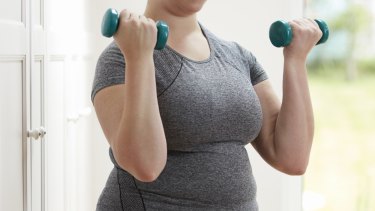 Strength training – using your body weight, hand weights or a machine – may be as effective for weight management as aerobic exercise, study finds. Credit:Getty

Those who did aerobic or just strength training in the new research experienced “pretty similar” benefits. “There was about 30-31 per cent reduced likelihood (of obesity),” said lead author, Dr Jason Bennie, a Senior Research Fellow at USQ's Physically Active Lifestyles Research Group.

“We showed, for obesity, the most favourable was doing both – there was a 50 per cent less likelihood of obesity from doing both.”

About 40 per cent of Australian adults are obese, which increases their risk of health conditions such as diabetes, heart disease, high blood pressure and depression.

There is emerging evidence to suggest doing both forms of training improves insulin sensitivity, markers of glucose metabolism as well as lipid metabolism, increasing HDL cholesterol and decreasing LDL cholesterol.

“There is also a little bit of clinical evidence … that doing both may increase lean muscle mass and that may have a flow-on effect of increasing energy expenditure throughout the day,” Dr Bennie said.

“I was interested in looking at different physical activities and the way they interact with obesity and body mass index,” said Dr Bennie. “The majority of the evidence is around aerobic (exercise). There has been a little bit of evidence saying muscle strength exercise may also be a benefit for obesity prevention.”

Bennie and his team broke down the data from the individuals into four groups based on the recommendation of 150 minutes a week of aerobic exercise, like walking, jogging, tennis or cycling and two strength sessions, like yoga, sit-ups or push-ups, using weight machines, free weights, or elastic bands.

“Obesity is a complex disease – people are not failing on their weight loss attempts due to a lack of willpower, they are failing due to their biology,” says Dr Nicholas Fuller, an obesity researcher at the University of Sydney's Charles Perkins Centre.

While a complex condition, diet and exercise do help in both the prevention and treatment.

“All forms of physical activity have a role to play in not just weight loss but most importantly, prevention of weight regain,” Fuller adds, explaining that . “We know that people who successfully maintain their weight participate in regular activity and more than 200 minutes per week.”

Less than 50 per cent of Australian adults meet the aerobic recommendations and this jumps to 85 per cent if you add in at least two sessions of strength-promoting exercise a week.

“The best type of exercise is one that a person sticks to and in an environment where one feels comfortable," said Dr Fuller. "For many, this may mean cycling on a stationary bike or performing a body-weight circuit in the comfort of their own home.

“When it comes to exercise, it is just as important as what you put in your body when trying to lose weight, because physical activity will help preserve lean body mass (muscle mass), which is a strong predictor of keeping weight off. It doesn’t matter what type a person does – any movement is good.”