Street drugs are being laced with a COW tranquilizer: FDA warns cocaine, meth and heroin is being cut with deadly animal sedative ‘xylazine’

Americans are being warned that a dangerous animal tranquilizer could be lurking in illegal street drugs.

The Food and Drug Administration (FDA) has issued a warning about xylazine, which is showing up in a growing number of toxicology reports after fatal overdoses.

Xylazine is not approved for human consumption and is typically used as a sedative or painkiller for cows and horses in veterinary medicine.

The FDA warns in people it can cause ‘serious and life-threatening side effects that appear to be similar to those commonly associated with opioid use’.

Yet xylazine is increasingly being used by drug dealers as a cutting agent in heroin, meth, cocaine and opioids, the federal agency told stakeholders in a letter Tuesday.

The alert warned that it can be ‘difficult to distinguish’ a xylazine overdose from opioid overdose — both cause the lungs to start failing.

But unlike opioids, xylazine overdoses cannot be curtailed with naloxone, the emergency opioid overdose reversal drug. 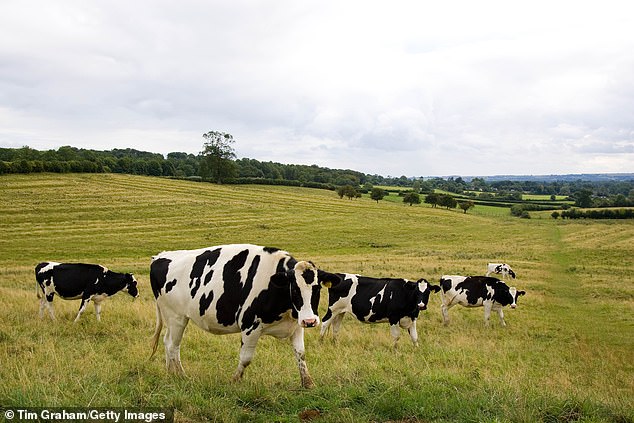 The tranquilizer xylazine is approved only for veterinary use and is commonly used for cows. horses, and other animals. In people, it can depress the central nervous system and the respiratory system. 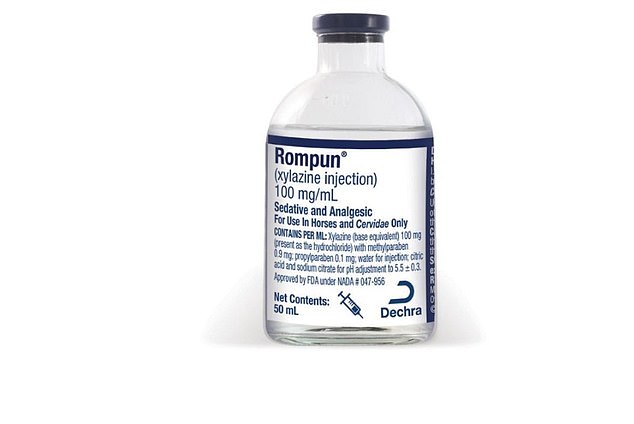 The animal sedative has becoming an increasingly common adulterant in heroin and some stimulants like cocaine and meth. Because it is not an opioid, its effects cannot be curtailed with the opioid overdose reversal drug naloxone.

Xylazine is not to be confused with the popular hallucinogenic ketamine, which was originally developed as a horse tranquilizer.

While national figures involving xylazine are murky – the drug can only be detected using advance drug screens – several are reporting troubling trends.

It has been involved in up to 20 per cent of overdose deaths in the worst-affected states, including Massachusetts, Connecticut, Illinois, and Pennsylvania.

Xylazine – sold under the brand name Rompun in the US – first rose in popularity in Puerto Rico in the 2000s where it is known as ‘anestecia de caballo’.

Xylazine is a non-opioid agent that FDA originally approved in 1972 as a sedative and analgesic for use in veterinary medicine.

The drug acts as a central alpha-2- adrenergic receptor agonist in the brainstem, causing a rapid decrease in the release of norepinephrine and dopamine in the central nervous system (CNS).

Xylazine may also bind to other CNS receptors, although further research is needed.

Xylazine is not approved for use in humans.

Overdoses may appear similar to that of opioids, making it difficult to distinguish.

But unlike opioids, xylazine overdoses cannot be curtailed with naloxone, the emergency opioid overdose reversal drug.

Repeated exposure to xylazine, by injection, has been associated with severe, necrotic skin ulcerations that are distinctly different from other soft-tissue infections (e.g., cellulitis, abscesses) often associated with injection drug use.

These ulcerations may develop in areas of the body away from the site of injection.

It has become a common heroin adulterant, a cheap way for drug dealers to improve uptake of the drug and enhance the potency of the drug.

In Puerto Rico, xylazine has been most prevalent in a drug combination nicknamed the ‘speedball’, which is comprised of heroin and cocaine and is used to balance the effects of both the downer and the upper.

A 2008 study found that more than 90 per cent of syringes used for speedballs tested from Puerto Rico were found to contain xylazine.

Public health officials there were tipped off in part due to the appearance of ulcers on users’ skin where they injected the drug.

The painful lesions are often made worse when users inject the same spot repeatedly hoping to benefit from the opioid’s analgesic effect.

The drug has left a stain on Philadelphia, home to the largest open-air narcotics market for heroin on the East Coast.

Between 2010 and 2015, xylazine was detected in 40 of Philly’s 1,854 unintentional overdose deaths (just 2 per cent) with heroin and/or fentanyl detections.

The presence of xylazine in Philadelphia has spiked since then.

In 2020, xylazine was present in nearly 26 per cent of overdose deaths in Philadelphia, followed by about 19 per cent in Maryland and 10 per cent in Connecticut.

The FDA said: ‘Healthcare professionals who manage opioid overdoses should consider xylazine exposure if patients are not responding as expected when naloxone is administered or when signs or symptoms of xylazine exposure (e.g., unusual skin necrosis) are present.’

The drug’s rise in prevalence suggests that the ongoing crisis of drug overdose deaths is far from over.

The overdose epidemic was made worse by the Covid pandemic, which required people early on to quarantine and maintain distance from others, leading to feelings of isolation and despair.

The strict restrictions on movement that were established in early 2020 further limited treatment options for people in recovery.

The number of fatal drug overdoses jumped 15 per cent in 2021 to more than 107,000, overtaking the previous record set the year before.

The synthetic opioid fentanyl drove up overdoses more than any other drug, leading to more than 71,000 deaths, up 23 per cent from the year before.

Fatal overdoses linked to cocaine increased by 23 per cent in 2021, while deaths due to methamphetamine overdoses grew by 34 per cent.