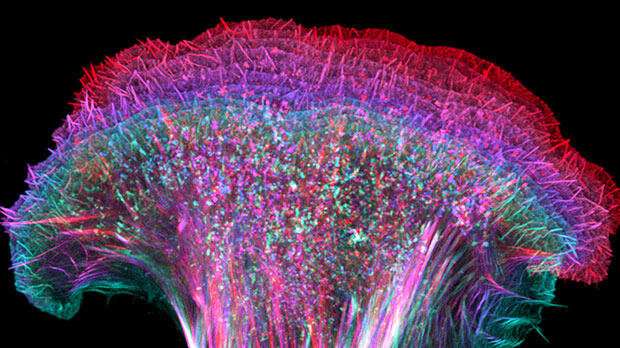 It vaguely resembles a wave under the microscope, the cell’s edge crashing and tumbling as it advances across the slide. But despite appearances, how cells move is a precise and tightly controlled process, involving a dynamic network of molecules.

Escaping these mobility restrictions is an important part of how cancer cells spread around the body, and something that Dr. Nikki Paul at the Cancer Research UK Beatson Institute aims to understand in more detail.

It’s vital work for Paul, as most patients die from cancer that’s spread and settled in another part of the body, through a process called metastasis. She hopes to find ways to stop cancer cells moving or slow them down by using drugs that block molecules responsible for them going astray.

Cells are constantly talking to each other, receiving and giving out signals. And some of these signals prompt cells to pick up and move to a completely different part of the body. This migration can be hugely beneficial for the body, mobilising our immune cells to help us fight infection or cells coming together to form a scab over a wound.

But in the case of cancer cells, it’s not quite as desirable.

Which is where Paul comes in. She wants to know where they are going, what makes them decide to break away from where they originally started growing and, ultimately, how can they be stopped.

She’s focusing on finger-like projections made of actin that help cells move around—filopodia. Cancer cells have more of these spikey projections, shown in white in the video above, than healthy cells. And Paul wants to know why, so that she can find a way to stop or slow down cancer cell migration.

And to do that, Paul needed access to some fairly sophisticated cameras.

A cell of ice and fire

Luckily, the Cancer Research UK Beatson Institute is home to a number of powerful microscopes that allow scientists to look down to the level of individual cells.

The image at the top was taken by a super resolution microscope. It is a snapshot of a single mouse skin cancer cell as it moved across a petri dish.

And by using a dye that that binds to the actin filaments that make up the finger-like projections, Paul can watch the cancer cell live under a microscope as it moves. The arc at the top of the image shows the leading edge of the cell, which has a built-in compass. And the different colours represent the distance the cell has moved—from blue to pink to red—as it slides along the surface.

By using the super resolution microscope, Paul can visualise the dynamics of cell migration and interactions with other cells. And it’s revealed some interesting preferences.

This particular mouse melanoma cell moves on its own, but there are other types of cancer cells that prefer to migrate in a group, and some move faster than others. These differences could be important when it comes to developing strategies to prevent cancer cells from spreading.

“We can visualise cancer cell migration in tissues as well, it’s really helpful in recapitulating what is happening in patients,” explains Paul.

Why do cancer cells migrate?

We’ve blogged before about why cancer might spread to other parts of the body. And it turns out, there are lots of things that might make a cancer cell wander away from where it first started to grow.

Often, cancer cells accumulate changes in their DNA that makes them more active and more likely to migrate. But it’s not the only reason cell’s start to move, they’re also constantly surveying and responding to changes in their environment.

Paul explains that certain DNA faults can change a cell’s needs. They might want more nutrients, for example. And these cravings can cause the cancer cell to break away from the tumour and enter the bloodstream, to seek out a more comfortable place to grow.

But for Paul, it’s not all about the why. Understanding how cells move and invade other parts of the body is a vital piece of the puzzle, particularly if the goal is to put the brakes on cancer cells.

Scientists like Paul can visualise cancer cells under the microscope and monitor how they respond to drugs that target how cells move. By creating time-lapse videos, Paul can track the speed and distance of the cells over time and understand how they put one foot in front of the other.

Together, this provides important information that they can use to develop strategies to stop cancer in its tracks.