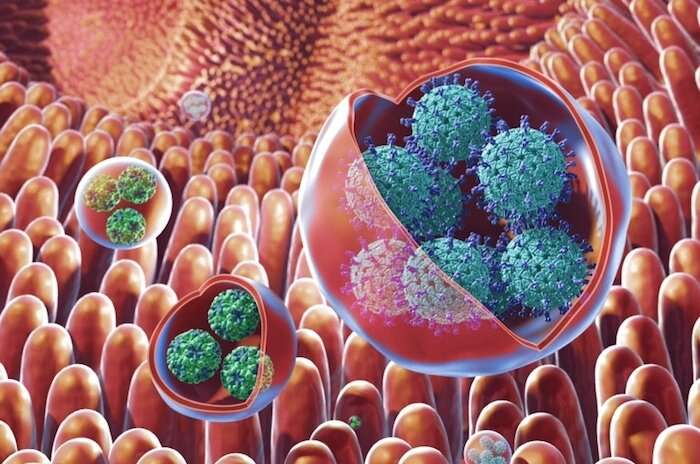 While COVID-19 cases continue to drop in the U.S., outbreaks of another virus—the stomach flu—are ramping up, the Centers for Disease Control and Prevention reports.

This comes amid easing virus restrictions nationwide. For most of the U.S., roughly 99.5%, it isn’t recommended to wear a mask indoors in public because of low or medium COVID-19 Community Level as of March 31, the CDC says.

With people returning to offices and schools—two of the most common spots for norovirus outbreaks—cases of the stomach flu are getting closer to the numbers reported before the pandemic, according to NBC News.

Dr. Robert Atmar, a professor at Baylor College of Medicine in Houston, told the outlet that the lifting of COVID-19 restrictions is likely connected to the rise in norovirus infections.

“Battling norovirus while nursing my sick daughter. Worrying when my son goes to school if he will get COVID …. anxiety levels are reaching breaking point,” British art historian Dr. Janina Ramirez wrote April 5 on Twitter. The norovirus “is the most common stomach bug in the UK, affecting people of all ages,” according to the Broxbourne Council.

Here’s what to know about the stomach flu:

Noroviruses are the most common cause of acute stomach and intestinal infections in the United States, reports the National Foundation for Infectious Diseases. It’s also sometimes called stomach flu, viral gastroenteritis or the winter vomiting bug. The U.S. reports 19 million to 21 million cases a year. Humans are the only hosts of the virus.

The virus was formerly known as the Norwalk virus because the first known outbreak took place at an elementary school in Norwalk, Ohio, according to norovirus.com. Scientists identified the virus in 1972 from stool samples stored after the outbreak. It was officially renamed norovirus by the International Committee on Taxonomy of Viruses.

How contagious are noroviruses?

Extremely. The U.S. Centers for Disease Control and Prevention cautions that noroviruses can be transmitted by infected people, contaminated food or water, or just by touching contaminated surfaces. People with a norovirus are most contagious during the illness and for a few days afterward, and the virus can remain in stool for up to two weeks after the illness. The virus can survive temperature extremes, too.

Also, catching a norovirus doesn’t help you fight it off later, in part because there are many different types of noroviruses—catching one doesn’t protect you from the others.

Where do noroviruses spread?

Cruise ships, nursing homes, daycare centers and schools are common breeding grounds for norovirus—anywhere large numbers of people are packed in close quarters, basically, reports the CDC. Outbreaks on cruise ships frequently make the news, and there are countless travel websites dedicated to tracking cruise lines with the worst records for the illness.

What are the symptoms of a norovirus?

Diarrhea, cramps and vomiting usually start within 12 to 48 hours of exposure to the virus, says the Mayo Clinic. Norovirus symptoms normally last one to three days, and most people recover without treatment. But infants, older adults and people with chronic illnesses may require medical attention for dehydration.

Since it’s a virus, antibiotics aren’t any help, and there are no antiviral drugs for noroviruses.

The Mayo Clinic advises that people with norovirus take special care to replace fluids lost by vomiting or diarrhea to prevent dehydration. Drinks like Pedialyte are good for young children, while sports drinks and broths are suggested for adults. But sugary drinks, like sodas and fruit juices, can make diarrhea worse, while alcohol or caffeinated drinks can speed dehydration.

How can you avoid noroviruses?

Good hygiene is the key to avoiding noroviruses, suggests WebMD.com. Wash your hands frequently with soap and water, particularly after using the bathroom and before preparing food. Alcohol-based cleaners are not as effective. The site also advises carefully throwing away contaminated items, such as dirty diapers.