Stomach cramps often occur after eating, but if in women they occur alongside heavy periods and lower back pain, they could be a sign of a condition known as fibroids. Fibroids are non-cancerous growths that develop in or around the womb. These are not cancerous, but affect one in three women. Dr Chris Steele took to ITV’s This Morning to reveal what to look out for and how the condition can be treated.

Fibroids are not cancerous but affect one in three women

Some women don’t show symptoms, but if they do occur, Dr Chris said to look out for the following:

If you experience these symptoms you’ll usually be referred to a gynaecologist.

Medical and surgical treatments are available, according to the TV doctor. 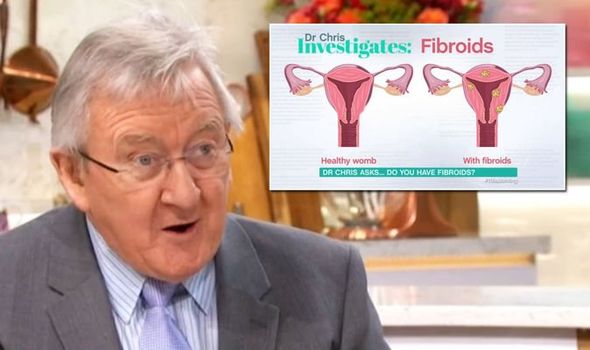 He said: “The pill and coil reduce heavy periods, gonadotropin is a hormone that has an effect on periods, Esmya is medication used to shrink the fibroids, surgery can be used to cut out the single fibroid, keyhole to make a small incision in the abdomen, or a hysterectomy is where the uterus is taken out.”

Dr Chris added: “A fibroid that’s destroyed or taken out does not return but new ones can grow.

“We don’t know what causes them to grow, but they have been linked to oestrogen because after menopause fibroids shrink.

“If periods start before 11, you’re exposed to oestrogen for longer, so you may be more prone.”

The NHS states fibroids most often occur in women aged 30 to 50. 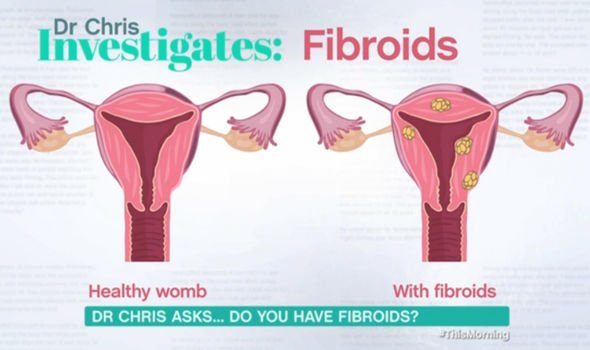 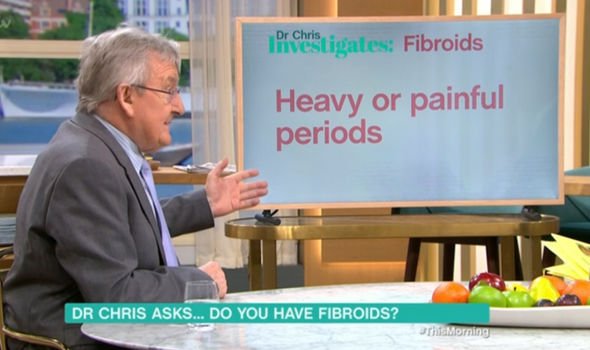 They’re though to develop more frequently in women of African-Caribbean origin, and it’s also thought they occur more often in overweight or obese women, because being overweight increases the level of oestrogen in the body.

Fibroids don’t always need to be treated if they aren’t causing symptoms.

The health body advises: “Over time, they’ll often shrink and disappear without treatment, particularly after the menopause.”

In rare cases, if fibroids are left untreated they can lead to significant problems.

These include problems during pregnancy, such as premature labour and miscarriage and infertility.

Earlier this month, Dr Chris opened up about his skin cancer scare.