Russia recently rolled out the single-dose Sputnik Light COVID-19 vaccine — also known as Gam-COVD-Vac — for wide circulation. However, some global health authorities argue that more tests are necessary to confirm its reliability. 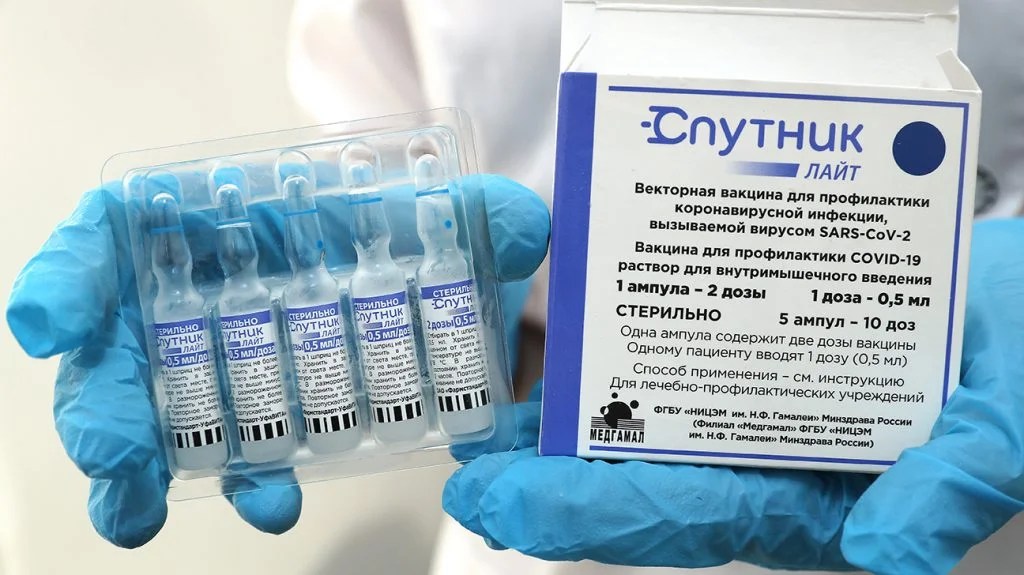 that “using the same adenovirus for the two doses could lead to the body developing an immune response against the vector and destroying it when the second dose is administered.” Using two different vectors is one way to reduce the chance of this natural bodily response.

How do Sputnik Light and Sputnik V differ?

This newer vaccine consists of just the first dose of Sputnik V — the one that uses the AD26 adenovirus. The fact that the company produced the first component in significantly larger quantities than the second prompted the decision to approve and circulate the scaled-down version of Sputnik V.

The second Sputnik dose is more volatile and harder to produce than the first.

However, the primary advantage that the Light version has over the standard V version is that it is possible to ship the one-shot vaccine quickly to a country in the midst of an acute COVID-19 outbreak.

Offering a 79.4% efficacy and costing less than $10 per dose, Sputnik Light solves the challenge of immunizing large groups of people in a shorter time frame, according to Kirill Dmitriev. Dmitriev is head of the Russian Direct Investment Fund, which is responsible for promoting Sputnik vaccines abroad.

The adverse events that people have reported after receiving Sputnik Light are, so far, similar to those of other COVID-19 vaccines. They include:

At present, there are of the rare blood-clotting side effects that people have reported in connection with the Oxford-AstraZeneca and Johnson & Johnson COVID-19 vaccines.

Despite Sputnik V being authorized for use in 69 countries and Sputnik Light being authorized in 10 countries, neither of these vaccines has received authorization for emergency use from the European Medicines Agency (EMA) or the World Health Organization (WHO).

There is skepticism around the safety of the Sputnik vaccines because of the apparent lack of data from clinical trials. President Putin of the Sputnik V vaccine before the publication of the phase 1 and phase 2 trial data.

In addition, phase 3 trials had not begun before the vaccine was authorized for use in Russia.

Even now that the vaccine developers have published trial data, an open letter in a recent issue of indicates that some scientists remain skeptical.

The experts who signed the letter cited a lack of transparency and inconsistencies concerning the reported data.

The developers that the data were sufficient to confirm the vaccine efficacy that they had reported. However, the questions around thorough testing and accurate reporting persist for many in the scientific community.

The future of the Sputnik vaccines

Using the two-dose version of Sputnik, health authorities have fully vaccinated about 8 million people in Russia. However, Russia is now ready to launch an official re-vaccination program due to a sharp rise in cases and the spread of the delta variant.

Sputnik Light will serve as the booster shot for Russians who received the two-dose version at least 6 months earlier. The two-dose Sputnik V will remain the primary COVID-19 vaccine in Russia, though.

The University of Oxford and AstraZeneca have that will take place in Russia and assess whether mixing doses of their vaccine and Sputnik V may yield any more benefits.

In addition, are underway in countries that have approved the Sputnik vaccines. These efforts should yield a more accurate picture of the safety of both Sputnik V and Sputnik Light.

Questions also remain about this vaccine’s efficacy in preventing the development of COVID-19 symptoms, particularly in the case of SARS-CoV-2 infections resulting from the delta variant of this virus, which appears to be more transmissible than previous variants.

Reports indicate that a single shot of the Oxford-AstraZeneca COVID-19 vaccine — which is also a viral vector vaccine — is not as effective as two doses in preventing severe COVID-19 following infection with the delta variant of SARS-CoV-2. Whether single-shot Sputnik Light will be up to the task remains to be seen.