Most living, breathing humans can agree that nothing beats a good burger. Whether you’re getting it from the pub, a fancy restaurant or just a fast food chain mid road-trip, it always hits the spot.

Recently, a lot of Australian fast food chains have been jumping on board the vegan burger train, offering some tasty options for their plant-based customers. But how do they compare to the “real thing”? 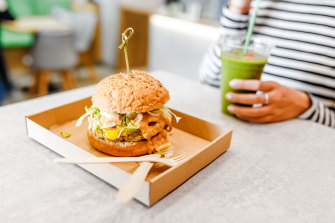 Robbie Clark: “It really depends on the health goals of the individual, and going off the nutritional information panel may not be enough”.Credit:iStock

I decided to round up the vegan options at all our nationwide fast food joints to see just how good they really are. But it’s easy to fall into the trap of thinking that vegan menu options can be a healthier choice, especially when they’re marketed on signs with green fonts and plant drawings.

I asked Robbie Clark, an accredited practising dietitian and the co-founder of HealthBank, to help me compare these burgers from a nutritional standpoint.

Let me start by complimenting Grill’d on their extensive range: there are nine  meat-free options, which is way more than I can say for any other fast food chain. As well as veggie patties, they’ve got two different types of “fake meat” patties that are supposed to taste pretty similar to the real thing. I went for the classic Vegan Cheeseburger with their signature “beef patty” and it was honestly not the best. As a whole, it tasted fine, but I think that’s thanks to the cheese-pickle-tomato sauce combo that always makes everything delicious.

The cheese was pretty goopy and kept getting stuck to the roof of my mouth – a property that’s pretty common of vegan cheese. The patty on its own tasted pretty gross: it had a hint of ~meat flavour~, but not in a good way. Considering how pricey this burger was as well, I can’t say I recommend it. And according to Robbie, it’s definitely a less healthy option than their standard meat-filled burgers when you compare their calorie, fat and sodium contents.

Hungry Jacks’ Rebel Whopper has a plant-based patty, but can’t technically be called a vegan burger as it’s grilled on the same hot-plate as the meat. They do have a completely vegan burger on offer, which is essentially just a vegetable patty with vegan cheese. I tried the Rebel Whopper with vegan mayo, which was hands-down INCREDIBLE.

It’s not a healthier option to the meat patty because of the additives and thickeners, which “does not make it a desirable choice”, according to Robbie. But it tastes phenomenal, and so much like meat. I truly don’t know how they did it. Even on its own the patty had an amazing amount of flavour, with smoky barbecue undertones. Plus, it didn’t give me the meat sweats that can often come with the classic Whopper. If you’re avoiding meat but missing burgers, this will be heaven for you – just don’t eat them on a daily basis because they’re definitely terrible for your health. Ten out of 10 from me

The great thing about the Schnitz menu is the ability to sub out the chicken schnitzel in any burger for a veggie one – at no extra charge. It looks just like a normal schnitty, and I thought it would be one of those Quorn-style fake chicken patties that taste pretty similar to the real thing. But unfortunately it was just a fried patty filled with veggies and onion.

For some reason, Schnitz refused to give me the ingredient list so I have no idea what’s actually in it, but I can report that it’s pretty tasty. A little heavy on the onion but their vegan cheese option is pretty solid. Compared to the other chicken shop burgers I tried, this was probably my least favourite. But we all know that Schnitz has the best chips of any fast food chain in Australia so it’s worth enduring the burger just for those.

Oporto’s vegan burger is once again another fried vegetable patty. This one’s made with peas and basil, making it a pretty different vibe to the usual Bondi Burger taste that you’d get from Oporto. The capsicum relish and avocado on there do add some good texture, but it’s not really the sort of flavour you want from a Portuguese chicken joint.

If you’re in the mood for a burger and Oporto is right there, it’s certainly a good option. But if you’re craving Oporto while avoiding meat, this probably won’t hit the spot. However, Robbie points out that from a health standpoint, the vegan burger wins out against the standard chicken burger. “It’s lower in the saturated fat, sugars, and sodium, which tend to be detrimental to our health.”

Plus, the meat used at Oporto is only 94 per cent chicken – the rest is additives. “In comparison, the pea and basil vegan patty looks to be a better choice,” according to Robbie.

I thought the Nando’s burger was just going to be a repeat of Schnitz: some mushed up veggies fried into a patty and whacked on a burger. On paper it sounds the same, but the reality is so much tastier.

The veggie patty is grilled instead of fried, and it’s full of spices that give it a much richer flavour. Paired with Nando’s peri peri sauce, I enjoyed it more than I’d enjoy a normal chicken burger. You can also get it in a wrap or a pita, which was a nice reprieve after eating four vegan burgers in three days. According to our expert Robbie, compared to their classic chicken burger it does not have as good a ratio of carbs to fat. But of all the vegan burgers I tried, Nando’s one was the lowest in fat and calories. Is it because it’s smaller? Probably. But whatever.

There is a high-protein fake chicken burger on the horizon for Nando’s, but it’s currently  available only in Queensland. It’s meant to taste pretty similar to the standard Nando’s burger so I’m just gonna be sitting here patiently waiting for it to be available in Sydney.

At the end of the day, no one eats a burger under the illusion that it’s a healthy choice. And it definitely isn’t, especially these vegan options. They were all higher in total calories, total fat, and sodium, than their meaty counterparts. Though Robbie points out that “it really depends on the health goals of the individual, and going off the nutritional information panel may not be enough”. Sometimes you feel better after eating a plant-based burger than a meaty one, and it’s always good to have that option there if you want it.