This represents 71.9 per cent of all those who are invited to the tests and marks a small rise from 71.4 per cent the year before.

That percentage had been falling almost constantly for eight years and only rose once during that time – in 2014.

Health experts said it was promising to see an increase but the good news shouldn’t distract from the issue of one million women choosing not to go.

The lifesaving tests look for cell changes which could lead to cancer in an effort to catch the deadly disease early on. 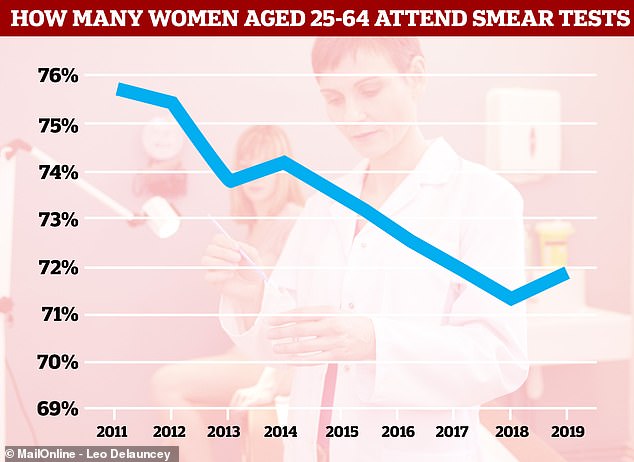 The proportion of women aged 25-64 who attend their routine smear tests rose last year for only the second time in eight years, from 71.4 per cent to 71.9 per cent

‘While we have seen small gains in attendance, we must not lose sight of the fact that one million women did not attend cervical screening last year in England,’ said the chief executive of the charity Jo’s Cervical Cancer Trust, Robert Music.

‘We remain far below the 80 per cent target and have a long way to go.’

The charity says there are various reasons women choose not to go to appointments, ranging from embarrassment, fear of the procedure, difficulty getting to a doctor or not understanding the tests’ purpose.

There was a small boost in screening attendances when reality TV personality Jade Goody died of cervical cancer in 2009, but rates then continued to fall.

In England cervical smear tests are offered to women between the ages of 25 and 49 every three years, and every five years for those between 50 and 64. Over-64s are only invited to routine appointments if they have had an abnormal result in the past.

NHS statistics show how attendance has changed over the past eight years:

The Government and the NHS have attempted numerous measures in recent years to increase screening coverage and make the tests more effective.

In 2017, when coverage hit a 20-year low, health bosses urged GPs to offer women more morning and evening appointments to fit into their busy lives.

A Public Health England awareness campaign launched earlier this year urged women not to be afraid of smear tests, which some say are uncomfortable.

And the company Capita, which used to send out invites on behalf of the NHS but failed to deliver 47,000 of them, was this year stripped of the admin contract in favour of the NHS doing it itself.

The tests themselves are also being replaced with more sensitive versions and HPV tests – the virus causes 99 in 100 cases of cervical cancer – in a bid to spot early signs of cancer even sooner.

Robert Music added: ‘With HPV testing being rolled out we now have a far more effective screening method which can prevent many more cancer diagnoses.

‘Ensuring women can access and understand the benefits of this test should be paramount.

‘Ensuring women fully understand what it means to be tested for HPV, to be diagnosed with it and implications on daily life is equally as important.

‘We are seeing increasing numbers of women who are confused and fearful following a HPV test and this needs to change.’ 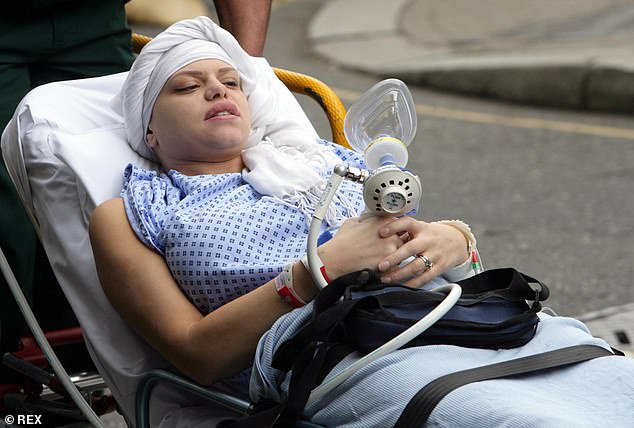 Cervical cancer is almost always caused by the HPV virus, which is spread through sex.

It is diagnosed around 3,200 times per year in the UK and kills just under 300 women annually, according to Cancer Research UK.

The disease is hard to catch early without screening, however, and only around four out of 10 patients survive for a decade or more after their diagnosis.

WHAT IS A SMEAR TEST?

A smear test detects abnormal cells on the cervix, which is the entrance to the uterus from the vagina.

Most test results come back clear, however, one in 20 women show abnormal changes to the cells of their cervix.

In some cases, these need to be removed or can become cancerous.

Being screened regularly means any abnormal changes in the cells of the cervix can be identified at an early stage and, if necessary, treated to stop cancer developing (stock)

Cervical cancer most commonly affects sexually-active women aged between 30 and 45.

In the UK, the NHS Cervical Screening Programme invites women aged 25-to-49 for a smear every three years, those aged 50 to 60 every five years, and women over 65 if they have not been screened since 50 or have previously had abnormal results.

Women must be registered with a GP to be invited for a test.

In the US, tests start when women turn 21 and are carried out every three years until they reach 65.

Changes in cervical cells are often caused by the human papilloma virus (HPV), which can be transmitted during sex.

In January 2018, women shared selfies with smeared lipstick on social media to raise awareness of the importance of getting tested for cervical cancer in a campaign started by Jo’s Cervical Cancer Trust.