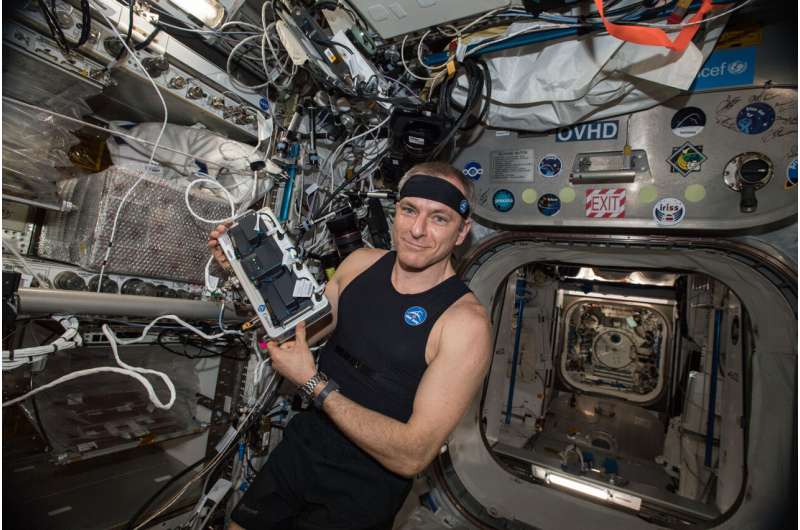 A technology-packed tank top offers a simple, effective way to track astronauts’ vital signs and physiological changes during spaceflight, according to research being presented at the American Physiological Society annual meeting during the Experimental Biology (EB) 2021 meeting, held virtually April 27-30.

By monitoring key health markers over long periods of time with one non-intrusive device, researchers say the garment can help improve understanding of how spaceflight affects the body.

“Until now, the heart rate and activity levels of astronauts were monitored by separate devices,” said Carmelo Mastrandrea, Ph.D., a postdoctoral fellow at the Schlegel-University of Waterloo Research Institute for Aging in Canada, and the study’s first author. “The Bio-Monitor shirt allows simultaneous and continuous direct measurements of heart rate, breathing rate, oxygen saturation in the blood, physical activity and skin temperature, and provides a continuous estimate of arterial systolic blood pressure.”

The Bio-Monitor shirt was developed for the Canadian Space Agency by Carré Technologies based on its commercially available Hexoskin garment. In a study funded by the Canadian Space Agency, a team of researchers from the Schlegel-University of Waterloo Research Institute for Aging oversaw the first test of the shirt in space for a scientific purpose. Astronauts wore the shirt continually for 72 hours before their spaceflight and 72 hours during spaceflight, except for periods of water immersion or when the device conflicted with another activity.

The shirt’s sensors and accelerometer performed well, providing consistent results and a large amount of usable data. Based on these initial results, researchers say the shirt represents an improvement over conventional methods for monitoring astronauts’ health, which require more hands-on attention.

“By monitoring continuously and non-intrusively, we remove the psychological impacts of defined testing periods from astronaut measurements,” said Mastrandrea. “Additionally, we are able to gather information during normal activities over several days, including during daily activities and sleep, something that traditional testing cannot achieve.”

In flight, the astronauts recorded far less physical activity than the two and a half hours per day recorded in the monitoring period before takeoff, a finding that aligns with previous studies showing large reductions in physical activity during spaceflight. In addition to monitoring astronauts’ health and physical activity in space, Mastrandrea noted that the shirt could provide early warning of any health problems that occur as their bodies re-adapt to gravity back on Earth.