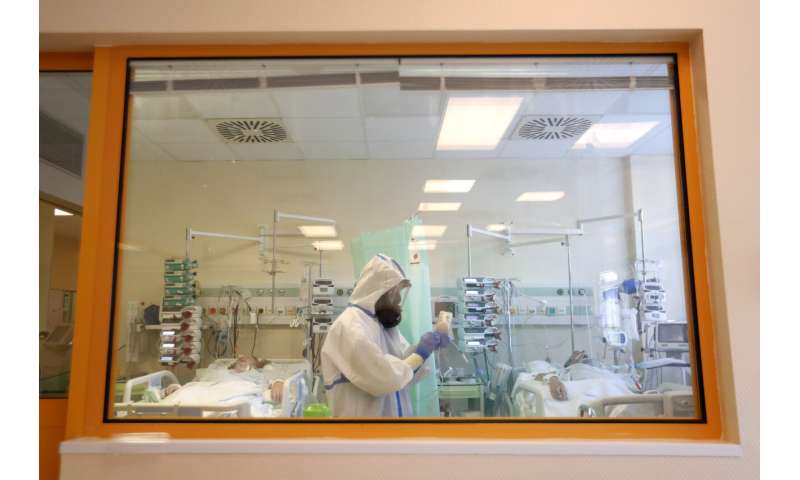 Soldiers in Poland are giving coronavirus tests. American National Guard troops with medical training are headed to the Czech Republic to work alongside doctors there. A Czech university student is running blood samples to labs, and the mayor of the capital is taking shifts at a hospital.

With cases surging in many central European countries, firefighters, students and retired doctors are being asked to help shore up buckling health care systems.

“This is actually terrifying,” Dr. Piotr Suwalski, the head of the cardiac surgery ward at a Polish hospital said on a day when daily COVID-19 cases rose 20% nationwide. “I think if we continue to gain 20% a day, no system can withstand it.”

Even before the pandemic, many countries in the region faced a tragic shortage of medical personnel due to years of underfunding in their public health sectors and an exodus of doctors and nurses to better paying jobs in Western Europe after the nations joined the European Union in 2004. Now, with the virus ripping through their hospitals, many health workers have been sickened, compounding the shortfall.

Over 13,200 medical personnel across the Czech Republic have been infected, including 6,000 nurses and 2,600 doctors, according to the doctors’ union.

It’s not just clinicians these countries need. Both Poland and the Czech Republic are building field hospitals as beds fill up on wards, and authorities say there are only 12 ventilators left in all hospitals taking COVID-19 patients in the region around Warsaw, the Polish capital. 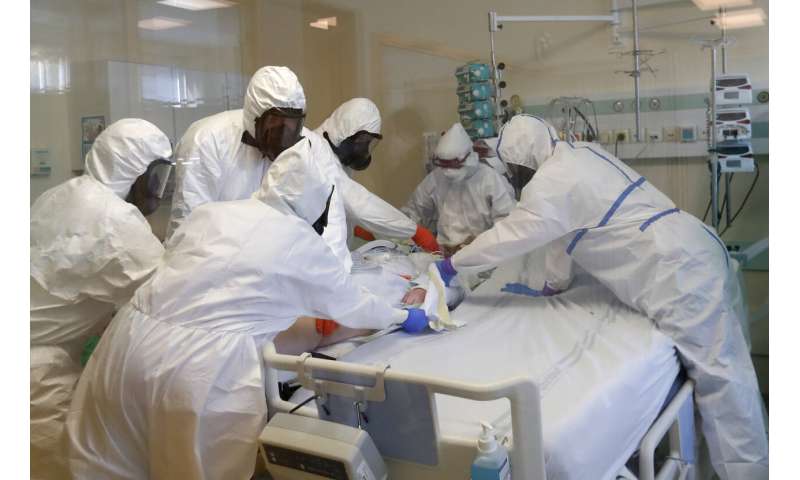 This may sound familiar, but not for these countries. Many in the region imposed tough restrictions in the spring—including sealing borders and closing schools, stores and restaurants—and saw very low infection rates even as the virus killed tens of thousands in Western Europe.

But now many central European countries are seeing an onslaught similar to the one their western neighbors experienced—and the same dire warnings.

As he announced new restrictions last week, Czech Prime Minister Andrej Babis put a date on when his country’s health system would collapse, if the new regulations were not imposed to slow the virus’s spread: between Nov. 7 and 11.

With one of the highest infection rates in Europe, the Czech Republic’s hospitals are desperately looking for volunteers. The government is deploying thousands of medical students to hospitals and other students to testing sites. 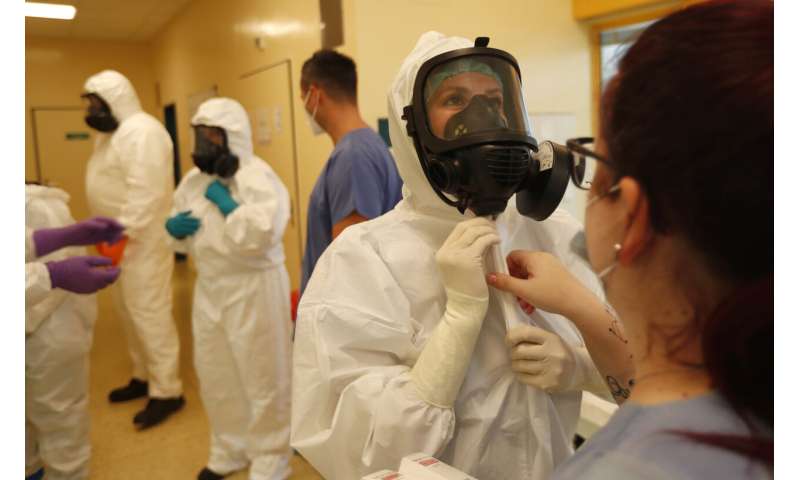 In the capital of Prague, Mayor Zdenek Hrib, who has a degree in medicine, volunteered to help do initial exams of possible coronavirus patients at a university hospital. Soon, 28 medical personnel from the Nebraska and Texas national guards are expected to arrive to help treat patients at Prague’s military hospital and a new field hospital at the city’s exhibition ground.

Croatia has asked former doctors to come out of retirement to help in hospitals, while Slovenia has put retired physicians and current medical students on standby in case its situation deteriorates.

Poland, meanwhile, is mobilizing soldiers to conduct COVID-19 testing, so medical professionals can focus on helping patients, as Warsaw’s National Stadium and other spaces are being transformed into field hospitals. Twice this week, the country has reported a record number of daily new infections, and on Wednesday it also announced a record number of daily deaths, at 236. 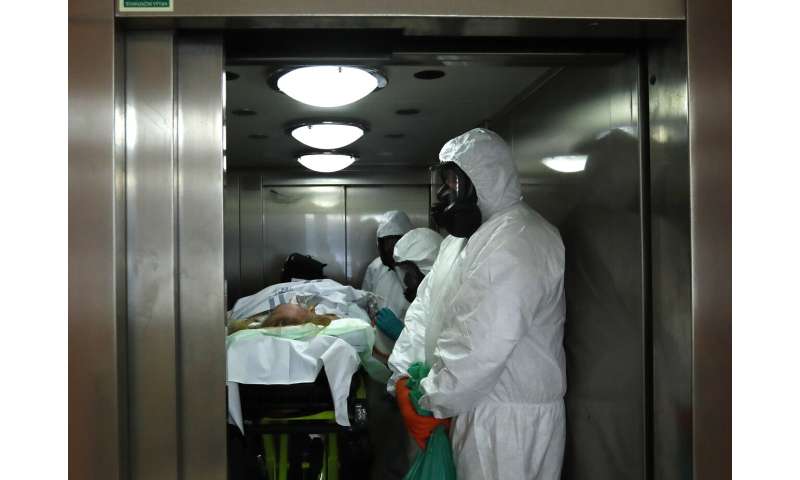 At the Interior Ministry Hospital in Warsaw, the capital’s main coronavirus hospital, deaths among people with cancer and other illnesses are also rising because doctors and nurses simply cannot keep up with their care, said Suwalski, the head of the cardiac surgery ward.

“The numbers of victims of this pandemic are not just the patients dying directly from COVID-19,” Suwalski said. “There are also (patients) who die because of the change of conditions, and even the collapse of the medical system.”

The problem is felt especially keenly in small town hospitals that don’t have the resources of university medical centers, such as the one in Kyjov, a southeastern Czech town of 11,000.

The director of the hospital there, Lubomir Wenzl, says staffing became critical in October as the number of COVID-19 patients doubled over three weeks to almost 60, and 75 of the medical staff fell ill. 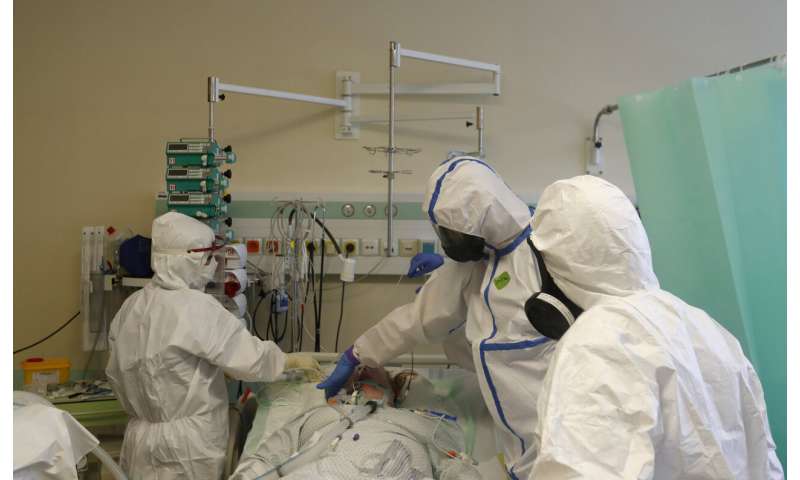 He appealed for volunteers on social media and got so many offers that the hospital could pick who it needed. Mostly, the hospital chose people who have some medical training. They keep a roster of others they can call if they need them.

“I have healthy hands and legs, and this is something as a firefighter I can do,” said Antonin Kuchar, the deputy mayor and a volunteer firefighter who has helped move patients around the hospital.

Vojtech Coufal, a mechanical engineering student at a university in Brno, also answered the call. The 20-year-old has first-aid training and was couriering blood samples around the hospital campus.

While the volunteers’ help is vital, their roles are obviously limited, said Dr. Jiri Vyhnal, chief of the intensive care unit in Kyjov that treats COVID-19 patients in serious condition. 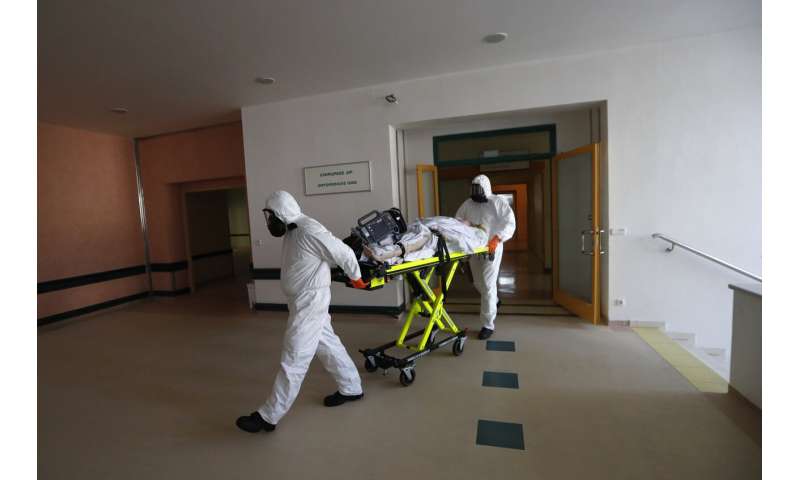 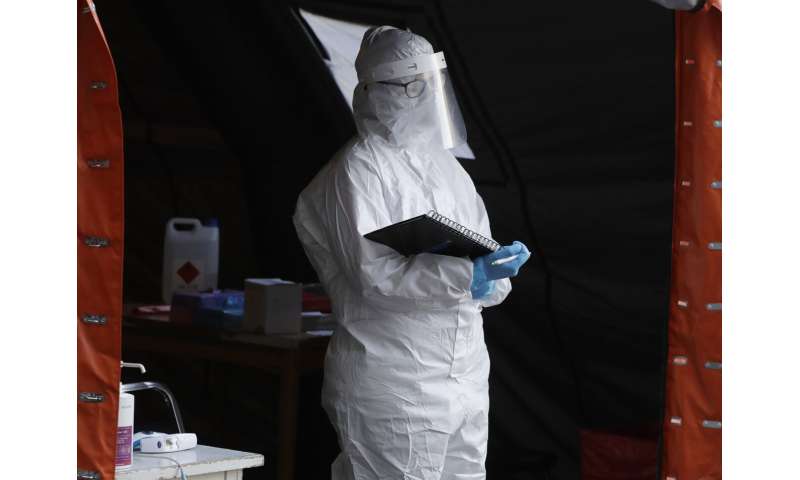 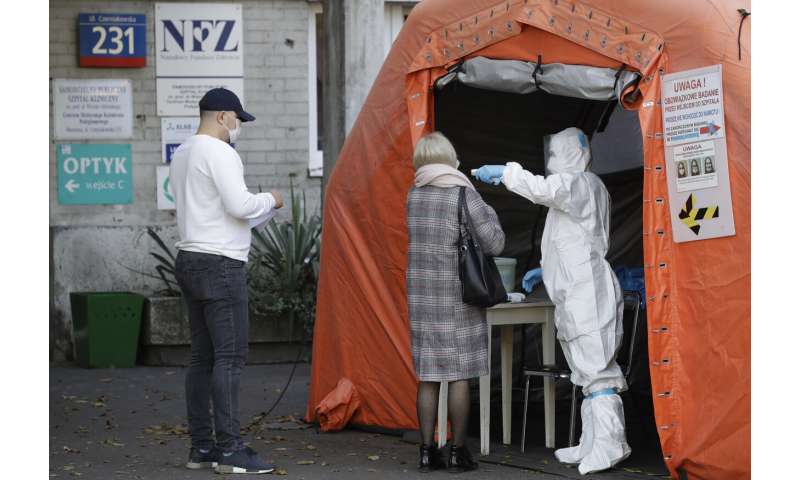 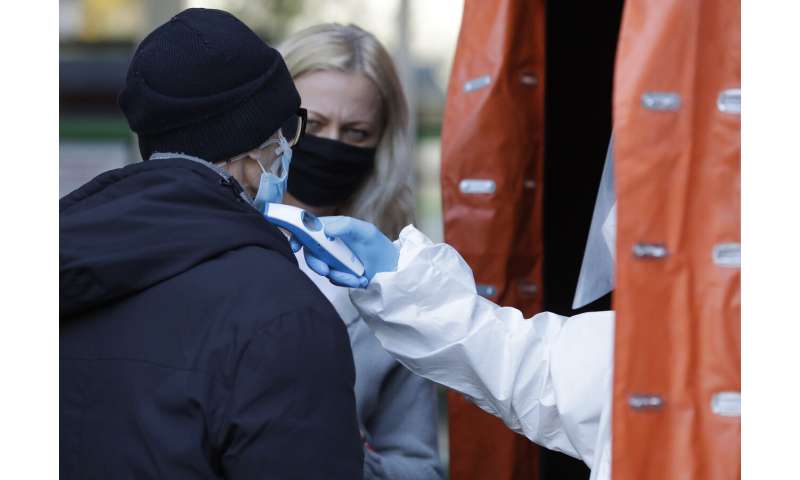 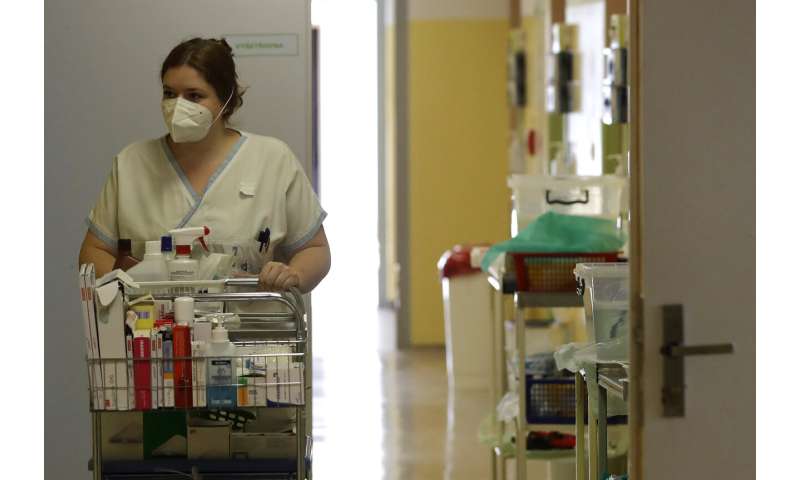 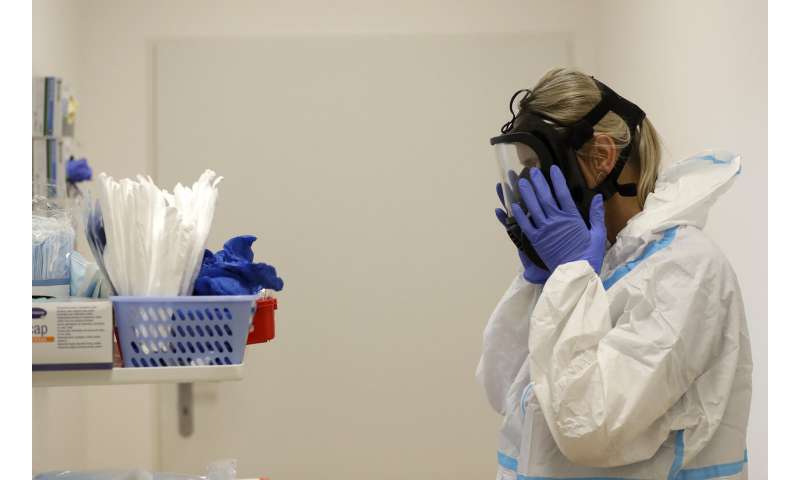 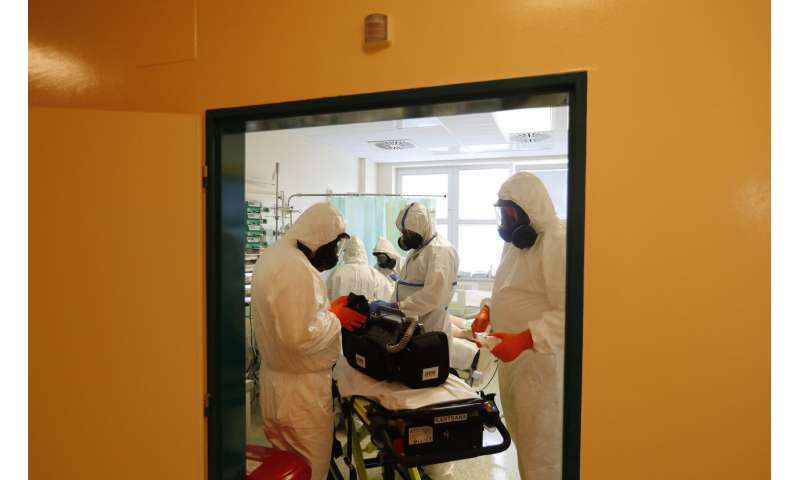 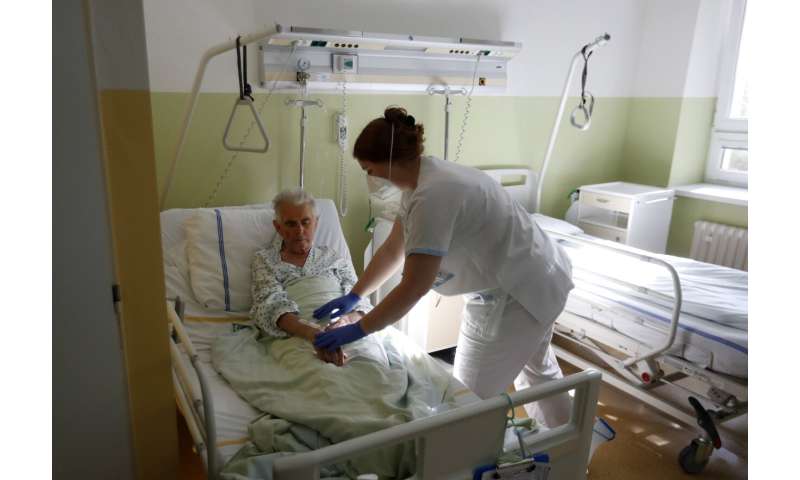 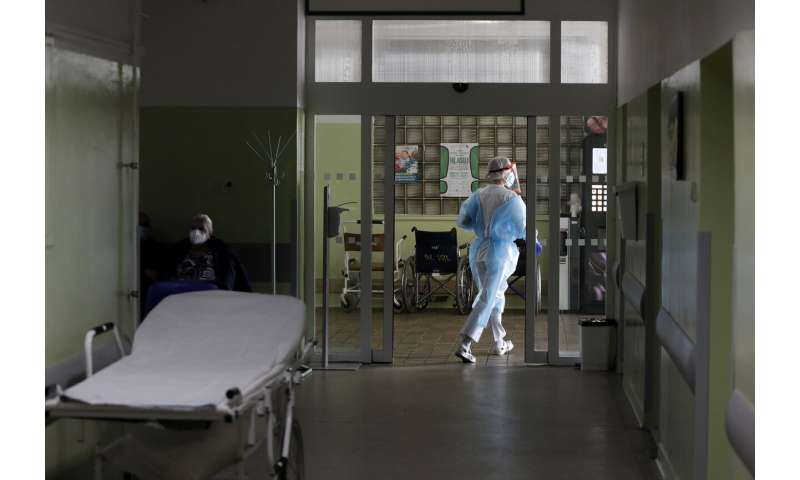 “It’s impossible to replace those doctors by anyone else, because you need a long time to gain experience to become a good intensive care specialist,” Vyhnal said. “The problem is that a small group of doctors and nurses will have to take care of a high number of patients treated with lung ventilation.”

As the number of coronavirus patients rises, the hospital has closed several wards: ones for ear, nose and throat, neurology, rehabilitation and orthopedics.

“We have been forced to stop doing planned operations, but we have to go on with urgent ones,” Wenzl, the hospital director, said.

The intensive care ward, meanwhile, has 11 patients and can accept up to 18, according to Vyhnal.

He said he and his staff are ready to work on their days off “to prevent an Italian scenario,” referring to how hospitals there became overwhelmed.