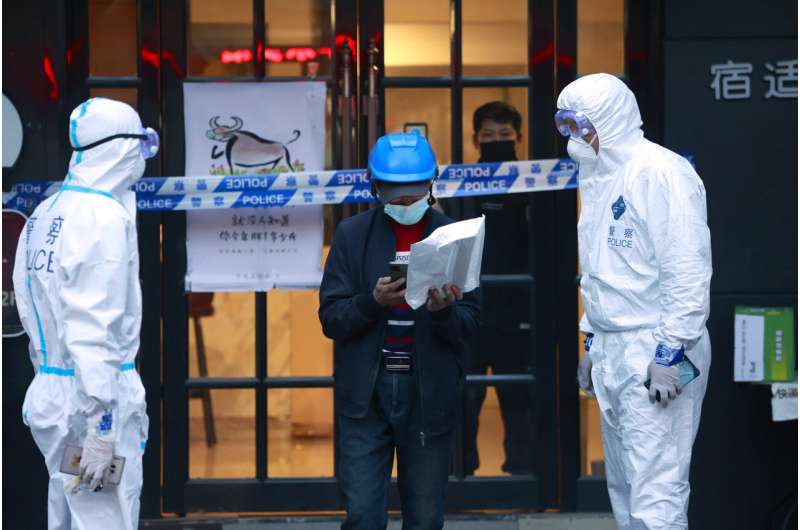 China began its most extensive lockdown in two years Monday to conduct mass testing and control a growing outbreak in Shanghai as questions are raised about the economic toll of the nation’s “zero-COVID” strategy.

China’s financial capital and largest city with 26 million people, Shanghai had managed its smaller, past outbreaks with limited lockdowns of housing compounds and workplaces where the virus was spreading. But the citywide lockdown that will conducted in two phases will be China’s most extensive since the central city of Wuhan, where the virus was first detected in late 2019, first confined its 11 million people to their homes for 76 days in early 2020. Millions more have been kept in lockdown since then.

Shanghai’s Pudong financial district and nearby areas will be locked down from Monday to Friday as mass testing gets underway, the local government said. In the second phase of the lockdown, the vast downtown area west of the Huangpu River that divides the city will start its own five-day lockdown Friday.

Residents will be required to stay home and deliveries will be left at checkpoints to ensure there is no contact with the outside world. Offices and all businesses not considered essential will be closed and public transport suspended.

Already, many communities within Shanghai have been locked down for the past week, with their housing compounds blocked off with blue and yellow plastic barriers and residents required to submit to multiple tests for COVID-19. Shanghai’s Disneyland theme park is among the businesses that closed earlier. Automaker Tesla is also suspending production at its Shanghai plant, according to media reports.

Panic-buying was reported on Sunday, with supermarket shelves cleared of food, beverages and household items. Additional barriers were being erected in neighborhoods Monday, with workers in hazmat suits staffing checkpoints.

Some workers, including traders at the city’s stock market, were preparing to stay within a COVID-19 “bubble” for the duration of the lockdown.

Li Jiamin, 31, who works in the finance industry, said she had packed several days of clothing and supplies, and her company was sorting out sleeping and eating arrangements.

“The overall impact is still great,” Li told The Associated Press, pointing especially to losses suffered by workers in the informal sector who have no such support.

Huang Qi, 35, who works at a local university, said he had undergone a lockdown at home before and prepared for the new round by stocking up.

“I think if the closure continues like this, our school workers will not be affected much, but what about those who work in the real economy? How can their business be maintained?” Huang said.

“I still hope that our society can find a better balance between ensuring normal life and epidemic prevention and control,” Huang added.

Shanghai detected another 3,500 cases of infection on Sunday, though all but 50 were people who tested positive for the coronavirus but were not showing symptoms of COVID-19. While people who are asymptomatic can still infect others, China categorizes such cases separately from “confirmed cases”—those in people who are sick—leading to much lower totals in daily reports.

Nationwide, 1,219 new confirmed cases of domestic infection were detected on Sunday, more than 1,000 of them in the northeastern province of Jilin, along with 4,996 asymptomatic cases, the National Health Commission reported on Monday. 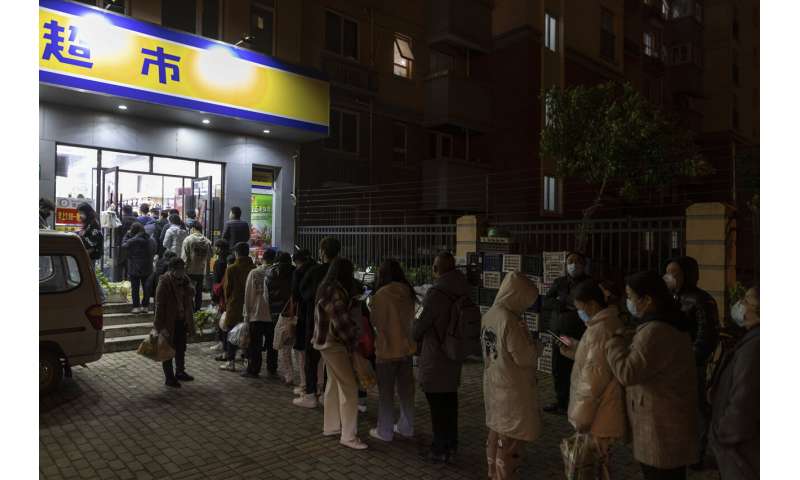 China has reported more than 56,000 confirmed cases nationwide this month, with the surge in Jilin accounting for most of them.

Jilin province is enforcing travel bans and partial lockdowns in several cities, including Changchun, one of the centers of the Chinese auto industry. Although the province has seen more than 1,000 new confirmed cases per day, prevention and control measures taken there do not appear to have been as extreme as in other places.

As has become customary, Jilin has been building pre-fabricated temporary wards to house COVID-19 patients and those under observation as suspected cases. The city of Suzhou, about an hour from Shanghai, as well as Changsha in the country’s center and Shenyang in the northeast are also erecting such structures capable of housing more than 6,000 people.

China has called its long-standing “zero-tolerance” approach the most economical and effective prevention strategy against COVID-19.

The new measures being enforced in Shanghai aim to “curb the virus spread, protect people’s life and health, and achieve the dynamic zero-COVID target as soon as possible,” the city’s COVID-19 prevention and control office stated in an announcement Sunday evening.

That requires lockdowns and mass testing, with close contacts often being quarantined at home or in a central government facility. The strategy focuses on eradicating community transmission of the virus as quickly as possible.

While officials, including Communist Party leader Xi Jinping have encouraged more targeted measures, local officials tend to take a more extreme approach, concerned with being fired or otherwise punished over accusations of failing to prevent outbreaks.

With China’s economic growth already slowing, the extreme measures are seen as worsening difficulties hitting employment, consumption and even global supply chains. With a 21-day curfew in place for all foreigners arriving from abroad, travel between China and other countries has fallen dramatically.

On Friday, the International Air Transport Association announced it was moving its annual general meeting from Shanghai to Doha, citing “continuing COVID-19 related restrictions on travel to China.”

“It is deeply disappointing that we are not able to meet in Shanghai as planned,” IATA Director General Willie Walsh said in a news release.

Still, Shanghai’s announcement of the dates when the two lockdowns would be lifted appeared to show a further refinement in China’s approach. Previous citywide lockdowns had been open-ended.

Although China’s vaccination rate is around 87%, it is considerably lower among older people.