Women who have severe asthma attacks when they’re pregnant are more at risk of deadly complications, a study has warned.

Scientists found mothers-to-be who didn’t control their asthma well may be more likely to develop pre-eclampsia or to have a baby which is premature or underweight.

The babies may also be more likely to have a birth defect such as a cleft lip or a heart problem, or to develop asthma themselves or have pneumonia in infancy.

Researchers suggested the condition results in mothers getting less oxygen and therefore having less to pass onto their baby, affecting its development.

Reducing or stopping asthma medication in pregnancy is common because women worry it could harm their child, the researchers warned, but it could have grave consequences. 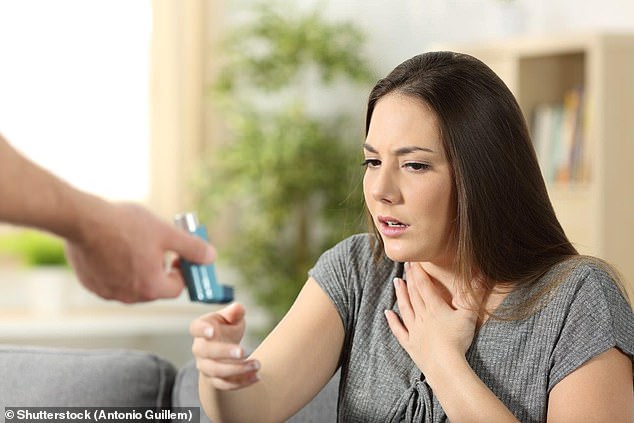 Scientists at the Children’s Hospital of Eastern Ontario, in Canada, did the study by looking at data for more than 100,000 pregnancies between 2003 and 2012.

Women who visited their doctor more than five times, or were admitted to hospital because of asthma, were 30 per cent more likely to develop pre-eclampsia

Pre-eclampsia causes high blood blood pressure and affects around six per cent of mothers-to-be – it can cause seizures which may be deadly for the mother or baby.

Newborns of women with uncontrolled asthma were also found to be 20 per cent more likely to have a health abnormality at birth.

‘If asthma is poorly controlled, patients can suffer with severe symptoms such as wheezing, coughing, or feeling breathless or tight-chested.

‘Previous research has shown that one out of every three pregnant women with asthma will suffer severe symptoms, so we need to understand what this means for women and their babies.’

The researchers also found babies were 20 per cent more likely to develop asthma themselves and more likely to catch pneumonia within their first five years.

Senior researcher Dr Teresa To said: ‘Nearly 40 per cent of pregnant women decrease or stop taking asthma medication because they are worried that it could be harmful to their unborn babies.

‘However, our study indicates that severe asthma symptoms present the greater risk to mother and baby.’

The team hopes the findings will help doctors advise pregnant women with asthma.

Professor Jørgen Vestbo said: ‘Pregnant women who have asthma need regular antenatal care to discuss their symptoms and ensure their medication is effective.’

The findings were published in the European Respiratory Journal.

Pre-eclampsia is a pregnancy complication that causes high blood pressure, which can be deadly for both a woman and her unborn baby if untreated.

It usually begins after 20 weeks of pregnancy in women whose blood pressure is typically normal.

The most effective treatment is an early delivery; usually via C-section.

However, this may not be best for the baby if it is early on in the pregnancy.

Pre-eclampsia affects about 25,000 women in England and Wales each year, and four per cent of pregnancies in the US.

It can have no symptoms if it develops gradually rather than coming on suddenly.

A blood pressure reading above 140/90 millimeters of mercury (mm Hg) on two occasions is usually the first sign.

Sudden weight gain, and swelling in the face and hands, are also symptoms, however, these can occur during normal pregnancies.

Pre-eclampsia is thought to begin in the placenta when its blood vessels narrow and do not react to hormones properly.

This reduces the amount of blood that flows through them.

Its underlying cause may be genetic, due to a problem with a woman’s immune system or existing blood vessel damage.

A woman is more at risk if she, or a member of her family, suffered from pre-eclampsia before.

The risk is also highest during the first pregnancy, and if a woman is over 40; obese; black; having a multiple birth, like twins; or conceived via IVF.

If untreated, pre-eclampsia can restrict a baby’s growth or cause it to be delivered early.

The placenta can also separate from the uterus wall, which can lead to severe bleeding.

A woman may also suffer seizures, organ damage and even heart disease as a result of untreated pre-eclampsia.

Although treatment is usually inducing labour, if it is too early to deliver the baby, medications may be prescribed to lower a woman’s blood pressure.

There is no clear advice on how to prevent pre-eclampsia, however, research suggests taking a low-dose of aspirin and calcium supplements may help.

Pregnant women should talk to their doctor before taking any drugs or supplements.